Sony Music // Unrated // December 6, 2005
List Price: $19.98 [Buy now and save at Amazon]
Review by Randy Miller III | posted January 5, 2006 | E-mail the Author
Though their international success began only two years ago, Scotland's Franz Ferdinand has already established a reputation for their catchy, kinetic brand of rock. Named after the infamous Archduke whose murder helped start the first World War, the four-piece began back in 2001 the same way most bands do: as friends, old and new, with a common interest in music. Art was another driving force behind their mission statement, though; in fact, the earliest Franz Ferdinand shows incorporated both mediums at rave-like performances held in an abandoned Glasgow warehouse nicknamed "The Chateau".

During the next two years, Franz Ferdinand's first official collection of recordings---the Darts of Pleasure EP---was released through Domino, while gradual word-of-mouth helped their self-titled debut LP become a slow-burning international smash. Their sophomore album, You Could Have It So Much Better, was released in the third quarter of 2005 to generally positive reviews from critics and fans alike. I didn't care for it as much as the first LP, but there's a drive and energy found in Franz Ferdinand's music that really makes it hard to hate. If you're a fan of catchy, guitar-driven rock with sharp lyrics, you'll certainly find much to enjoy.

That's enough for today's history lesson, though; after all, any fans eager enough to purchase a live DVD release should know this stuff already. Cutting right to the chase, Franz Ferdinand Live is a 2-disc release containing roughly 3 hours of the group's performances from around the world, though it looks like nearly all of the included material is from the self-titled debut. This, of course, leads to some serious overlap: many of the same cuts are played during all three "sets" (a miscellaneous collection plus two complete concerts), so you better really love these songs. Combine this with last year's re-release of their debut LP (which added a few bonus tracks) and you've got the most milked catalogue of modern songs since Maroon 5's Songs About Jane. Below, you'll find a complete list of included content on this release, while bonus features will be covered later. 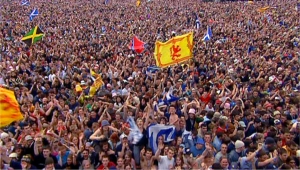 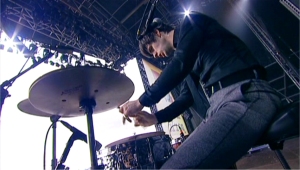 Even with the overlap, it's tough to complain: for less than $20, you're getting roughly 180 minutes of concert footage and a few nice bonus features. The songs are played with raw energy and the crowd seems to love every minute of it. It certainly doesn't offer anything new to the world of concert recordings, but it's a solid collection that shows why Franz Ferdinand is so popular.

With that said, this disc would've received a higher rating if it were more condensed: whether it's music, movies or any other medium, too much padding always drags the main feature down. Even so, it's more of a go-to disc best viewed in smaller chunks; in fact, I wouldn't imagine anyone but the most ardent fans of Franz Ferdinand to watch it the whole way through every time. Pound for pound, though, it's a nicely packed 2-disc set that's great for those on a budget.

Any fan of concert DVDs knows that the technical presentation is the most important factor, and Franz Ferdinand Live shouldn't disappoint. The 1.78:1 anamorphic widescreen transfer looks good, but a small amount of pixellation and murkiness are present due to the lighting conditions (though the outdoor venues looks great). Overall, it's a solid presentation that gets the job done nicely.

All live footage is presented in Dolby 5.1 Surround Sound or uncompressed PCM Stereo, both of which sound very good. The 5.1 mix actually sounds a bit less punchy in comparison, though the live atmosphere is preserved more faithfully. No optional subtitles (or "lyrics", if you will) have been provided for the concert footage, but they're available during one of the bonus features. 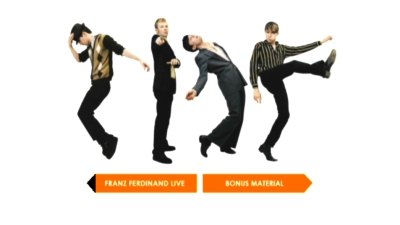 Featuring a simple, stylish design (seen above), the menu navigation is a bit strange but easy to get used to. Each of the songs is selectable as its own chapter stop, while no layer change was detected during playback. This 2-disc release is housed in a clear DVD-sized jewel case and tucked inside a glossy slipcover. Oddly enough, the singe-width case has only one spindle and both discs are stacked on top of one another. It's a basic presentation, but the price is right.

Bonus Features:
The modest selection of extras begins on Disc 1 with Tour de Franz (30:49), a loose and informal behind-the-stage documentary. It's not much different than your typical "on the road" piece, but the band members' good-natured attitudes and camaraderie help move things along nicely. Also on board is Franz Karaoke, a pair of sing-along tracks which include "Take Me Out" and "Dark of the Matinee" (available with or without the original vocal tracks), while the band's Original Website is also presented here as a DVD-Rom feature. Disc 2 only features a trio of Bonus Live Performances: there's "Can't Stop Feeling" and "Dark of the Matinee" (both recorded in Auckland) as well as "Take Me Out" (recorded at Byron Bay). Overall, it's a fairly solid lineup that only adds to the content value of this low-priced release. For those keeping score at home, all included bonus features are presented in either 1.33:1 fullscreen or 1.78:1 non-anamorphic widescreen.
Final Thoughts

Yeah, it's a bit of overkill, but at least Franz Ferdinand Live offers fans plenty of bang for the buck---in fact, this release only provides more proof that CDs are way too expensive in comparison. The technical presentation is solid from top to bottom, while the assortment of bonus features only sweetens the pot even more. Those new to the band may want to grab a proper album first, but anyone who enjoys Franz Ferdinand's brand of music simply can't go wrong with this one. Overall, it's a solid 2-disc set that's easily worth your time and money. Recommended.