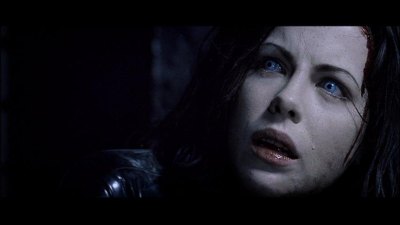 Usually my first-impression opinion of a movie is the one that sticks with me over the years. A movie I love may go up or down a few pegs, and the ones I hate I just might grow a small amount of tolerance for, but generally I'm pretty consistent with my early calls.

Underworld is a movie that's gotten a whole lot better for me on repeat viewings, and it was with some reluctance that I went back to my original review to double-check my early criticisms...

"So simple a concept that it makes one wonder why it hasn't been a movie before today: a centuries-old battle between secret societies of vampires and werewolves that takes place in the dank alleys and clammy sewers of EveryGotham, U.S.A. Pair this conceit with a knowing nod to Romeo and Juliet and you're looking at an atmosphere-heavy genre concept that feels like a can't-miss proposition.

Pre-release hype and an ultra-cool trailer had me fairly excited for Underworld, which makes it all the more disheartening to announce that the flick's only marginally successful; the worthwhile spots are absolutely cool, the gothy production design makes a lasting impression, the slick and fluid cinematography adds a glossy sheen to the proceedings, and the "Battle of Immortals" concept is periodically plumbed for some truly enjoyable cinematic mayhem. But... Great gosh amighty does Underworld pack an unending amount of lengthy and confusing exposition scenes, plot threads and supporting characters that repeatedly double-back on one another, an editing style that borders on the aggressively choppy, and wristwatch-worthy dry stretches into its 121 (!) minutes.

-- OK, that seems like a fair piece of criticism, but here's where my new perspectives kick in. Repeat viewings of Underworld have allowed me to sit back and appreciate not only the kick-butt action sections, but also to really focus on the (admittedly kinda convoluted) plot threads and piece them all together. And beyond that, I grew to actually enjoy the back-stories, the subplots, and even the somewhat heavy-handed parcel of exposition segments that come during Acts II & III. What I was expecting the first time around was non-stop action, but subsequent visits to the Underworld helped me to dig the whole story-packed package.

And if I could grow to admire a version of the film that's even longer (!) than the original 121 minutes, that's a testament to the creators and craftsman who toiled to make Underworld something more substantial than just a rock 'em sock 'em vamps vs. wolves spectacle. And since the filmmakers have a clear intention of following these story lines through via sequels, comic books, etc., I can now acknowledge Underworld as the beginning of a pretty nifty soap opera. Only it's a soap opera with drooling monsters, bloodsucking beasts, and one seriously smokin' heroine in the center of it all.

"On a purely visceral scale, Underworld scores a lot of points. Picture Blade meets The Crow or something that could be called An English Werewolf in Dark City and you're getting a good idea of how cool Underworld looks...but you're also getting a clear indication of how derivative Underworld truly is."

Yeah, that's one minor criticism that I'll stick by; Underworld really does feel like it was cobbled together from the parts of a half-dozen other, better movies. But Wiseman and company are also canny enough to strike a bit of new ground, too. The flick looks absolutely, darkly gorgeous, and it's clear that the filmmakers were aiming for something more than just a "one-off" monster movie. There's some really fascinating stuff going on in this flick, just enough to have me suitably psyched for Parts 2 & 3. And for a movie to get better on repeat viewings and leave you hungry for future installments, well, that's a movie that's doing something right.

First came the Underworld Special Edition, which had a slick transfer, a solid audio track, and a firm fistful of extra goodies. Then came the Superbit and the Extended Edition, which jettisoned the original commentary tracks (in favor of a new one) but brought over all the other supplemental material. Now comes the "Deluxe Edition," which is nothing but the Extended Edition with a sequel promo disc snot-glued to its hide. (I'm sorry, but that snot-glue? Even more fun than bubble wrap.)

What's cool about the Extended Version of Underworld is not just the addition of a few new scenes and even more of the sinfully hot Sophia Myles, but also that there are alternate takes used here. Which means that if you're a hardcore fan of the vamp-tastic flick, you'll be the one who'll notices the subtler differences between this and the theatrical cut. Most of the hardcore Underworlders I know think the Extended Edition is considerably better than the original cut, whereas a few of my pals think this version is just longer. Period.

Here at DVDTalk we've got no shortage of Underworld reviews. For reviews of the original SE, check out the musings of G. Noel Gross or Aaron Beierle. For some Superbit banter, you can pick between Ian Jane and Mr. Beierle. And for exceedingly excellent Extended Edition analyses, visit with the illustrious Randy Miller III or (once again) the lycan-lovin' Aaron B.

Video: The tech specs are nothing short of fantastic here. The Extended cut is presented in a lush, dark, and lovely anamorphic widescreen (2.35:1) transfer, perfect for turning the lights down... Audio: ...and the speakers up! The DD 5.1 Surround mix is laden with growls, gunfire, and all sorts of random mayhem. Former Tangerine Dream-er Paul Haslinger's moody score is also brought home in fine aural form. (Why doesn't this composer work more often??)

Extras: Long story short: If you already own the 2-disc "unrated extended" Underworld DVD, then you simply do not need to purchase this quintuple-dip release. For your 15 bucks here's what you'll be getting that's new:

A separately-packaged platter that offers a 5.5-minute making of featurette centering on Underworld: Evolution, a trailer for the sequel, a few comic book pages, and some pointless DVD-ROM flotsam. Attached to this promotional disc, which frankly Sony should be giving away for free, is the 2-disc extended set that you probably already own because you're an Underworld fan. The only good news comes to those who held out on buying the Extended Edition because of the hefty price tag, because you can now snag the set you've had your eyes on for about 15 smackeroos. Prior to this week, you couldn't get the Extended Edition for less than 20 bucks, which makes this a good deal on a solid package.

Just don't buy it for the third disc, because you're getting rooked.

Anyway, I'll recap the goodies just because we're both here and all Underworld-ed up.

Disc 1 contains an audio commentary with director Len Wiseman, his achingly hot actress wife Kate Beckinsale, and third wheel actor Scott Speedman. Those who enjoyed the more technical commentaries from the original DVD are in for a surprise here, as the trio is anything but serious during this yak-track. The film does get some attention, but the participants are enjoyably laid-back and funny here. Good fun.

There's also 3.5 outtake reel that's worth watching just for the fact that we get to see Katey B. smile in the wonderful leather costume, a pair of TV spots, and a bunch of trailers for Underworld, Hellboy, Resident Evil: Apocalypse, and Spider-Man 2.

Fang vs. Fiction runs about 48 minutes and plays like a really cool History Channel special, only with a lot of short Underworld clips jammed in there. Still, fans of this type of movie will undoubtedly devour this clinical look at the histories of vampires and werewolves. It might be a bunch of hooey, but it's fascinating hooey all the same.

Moving on to disc 2 we find some old stuff and some new (well, new to the Extended Edition, anyway) in the form of seven featurettes:

The Making of Underworld (12:58), Creature Effects (12:26), Sights and Sounds (8:49),and Stunts (11:33) have all been ported over from the original Special Edition, and they do a solid job of bringing different threads of the process to light. Expect lots of movie clips, tons of talking-head interview segments, and a few welcome doses of goofiness and levity.

New to the Extended Edition are Designing Underworld (10:35), The Look of Underworld (19:10), and The Visual Effects of Underworld (9:52), each of which take a look at the film's more technical assets, from props and weapons to production design, storyboards, and creature creations.

Last but not least are a music video for Finch's "Worms of the Earth," a 48-page comic book adaptation, and a 16-page production artwork booklet.

I gave Underworld a firm 3 out of 5 stars upon its original theatrical release, and I'm not ashamed to admit that I've since upgraded it to a solid 4 out of 5. Lots of movies fade and flounder after repeat viewings, but Underworld slowly wormed its way into my good graces, and now I consider myself a pretty big fan.

If you've been holding out for the 2-disc Extended Edition, and waiting for a solid sale price, your wishes have been answered, as this re-package comes with a pretty sweet price-drop. But if you already own the EE, there's no good reason to drop an extra fifteen bucks. All you'd be getting is a dinky little promotional disc that you'll never watch more than once.