Waiting... desperately wants to be "Clerks in a restaurant" or "Office Space Goes to Bennigan's." It's a flick populated by broad, goofy caricatures who lampoon the flaws and foibles inherent in one of the world's most unrewarding professions. And, for about 65% of the flick's running time, it succeeds in fine form. The rest of the stuff? Not to my tastes. 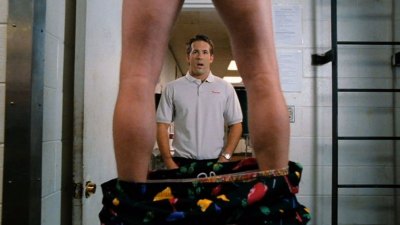 I worked in an Applebee's for the better part of three years, so believe me when I tell you that Waiting...'s best bits (of which there are quite a few handfuls) are clever, knowing, and witty gags indeed. From the colorful cast of misfit food-servers to the raunchy and irritable kitchen-staffers, the jerkface customers and their paltry gratuities, the corporate-stooge manager, the camaraderie, the frustration, and the parties. Practically all of this stuff shines in Waiting... First-time writer/director Rob McKittrick successfully skewers so many of the restaurant-worker conventions that I'm willing to forgive a few of the filmmaker's more annoying indulgences.

Subplots involving a new hire, a "testicle" game, a waiter's "stage fright" at the urinal, and another server's impending promotion ... all of these bits start out amiably goofy enough -- before they're run into the ground in merciless fashion. A more experienced director would know to keep these subplots balanced in a more efficient fashion -- or, more likely, he'd simply realize that they're not all that funny and they'd soon hit the cutting room floor.

But for all its indulgences and infantilism, there's some really, truly funny stuff to be found here. McKittrick was fortunate enough to get Ryan Reynolds as his leading man -- and nobody does "old-school Chevy Chase" like Ryan Reynolds does. The rascally actor is aloof, sarcastic, dismissive, and entirely enjoyable here, as he often is when he's makin' with the funny. Other members of the ensemble who earn their paycheck include David Koechner as the mega-dorky manager, Dane Cook as a furious line-cook, and Alanna Ubach as a waitress just one step away from a volcanic meltdown. Oddly, the normally-quite-funny Anna Faris and Justin Long aren't given all that many punch-lines, although they do fine work with the skimpiesh roles they're given.

The trailers and posters are accurate: If you've ever waited tables in an Applebee's, a Bennigan's, a Friday's, a Ruby Tuesday's, or any of the other bland corporate food stations, you'll experience a lot of familiar torture as Waiting... plays on. But the fun part is: You're not the server anymore. Sure, the flick panders a bit and relies way too heavily on the easy gross-out gags, but I choose to see those bits as the half-decent appetizers that complement the main course. And as a parody of the corporate restaurant scene, Waiting... has more than enough snarky insight to balance its numerous and often unnecessary trips to the potty.

And after a second visit to "Shenaniganz" restaurant, I'm happy to note that the stuff I found funny the first time around really does stand up pretty well. What I particularly enjoyed during my second meal was the eclectic ensemble cast and a few previously unnoticed streaks of real chemistry between the young comedians. Waiting... might not turn out to be the next Dazed & Confused, but it's got a lot of funny people in it, several of whom are just getting started, career-wise.

First-timer Rob McKittrick has always maintained a very (humorously) humble and self-deprecating attitude regarding his debut flick, and I think he'd be the first to acknowledge the movie's shortcomings and missteps, but the guy's also to be applauded from bringing together a really solid ensemble cast while making sure that everyone onscreen gets to dole out a few chuckles of their very own. 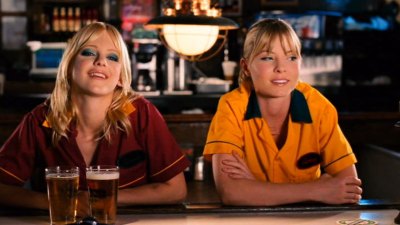 Video: Even as a fan of the flick, I must admit that Waiting... looked a little, well, less than stellar upon its theatrical release, but this anamorphic widescreen transfer is an improvement in just about every conceivable fashion. It's still not a flawless transfer (what's with all the grain?), but at least it's a whole lot more colorful than the flick looked in theaters.

Audio: Surround 5.1 or 2.0, with optional subtitles in English and Spanish. No problems on the aural presentation, which is a term not to be confused with "oral presentation," for a variety of reasons.

First up on Disc 1 is a collection of 13 deleted scenes which, when viewed via "Play All," run just over 7 minutes. There's a few chuckles in here, but it's clear that most of these moments were cut for good reason. 19 outtakes / alternate scenes are also included, and this batch of material nets you an additional 15 minutes of additional comedic nastiness. 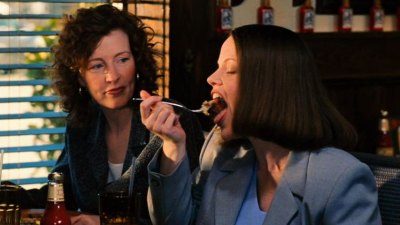 Then there's a 19-minute behind-the-scenes piece called That Little Extra, which consists of eight individual chapters that can be enjoyed separately or as one big block: In the Beginning, Casting, Off to New Orleans, Designing Shenaniganz, The Movie Geek Shot, The Game, First Time Director, and Credits. It's a fun surface-look at the process, delivered with lots of goofy interview sections and appropriate irreverence. Also, here's where you'll find that infamous video clip of Luis Guzman berating his first-time director with merciless abandon ... or is he?

Rounding out the first disc are a Waiting... soundtrack preview and a pair of trailers for Van Wilder and Ultimate Avengers: The Movie.

Switch over to disc 2 and you're in for some really heavy-duty goodies. The Works is a much more expansive and informative look at the making of Waiting...; it's a feature-length documentary composed of 16 chapters, all of which I'll mention right now: The Beginning, Casting I: The Leads, The Look, The Kitchen, Casting II: Servers & Bartenders, Music, The Rap, Casting III: Newbies, Fraternization, Accomodations, The Fight, Casting IV: The Veterans, Jeff vs. Rob, Casting V: And ... Dane Cook, Improv., and Last Call.

In addition to being a really raucous and all-encompassing look at the flick's production, this doco offers a few wacky little diversions: click ENTER on your remote when you see a pulsating hot dog and you'll be taken an isolated scene (or "Side Dish") from the movie, complete with audio/video commentary from folks like cinematographer Matt Irving, production designer Devorah Herbert, and actors Justin Long, Kate Doubleday, Bob Benedict, Alanna Ubach, Andy Milonakis, Max Kasch, John Francis Daley, Skyler Stone, Vanessa Lengies, Dane Cook, and Dave Koechner. Various producers and contributors populate the "main" section, most notably casting director Anne McCarthy, producers Dean Shull & Rob Balis, composer Adam Gorgoni, and the profane, enthusiastic, and wise-assed writer/director Rob McKittrick. None of the aforementioned filmmakers seem to take Waiting... all that seriously, and they strike just the right tone between "we like our goofy little movie" and "ok, it's a really goofy movie." The contributions from only McKittrick, Cook, Milonakis, and Koechner are worth their weight in tainted steak.

You might be wondering why a movie like Waiting... needs to have an 85-minute "making of" documentary included, which makes sense since the movie itself barely runs 90. The crafty DVD constructors employed by Lions Gate have already predicted your bewilderment, which explains why, if you click on the pulsating hot dogs, "The Works" runs well over two hours in length. And the whole thing is pretty damn funny ... provided, of course, that you dug the movie. If you hated the flick, then you'd be a damn fool to spend two hours on the "making of" documentary. wouldn't you? Be honest: you would be.

If you're still craving some more goodies from those wacky Shenaniganz servers, then settle in for the Expanded Telestrator Commentary, which is far and away the most revolutionary form of Special Feature since the invention of the "Weblinks" option. Here's how it works: You watch the major motion picture entitled Waiting..., while McKittrick and Balis use an electric pen and freeze-frame/rewind technology to behave all sarcastic and snarky-like, stopping periodically to share a production story that's either (relatively) interesting or downright silly. Some would call this sort of extendo-commentary "overkill" for this type of movie, but hey, let's hear it for the Waiting... fans getting their money's worth, eh? (By using the rewind and freeze options, McKittrick and Balis turn a 93-minute movie into a 130-minute commentary presentation. Heh.) 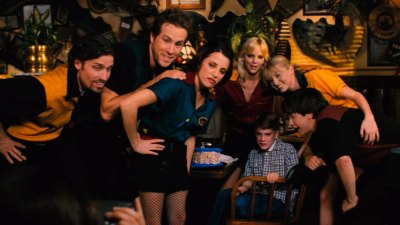 So if that 5+ hours of material isn't enough to keep your belly full, check out Sending It Back: The Real Dish on Waiting Tables, which is 6-minute visit with a trio of former servers who have a few war stories to share. Or if you'd like another taste of the Side Dishes that were doled out during "The Works," you can access them by their own private menu.

I still think that Waiting... relies a bit too heavily on some of its relatively weakest pieces of schtick, but the flick still makes me laugh with an impressive consistency. Warts and all, I dig Waiting..., and I suspect it'll gain a bunch of happy new fans once this DVD starts making the rounds.

Plus, I don't care if you're talking about The Wizard of Oz, Citizen Kane, or Ernest Goes to Jail; a DVD package like this is to be commended. You'd think a low-budget comedy that grossed $17 million worldwide would warrant maybe a director's commentary and a 3-minute EPK piece, but it's pretty obvious that a lot of effort went into this 2-disc package ... as if someone out there in DVD-land already knew that Waiting... was a home-based cult flick waiting to happen.

Anyway, funny flick plus fantastic extras equals a Highly Recommended DVD release. The skeptics among us might want to dip their toe in with a rental at first, but the ones who end up fans will absolutely want to toss this 2-discer into their permanent collection.

(Portions of this raving tract have been reprinted from my eFilmCritic theatrical review of Waiting... because, as far as I know, it's not illegal to plagiarize from one's own self. Then again, I'm not exactly a lawyer.)