I wouldn't go as far as to call Saw 2 a cerebral experience, but there's just something devilishly appealing about horror material that works in your brain and not just in your gut. Throughout both of these rusty little Saw movies, I'm posed with the question of "What would you do if you had to saw your own foot off / dig through a corpse's innards for a key / remand another person to death so that I might survive?" Saw 2 is the horror equivalent of that "Book of Questions" that we all bought and then broke out at parties. Much of the movie is also your standard slasher stew mixed with some half-decent police procedural stuff -- but when Saw 2 gets rolling with those gruesome, gritty puzzles, I think it's the coolest thing this side of Clive Barker's nasty ol' horror stories. 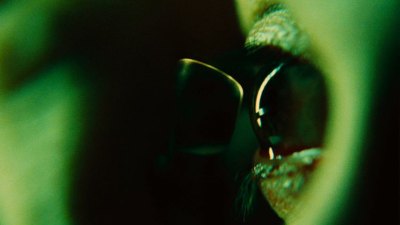 This sequel doesn't slavishly follow up with the precise ending of Part 1, but it comes close enough to keep the loyal fans entertained. Suffice to say that sick ol' Jigsaw is up to his nasty tricks again: The prologue delivers a sequence in which one unfortunate guy gets his head squashed inside of a nail-coated, metallic venus-fly-trap mask thingamajig. In this sequence some see pointlessly ugly desperation and gore for gore's sake. I see a kinetic, exciting, and enjoyably intense inner struggle that ends with a crimson thwack.

In come the police, and this time they have very little trouble apprehending the creatively kooky killer. Detectives Mason (Donnie Wahlberg) and Kerry (Dina Meyer) are on the case; he's got a short temper and an estranged son, while she's got a lot of exposition to unload and a pretty face. So over the course of one extended interrogation, Jigsaw reveals that not only does he have eight people trapped inside a house filled with poison gas and horrible deathtraps, but also that we can all watch this sinful spectacle via live video!

Imagine Mason's amplified concern when he realizes that his teenage son is in among the poisoned captives.

And back and forth we go. For a little while we stick with Mason and Jigsaw as they throw dialogue at each other, most of which has to do with threats of violence or ruminations on the nature of human mortality. Some of this material gets a bit redundant as the running time wears on, but Saw 2 moves at such a brisk clip that you'll just begin to notice the strain as the Act III insanity starts to kick in.

When we're not dealing with Mason and Jiggy, we're trapped in the death-house with eight of the most desperate whiners you ever will meet. True that there's a good reason for this crew's collective crankiness, but aside from Mason's son Daniel (Eric Knudsen) and veteran Saw-avoider Amanda (Shawnee Smith) there's not much offered on the character menu. The soon-to-be corpse cast-members are given perhaps one solid personality trait apiece to show off, which they do just prior to their inevitably icky demise. 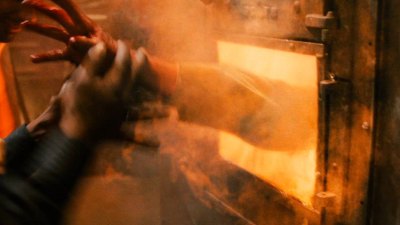 Perhaps it's just the dormant Nine Inch Nails freak in me that loves the Saw flicks' cold and gruesome exteriors ... but mainly I'm just sick to death of the ridiculously lame and consistently worthless deluge of PG-13 "horror" movies that offer nothing but formulaic stories, moronic dialogue, and photogenic TV actors who are way out of their element. Maybe it's just that I've been so starved for horror flicks that don't skimp on the grand guignol nastiness that I enjoy so much that I'm left over-praising movies like Saw, May, The Descent, Hostel, High Tension, and, yes, Saw 2. (Or heck, maybe I secretly work for Lions Gate Films!) But I don't think I'm overcompensating when I say that Saw 2 is one of the better horror movies to hit the screens in '05 -- which is a compliment to the sequel-makers, but is mainly an indictment of the current state of the horror genre in general.

Saw 2 might have been a "bang out the screenplay, shoot it, and get it into theaters quick" sort of sequel (and it so totally was), but there seems to be a real commitment here to pleasing the hardcore horror fans. It's certainly not a flawless effort, but it's good, gory entertainment all the same, and let's face it: Not many horror sequels can make that claim.

Video: It's a richly red and creepy-crisp anamorphic widescreen (1.78:1) transfer. Last year we noticed a big improvement in picture quality between Saw and Saw: Uncut, but Part 2 looks pretty damn excellent the first time out.

Audio: Choose between Dolby Digital 5.1 Surround EX (which is damn good) or DD 2.0 Stereo. Optional subtitles are available in English and Spanish. 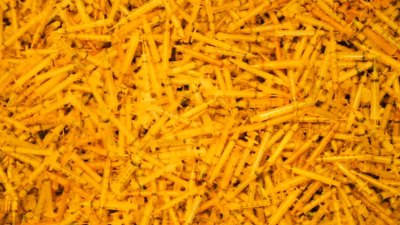 OK, any Sawfan worth his or her salt is already well aware of the release pattern by now. Come October we'll have Saw III in the multiplexes and a brand-new 2-disc "Unrated" Edition of Saw II hitting the DVD shelves, with all new gore-splatters, extra features, and blood-soaked cover art. So if you're planning to hold out for that release, I can't say I'd blame you. But this one-disc theatrical-cut DVD still has some half-decent bells and whistles to offer.

First up is a feature-length audio commentary with director/co-writer Darren Lynn Bousman and actors Donnie Wahlberg & Beverley Mitchell. The trio keep the chit-chat coming fast and furious with equal parts affection, self-deprecation, and attention to detail. Hardly the most production-oriented chat-track you'll ever hear, but certainly fun enough for fans of the flick. (And yes, Mr. Bousman drops a few mentions about an "uncut edition.")

The rest of the extra goodies come in featurette form: Jigsaw's Game is a 3-minute piece of pre-release-ish teaser puff. Under the heading "The Traps of Jigsaw" you'll find four on-set/interview segments that focus on The Head Trap (4:19), The Needle Pit (8:29), The Hand Trap (2:42), and The Furnace (3:54). Pretty nifty to see how the nastier stuff was pulled off, but there's nothing too exciting here.

Bits & Pieces: The Props of Jigsaw (4:26) covers some of the more random traps, tricks, and nasty treats.

Under the "Storyboard to Screen" heading you'll find a quartet of scenes from the flick, as compared to the early storyboard layouts: Death Mask (3:39), The Furnace (3:23), Needle in a Haystack (2:43), and Jigsaw's Lair (1:45). There's also a conceptual art gallery that consists of 19 pieces of production art.

Attached to the main menu screen you'll find a dedication to producer Gregg Hoffman, who died way too young at the age of 42. Here Darren Bousman contributes a memorial letter to his friend and collaborator.

Rounding out the goodie bag is a collection of trailers for Saw II, the Saw Uncut Edition, Three...Extremes, an Audition Special Edition, Tamara, and Ultimate Avengers: The Movie. 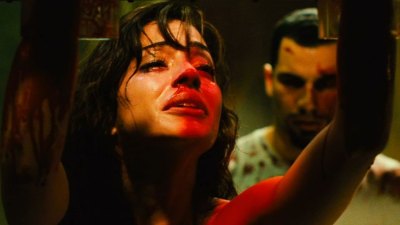 I've read and respected several unflattering opinions on both Saw movies, and I can readily acknowledge both of the films' flaws, but they absolutely work for me, warts and all. Therefore, I've absolutely no problem recommending this sequel to those who adored the first entry, or anyone else just looking for a cold blast of unfiltered horror nastiness. Plus the fact that this sequel doesn't simply "suck" is reason enough for celebration. That it's actually pretty damn entertaining is, to be honest, only one of the most enjoyable shocks.

DVD-wise, Saw 2 works, with a freaky main feature, a solid yack-track, and a small handful of worthwhile featurettes ... but if you're the sort of gorehound who loves Saw 2 enough to buy the DVD, you're probably the sort who's planning to wait for the late-year Special Edition release. This package should hold you over until the SE hits, at which point you can eBay the thing.

(Some of the material you just read comes from my theatrical release review of Saw 2 at eFilmCritic. Lazy me, right?)