Growing up as true-blue movie-geeks in training, my neighborhood pals and I loved the "National Lampoon" comedies. Granted, there were only three of 'em by that point that we could get our fingers on: Animal House, Class Reunion, and Vacation, two of which I still love, and Class Reunion, which really, really stinks. But as far as the "National Lampoon" magazine was concerned, we were completely lost. (Hey, we were 13!)

When it came to witty literature, my chums and I gravitated mainly toward Mad Magazine, with infrequent visits to Cracked, which, let's face it, was never all that funny. So when we heard that there'd been a "Mad Magazine Movie" produced, we just went nuts trying to find it. We'd search every video store we could, scan the HBO listings for a screening, heck, one of my friends even mailed the magazine and inquired about Up the Academy. He got no response.

It wasn't until several years later that I was finally able to sit down and experience Up the Academy, a movie that, by that point, felt like a Holy Grail of my misspent childhood. To say the experience was a massive disappointment would be an understatement, and having now seen the flick a full three times, I can plainly understand why several involved parties lobbied to get their names removed from the film.

(Mad's publisher, William Gaines, tried and failed to get the "Mad Magazine" banner stricken from the movie, but actor Ron Leibman was a little more successful: Despite having a rather large part in Up the Academy, Mr. Leibman's name is nowhere to be found on the opening or closing credits of the flick, nor on the trailers, the posters or the DVD cases.)

As a clear and obvious attempt to ape what made "that other magazine's college comedy" so outlandishly successful, the Academy producers enlisted sitcom scribes Tom Patchett and Jay Tarses to pen a military academy equivalent to what went on at the Delta House. (The pair cut their teeth on The Bob Newhart Show before moving on to write a few Muppet movies and create ALF.)

The setting is the oppressive facility known as "Weinberg Military Academy," which is funny mainly because it's a Jewish name, and partially because it's also my name. Plopped into this world of rules and regulations are a collection of troublemaking young hooligans. There's Chooch (Ralph Macchio), the son of a mafioso kingpin; Eisenhower (Wendell Brown), the slick black dude; Hash (Tommy Citera), the mega-rich Arab kid; Rodney (Harry Teinowitz), the nauseating slob; and nice-guy Oliver (Hutch Parker, in his only acting role to date, but who is presently the President of Fox, so I guess he survived Up the Academy.)

And then there's Rob Leibman as Major "Liceman," a typically snarling and hateful villain, but here's the twisted part: In a movie full of pretty awful comedy, Leibman delivers the most enthusiastically entertaining component of the whole movie -- and this is the guy who demanded his name be stricken from the credits!

Also of mild interest are the facts that Up the Academy marks an early effort from modern day mega-producer Bernie Brillstein and came to the screens courtesy of celebrated indie director Robert Downey Sr., both of whom would probably opt to disown Up the Academy if it were possible.

The plot goes from the introduction of the charmless new students to a boring side-trip so one can see his old girlfriend to a severe head-butting with the hateful Liceman to an unsavory exchange between the Major and an underage girl, culminating with a soccer match / explosion finale that's followed by one of the single most bizarre epilogues you'll ever see. Here's just a glimpse: 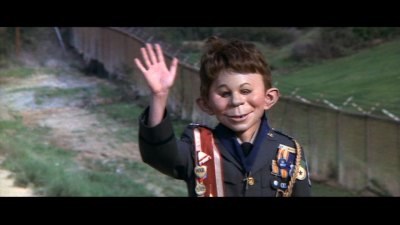 Yikes.
The general humor level of Up the Academy goes like this: doddering old general who farts a lot, a blind barber, a dog in uniform, an outrageously effeminate sergeant (played by Tom Poston, no less), Barbara Bach and her cleavage fondling guns and weapons in phallic fashion, and a huge bunch of broad and nasty swipes at Arabs, gay folks, women, and African Americans ... which of course means that Up the Academy is just as timely today as it was back in 1980. Too bad it's just plain old not funny.

Video: Anamorphic widescreen "letterbox" format, and the picture quality's a lot better than the old HBO tape I finally got my fingers on.

Just the original Up the Academy theatrical trailer, which contains some shots of an Alfred E. Neuman statue that never made it into the final cut of the flick.

Not even the inclusion of Cheap Trick's "Surrender" on the soundtrack can salvage this mess. This is a dusty, dingy old relic that would made a whole lot of folks happier had it never been made. Present company included.

If you're like me and you've long harbored a bizarre sense of curiosity regarding this particular flick, by all means give it a rental. But don't say I didn't warn you.