The Movie
Linda Yellen's first film debuted in a film festival with George Lucas' THX 1138 and Martin Scorscese's Italian American. Since then, she's earned a few degrees, won a few awards and made a few movies, but nothing that has kept her in the same company in which she started. Her latest film, released in 2000, follows a string of TV movies, and has that genre's feel, only with a roster of actors that most directors would like to work with.

The movie starts in the New Jersey home of Katherine (Lynn Redgrave) and Rick (Harry Connick, Jr.) on Halloween, where three couples have gathered for a dinner party. Sandra (Cindy Crawford) and Paul (Jamey Sheridan, "The Stand") are a yuppie couple new to the neighborhood, while Marta (Monica Keena, "Undeclared") and Billy (Dylan Bruno, "Numb3rs") are Katherine's Generation X upstairs tenants. Things are going well until Arnita (Tyne Daly), a psychic hired by Rick, shows up to read their futures.

Arriving at the house, she catches the presence of a pair of ghosts, named Mae (Samantha Mathis, American Psycho) and Edward (William Hurt). Things get out of hand at that point, and Arnita, upset by the guests' treatment, leaves, but warns them, that by New Year's, one of the couples would break up. Obviously, the rest of the year puts all three couples under pressure, and it remains to be seen who will stay together. In the meanwhile, Mae, a flapper girl, and Edward, a prim and proper Southern gentleman, are learning more about each other as they observe the couples. 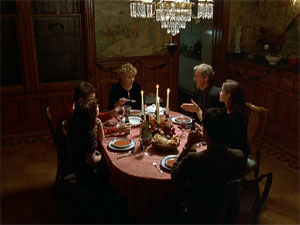 The film's absolute biggest strength is the ability of the actors involved. Redgrave and Daly are very good in their parts, as a woman dealing with age, and a kooky fortune teller respectively. It would be difficult to pick out a member of the cast who doesn't come off well (except perhaps Sheridan, whose part is a bit underwritten as the gruff corporate warrior.) Even Crawford, whose acting career can hardly be considered stellar, acquits herself well in the role of a woman at something of a crossroads.

If one had to pick part of the film that illustrates what the problem is with the overall project, it would have to be when Eric Stoltz enters the picture as a social worker assigned to Marta and Billy's case. The convoluted, sitcom-like turn the plot takes is removed from the tone of the scenes before and after it, resulting in more uneasy progression. If there's one problem that's bigger than the rest here, it's the movie's lack of cohesion. If one story was focused on as the core, say that of Mae and Edward, this could have been a very good movie, but instead, it's more of a well-acted montage.

The DVD
Ardusty Home Entertainment has released The Simian Line on one DVD, packaged in an insert-less standard keepcase. The disc features an animated, full-frame main menu, with options to watch the film, select scenes, adjust the settings and check out trailers. The audio is available in Dolby Digital 2.0 or 5.1, but there are no subtitle options or closed captioning. The scene-selection menus have animated previews and titles for each chapter. 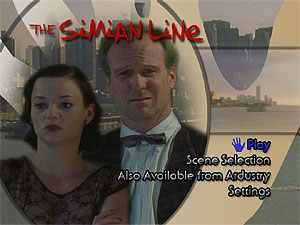 The Quality
For a movie around six years old, the full-frame image is inconsistent, looking sharp as a knife in some scenes, and then soft and a bit blurry in others. The color is solid, and the level of detail is acceptable for the most part, but overall, it's a decent presentation, but nothing great, as there's a considerable amount of grain, dirt and damage throughout the movie, which can get annoying.

The choice of a Dolby Digital 5.1 track doesn't make the soundtrack any better, though it is, for the most part, pretty clear. There's no real dynamic aspect to the mix, as it's almost entirely center-focused, and there can be some jumbling when the film's voiceovers get muddled with the standard dialogue. I listened hard to the surround speakers, but couldn't hear much of anything.

The Extras
The only extras included are a selection of six trailers, including one for The Simian Line. 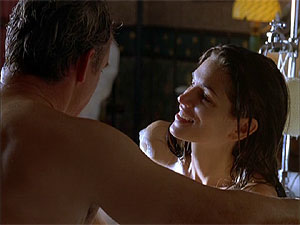 The Bottom Line
Yellen's last film to date is not a bad one, but it doesn't do enough with its talented cast to rise above the trappings of a complicated Movie of the Week. Trying to tell four couples' stories and the way they intertwine doesn't quite work, as the pacing and editing leaves the film off-balanced and a bit too "cute," especially once it reaches its end.

On the plus side, the performances are uniformly good, including quality turns by Redgrave and Crawford. In terms of presentation though, the DVD isn't nearly as good as it should be, and doesn't stand alongside Ardustry's other work, without a single true extra outside of the trailer. The film is worth checking out, if only for the performances, but a rental is all you'd need.