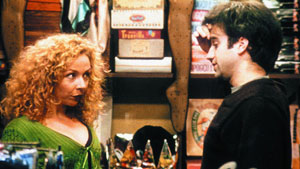 Highly decorated during the Berlin International Film Festival with a Silver Bear Award for Best Male Actor (Daniel Hendler) in 2004 El Abrazo Partido a.k.a Lost Embrace was also selected as Argentina's official Oscar entry. Provided only with a limited theatrical distribution in the United States but making some notable headlines at the Chicago International Film Festival Lost Embrace is finally being granted a DVD release by art-house distrbs New Yorker Video.

Set within the confines of a coquette mall in the Argentinean capital Buenos Aires Lost Embrace follows the daily exploits of the local Jewish community and the abundance of colorful characters gravitating around it. The plot of the film is primarily built around Ariel Makaroff (Daniel Hendler), a thirty-something man who runs a small lingerie shop together with his elderly mother, and the customers he greets each day. Ariel appears visibly bored by the monotony of his job and while occasionally he is cheered up by the hordes of young girls looking for the latest lingerie import he can not stop thinking that his life could have been much more exciting.

Being the knowledgeable owner of a lingerie shop, however, soon proves to be quite a rewarding profession for Ariel. He is often visited by the beautiful Rita (Silvina Bosco), a tech-assistant from the nearby Internet store, who has a soft spot for the newest items in the store's rather large collection of pricey European imports. Of course, Rita would often request to try her selections and being the helpful salesman he was trained to be Ariel would walk her to the fitting room in the back. There, he would kindly "assist" Rita with her selections.

But the steamy sexual interludes between Rita and Ariel soon prove to be rather disappointing. Rita finds it more and more complicated to "browse" the lingerie imports while Ariel becomes gradually obsessed with the idea of replacing his Argentinean citizenship in favor of a Polish one. He believes that having a European passport will finally allow him to escape the boredom of Buenos Aires as well as his mother's daily preaching…which coincidentally has a lot do with Ariel's father who years ago left for Israel in search for a better life. 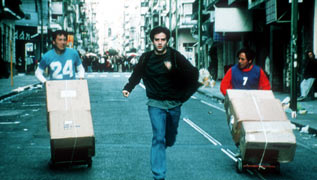 It is almost impossible to deny that Lost Embrace is a film built entirely around a number of clichés you are likely to see in American-made soap operas! Its straightforward narrative leaves little for the viewer to guess and more often than not the story follows a well-established route. Yet, somehow Lost Embrace manages to keep its viewers interested enough mainly due to the charming character which Ariel transforms into during the second part of the film.

What I do not find particularly appealing in Lost Embrace is the inclusion of a number of Yiddish dances (as well as a few singing attempts by Rosita Lardner) which appear totally out of place. I am a bit uncertain what the true motives behind their addition were as they seem to visibly detract from the charm of the film. Did I miss something?

Presented in an aspect ratio of 1.85:1 and enhanced for widescreen TV's Lost Embrace looks quite good. Even though the print for this film appears to have been delivered from a secondary master (most certainly a PAL source) the colors are bright and vivid, contrast rather acceptable, and the print mostly free of dust/specs. With other words, those of you that will be viewing the film on a lower-end TV set will probably be satisfied with the quality while those using high-end set-ups will notice the typical for such transfers "ghosting".

Lost Embrace comes with a Dolby Digital 2.0 track in Spanish, Yiddish, Lithuanian, and Korean and the audio presentation is mostly fine. There were no distracting hiss-ups, pop-ups, or unusual drop-outs yet I could not stop thinking that a more elaborate 5.1 track could have been added. With optional (rather large) English subtitles.

In addition to the theatrical trailer for Lost Embrace New Yorker have provided a short "Making Of" featurette which attempts to shed some light on this South American project. There is hardly anything notable here to write about as the footage in this "Making Of" addresses mostly the filming process while providing a few scattered comments by the cast. This is not an elaborate documentary where the director and cast explore the film in detail. Still, it is commendable that New Yorker provided it for those that might find Lost Embrace a fascinating viewing experience.

I quite liked this film! The story is not groundbreaking by any stretch of the imagination yet there are a few genuinely hilarious moments (Rita's character is superb…so naïve, so funny to watch!). I sense that Lost Embrace could have been so much better yet due to some unknown to me reasons half-way through the film the story begins to wander into a territory which certainly seems a bit atypical. Still, well worth a look! RECOMMENDED