An exceptionally well-made Italian production which I doubt would have seen the light of the day in North America if not for little-known boutique label Synkronized USA La Parola Amore Esiste a.k.a The Word Love Exists will make plenty of foreign film aficionados happy. Co-produced by RAI Italia and Canal + this film was actually made back in 1998 and up to this point has been available only for European distribution. Fortunately what I have in my hands is a handsome, if rather barebones, DVD release which should at least partially make up for the lack of interest from the so-called majors.

The story of La Parola Amore Esiste evolves around Angela (Valeria Bruni Tedeschi) who appears to be struggling with a compulsive disorder illness of some type while desperately trying to find a man she can love. Angela has plenty of material possessions in her life but she has never been able to build a relationship where another human being would respond to her desire to be loved. So, when she encounters Marco (Fabrizio Bentivoglio), a divorced cello teacher, she decides to enlist in his private studio and give fate another chance.

When the time finally comes for her first lesson with Marco however Angela is unable to gather enough courage and ring the bell at his door. Instead, on a piece of used paper she writes a small poem and tucks it into Marco's mailbox. Marco on the other hand concludes that Angela has simply found another hobby and she is no longer interested in his cello lessons. Unsuspecting that Angela has fallen in love with him day after day Marco will find in his mailbox tiny little love notes that will eventually force him to respond. Only instead of responding to the author of the lovely notes Marco will approach a significantly younger student who has been visiting his apartment for her weekly cello lessons. 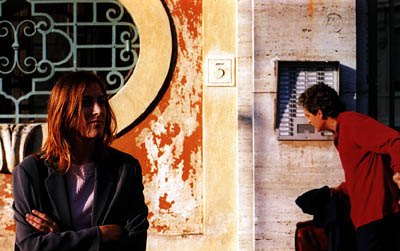 Long after I finished watching La Parola Amore Esiste I could not stop thinking about how people often fail to communicate their feelings to each other. And then they end up suffering! So much, that their lives transform into never-ending nightmares filled with self-humiliation.

La Parola Amore Esiste is a quiet film that most certainly takes its time before introducing all of the characters contributing to this elegant story. Director Mimmo Calopresti has invited some rather well familiar faces in his film and together with the two leads Valeria Bruni Tedeschi and Fabrizio Bentivoglio La Parola Amore Esiste offers notable cameo performances by Gerard Depardieu, Massimo Bonetti, and Victor Cavallo. The quality of the acting, as you probably could guess at this point, is exceptionally high and I could hardly think of a more suitable cast that could have been assembled. Indeed, if not for a few melodramatic sequences that appeared a bit too strong even for my taste, I believe that La Parola Amore Esiste could be considered one of the better genre pictures dealing with the subject of female longing.

Presented in an aspect ratio of 1.85:1 and enhanced for widescreen TV's La Parola Amore Esiste looks good. I had some suspicions that the print might be manipulated however I am happy to report that the DVD herein reviewed is properly flagged and the anamorphic image is indeed very strong. Contrast is largely very well handled though I think that there is a tiny bit of boosting which is noticeable during daylight scenes. Colors are natural and lush and I did not notice anything that might detract from your viewing experience. Last but not least edge enhancement does not appear to be a major issue with this release although a few times (especially during the second part of the film) I was able to spot it. All things considered I am very happy with this release and am eagerly anticipating Synkronized's next batch of titles.

As this film was co-produced by RAI Italia and Canal + the DVD comes with an option of Italian and French 2.0 tracks (Italian being the original one). The quality of the audio presentation is exceptionally good and indeed the beautiful soundtrack filled with excellent classical music is handled quite nicely. There were no distracting pop-ups, hissing, or cracks. With optional English subtitles.

There are no extras to be found on this DVD release.

What a beautiful film!! Quiet yet so powerful La Parola Amore Esiste will be remembered for its spectacular story and great acting. I am quite excited to see Florida-based Synkronized USA release this DVD and hope that they will go after similar productions in the future. I am aware that they are preparing a release of Yvan Attal's Palm d'Or nominee Les Patriotes so my advise is: Please make sure to properly convert your prints and deliver the needed quality these films deserve (avoid PAL-NTSC ports at all costs). RECOMMENDED!