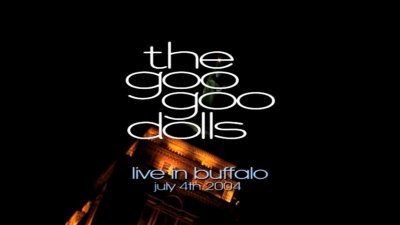 This review covers the CD+DVD release of The Goo Goo Dolls: Live In Buffalo July 4th 2004, and while this review comes nearly one and a half years after its release (November 23, 2004), better late than never? Well, truth be told... I recently purchased this CD+DVD set and I have enjoyed it so much that I thought I would share my opinion about it.

However before we begin, let's talk a little bit about my experience with The Goo Goo Dolls. When their popular hits like "Slide", "Name", and "Iris" were ranking on the top 40 radio charts I listened to The Goo Goo Dolls, but over the years their music has disappeared from my collection. It wasn't until a few months ago when I was scrounging around the top 40 charts from the 90s that I found the music of The Goo Goo Dolls again. Since then, I've had a hard time going through a day without listening to their hits like "Big Machine", "Slide", "Iris", and the many others. Needless to say, I was looking forward to picking up a copy of the Live in Buffalo CD+DVD set. 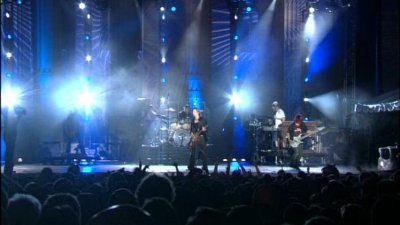 And since purchasing the set, I haven't been able to put it down. The CD+DVD set comes with, surprise surprise, both an audio CD and a DVD video. The audio CD has an additional track not found on the DVD, which is the studio version of "Give A Little Bit", and the DVD comes with a couple of extras you won't find on the audio CD. Together with an M.S.R.P. of $24.98, you can't go wrong. This is a must own for fans and casual listeners of The Goo Goo Dolls.

What you will find from listening to the audio CD or watching the DVD video is that The Goo Goo Dolls sound just as impressive live as they do on their albums. The collection of songs included in their set features all of their best songs and some more. 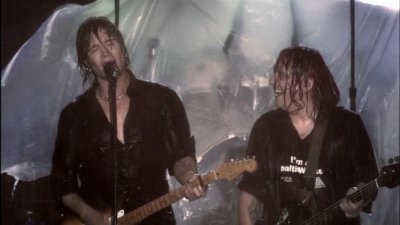 Something remarkable about this particular performance is that during "January Friend" it started raining and they kept playing. By the end of the last song both Johnny Rzeznik and Robby Takac were soaking wet, but they still had the biggest grins on their faces.

While watching the DVD video you'll come to realize what an impressive feat this was, and even on the part of the audience who was also soaking wet. On the downside, the sound of the pouring rain makes the audio track sound slightly distorted, and there are several moments you will really notice it. Regardless, The Goo Goo Dolls: Live In Buffalo July 4th 2004 is still a lot of fun to watch and listen to. The experience is uplifting, energetic, and will leave you wishing you were at the show. 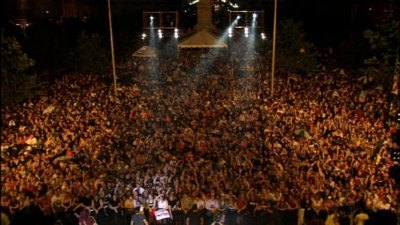 Here's the track list, and again, the studio version of "Give A Little Bit" is only found on the audio CD.

1. Give A Little Bit (Studio Version)

The video on the DVD is presented in anamorphic widescreen color. The video was shot in digital and offers a clean and crisp picture. There are moments when it is raining that the picture looks like it is suffering from various distortions, but it is just the rain. The lighting was also done nicely and details the band well.

The sound in this concert DVD is provided in two flavors, 5.1 Dolby digital surround and 2.0 Dolby digital stereo. The 5.1 track offers a better listening experience (if you have the setup). It is dynamic and uses the surround sound capabilities quite well. In general the audio sounds great with vocals and instrumentals coming off rich and vibrant. However as mentioned in the body of the review, once it starts raining you can here the rain at times which leaves the audio track sounding slightly distorted. But in no way does it ruin the experience.

In the past several months I have found myself addicted to The Goo Goo Dolls. Because of this I was really excited to pick up the Live In Buffalo CD+DVD set and I was pleased to find it meet my expectation on every level. The band's performance was topnotch, as well as the audio/video recording of the live concert look and sound great (with the exception of the periodic sound of the rain during tracks 13 and on). Whether you listen to the audio CD or watch the DVD video of this concert, you will be left loving The Goo Goo Dolls.