I think it is fare to say that in the heart of Krzysztof Kieslowski's La Double Vie de Veronique lays controversy. So much of it that the film is often viewed by knowledgeable cinephilles as a story that simply does not necessitate a definitive resolution! Those who would attempt to link all of the missing pieces in Kieslowski's puzzle will most likely walk away tormented by the fact that nothing is as crystal clear as they hoped it will be.

La Double Vie de Veronique follows the lives of two different women: Veronika and Veronique. They were born on the same day, they share the same talent, and they both suffer from the same heart complication. They know nothing about each other yet occasionally they would feel a "certain presence". Veronika lives in Krakow, Poland, Veronique lives in Paris, France.

Kieslowski walks us into his film with a short introduction where we see Veronika attending a singing audition. Shortly after, it is announced that she has been selected as the main soloist for a prestigious recital. Veronika is visibly flattered that the jury has granted her the leading part. On the night of her performance Veronika's heart collapses and she dies on the stage.

Back in Paris Veronique attends a show where a masterful puppeteer will perform a strange piece. A beautiful doll, clad in a tiny white dress, will die on the stage. Directed by the crafty fingers of the master puppeteer a heavenly angel will take the tiny doll away. Minutes before the play ends the little doll will stare at Veronique with its cold, unflinching eyes. Then the curtain will fall, the master puppeteer will put his lifeless dolls away, and everyone will forget about the show. A few days later a piece of thread will miraculously appear at Veronique's apartment in Paris. 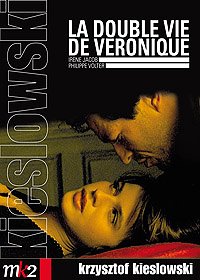 During the years I have read hundreds and hundreds of articles attempting to "explain" the subtle symbolism behind Kieslowski's Le Double Vie de Veronique. Some were an interesting read, some were rather pretentious, and some were as laughable as the theories they offered. I am certainly not willing to decipher for you a film that is better viewed with a healthy dose of "blissful ignorance". Why? I am convinced that the less you know about Le Double Vie de Veronique the more appreciative you will be when the final credits roll. Instead, I would like to tell you a short story which reflects my first viewing of Kieslowski's film.

I saw Le Double Vie de Veronique in Eastern Europe. The movie theater I attended was old and with a Soviet-style heating system that would kick in every thirty minutes then shut itself off making a loud noise as if an old train was departing. The screen was unusually big and often when a classic film was shown the staff had to adjust the curtains accordingly. On the day when Le Double Vie de Veronique opened the electricity had gone out twice and I remember being extremely nervous.

So, the lights went out and quickly I was transported to Krakow, Poland. Strange…it all looked so familiar- beat up streets, old Soviet trams, people wrapped up in their worn out coats. In this depressing city still living in a state of post-war fear there was Veronika with her dreamy eyes trying to sing her part. She looked joyful, excited, almost as if she was living in a different world. Then at the night of her performance she collapsed and Kieslowski relocated his story to Paris. Immediately it all felt foreign to me: the streets were cleaner, the shops were more colorful, the cafes were more elegant. I must have shifted uncomfortably in my chair. Then, I saw a familiar face, the same eyes, the same hair, even the same coat: it was Veronique. Her eyes were still dreamy but she looked different. There was something in her expression that even today I have a difficult time understanding. Veronique looked at ease with the place where she was living.

The rest of the film disappeared in front of my eyes as I hardly remembered anything from the "mystery" everyone would later on discuss. All that I would recall was the haunting soundtrack by Zbigniew Preisner which to this day I still own on a portable audio cassette. How trivial…not only I did not "understand" the film but I also managed to fall victim of my own expectations hoping to see a "modern classic". That night I remember going home as angry as I have ever been.

So, why am I telling you this story? Because for years I wanted to understand what I missed that night! Just like everyone else I wanted to link the missing dots between Veronika (Weronika as some would spell her name) and Veronique. I wanted to be part of all those intellectual conversations attempting to deconstruct the "hidden messages" behind Kieslowski's film. Only…I could not see that the answer, or shall I say my answer, was right there, in front of me, begging to be seen. Yet, I missed it!

I "saw" it years later! If I had to guess I think that it was somewhere around 1994 when I saw the last installment of Keslowski's Trois Couleurs. I kept going back to that night in the old movie theater until I finally figured it out. It was the anger that tormented my soul. I "saw" how incredibly different the two worlds Kieslowski had filmed were. One was full of life (it was Veronique who Kieslowski picked to live) the other was gloomy, weak, and doomed (it was Veronika who Kieslowski picked to die). The old master knew what he was filming! No wonder people were unable to decipher his "mystery"…there was none! Instead, La Double Vie de Veronique was a revelation.

Those who saw La Double Vie de Veronique in the West would always say that the film was a poetic tale of loss, a meditative exploration of the subconscious - beautiful, haunting, elusive. I never understood why. The film is lyrical but cruel. What I think that Kieslowski filmed was a world that was soon going to die. He had lived on both sides of the iron curtain and had seen the gloomy, ugly face of Eastern Europe. In La Double Vie de Veronique I think that Kieslowski predicted its political demise.

Those who saw the film in the East were angered. I certainly was! What I saw was a painful reality! Instead of taking me away from the world that I had come to successfully disregard La Double Vie de Veronique rubbed it in my face. It did not matter how beautiful the colors, the music, Veronika and Veronique were. It was obvious to me that what Kieslowski filmed was a piece of history. Only he had "seen" it long before everyone else did.

La Double Vie de Veronique comes in a most elegant double case which slips in a slightly larger case (digi-pack style). The set comes with a commemorative piece of the film negative which has been provided by the French distributor MK2 and is limited to 20 000 copies. The DVD herein reviewed carries the following number: 009796. The piece of film negative is framed in an elegant black holder.

Presented in its original aspect ratio of 1.66:1 and enhanced for widescreen TV's La Double Vie de Veronique looks rock solid. Pure film-like presentation revealing a stunning degree of contrast, excellent print devoid of any damage, and one of the best progressive transfers I have seen in a very, very long time transform this MK2-produced DVD into an absolute must-have for serious cinephilles. Quite frankly this DVD release is perfect!

With this said I would like to address a few concerns regarding the prevalent green-tint Marin Karmitz and his team working on the restoration of La Double Vie de Veronique have approved. Some have expressed an opinion that this is not the true color scheme of the film as there has been some obvious color manipulation. I have a slightly different opinion on the issue. I tend to believe that for the first time the film has been graded properly from the original telecine and the colors intended by Kieslowski have been reproduced without any "natural" manipulation. Certainly a definitive comment by the cinematographer of La Double Vie de Veronique Slawomir Idziak would bring much needed clarity to the "issue" but knowing that MK2 have an official distributor in Poland that is currently relying on the same print (hence if there was something wrong with the color gradation an official statement from Idziak would have surfaced) and no claims have been raised I am perfectly satisfied with how the film has been restored. PAL encoded, Region 2.

Offered with its original Dolby Digital 2.0 track and a more elaborate 5.0 mix the audio presentation is flawless! I opted for the 2.0 track as that is how I first saw the film and my comment is very simple: perfect! With optional French and English white subtitles.

Before I state all of the extra materials for you allow me to point out that French distributor MK2 have provided the option of having ALL extras with either French or English subtitles. So, for those who do not speak either Polish or French the English subtitles will be a most welcome addition. In fact, even the entire main menu system offers two separate interfaces: one in French and one in English.

Conversation with Kieslowski (52 min.): An in-depth exploration of the filming process of La Double Vie de Veronique where Kieslowski reflects on the manner in which the film was shot. There is plenty of archive footage that shows the director giving instructions in Polish that are being translated in French and the cast listening to his remarks. What is more important there are plenty of comments that Kieslowski makes regarding his previous films, the Polish cinema in general, the censors in Poland, and how the film came to fruition.

Interview with Irene Jacob (13 min.): This interview as it seems was specifically recorded for the release of this double DVD set. It was shot in 2005 and in it we have the opportunity to listen to Irene Jacob and her recollections about the role of Veronique, her experience with Kieslowski, and how the film was perceived by the public.

Kieslowski: Polish Filmmaker-documentary (31 min.): This is absolutely an outstanding piece of extra. Delivered by the MK2 team this 30min. documentary follows the history of Polish cinema from the occupation of Poland by the USSR all the way to present days. The documentary successfully points some of the greatest Polish film directors, their works, the role of the censorship, the notorious riots that led to the formation of the largest workers' union in Eastern Europe, the role of the Lodz Film School in Polish cinema, the genesis of Kieslowski from his documentaries to his final film which was completed in 1994. Indeed, if you ever wanted to know more about Poland, its politics, and the history of Polish cinema this feature comes very highly recommended.

One of the most anticipated releases of 2006 year is finally in my hands and I could not be any happier. Classy French distributor MK2 have provided what everyone was hoping for: an immaculate package for this superb film. Everything in this double DVD set screams elegance: from the piece of commemorative negative, to the simple yet entirely English-friendly menu system/extras, to the remarkable film presentation, to the classy cover design. Quite frankly I can NOT think of a single reason why you should not have this marvelous set in your collections: DVDTALK Collector Series!!!