Online rental provider Netflix seems to have adopted a new distribution policy which in effect grants access to certain international and independent films that are otherwise unavailable in North America. These are films that have won a substantial amount of recognition from critics and audiences around the world and have appeared at some of the most prestigious film festivals throughout Europe and Asia. Netflix's latest acquisition is the Danish production Elsker Dig For Evigt a.k.a Open Hearts (2002).

On a gloomy day in Copenhagen Cecilie (Sonja Richter) and her fiancée Joachim (Nikolaj Lie Kaas) are quietly discussing their future. Cecilie has bough Joachim a car and he is visibly excited. They hug, she kisses him gently, he cracks up a joke. Then Joachim opens up the tiny door of his car and exits. In an instant his body is crushed by an incoming vehicle.

In the hospital where Joachim is placed a doctor (Mads Mikkelsen) attempts to console Cecilie. But there is no good news he can provide her with! Joachim's spinal chord is severely damaged and he will remain paralyzed for the rest of his life. Cecilie is devastated yet she vows to stay with Joachim.

Angered by his inability to perform like a normal human being Joachim asks Cecilie to find herself another man. Cecilie bursts in tears... stunned and deeply offended. The doctor supervising Joachim attempts to console her and when he does Cecilie collapses in his hands. Soon the two will establish a relationship that no one will approve.

Structured according to the principles of the now notorious Dogme movement Open Hearts also plays with many of the societal clichés one is likely to encounter during a tragedy as unfortunate as the one told in this film. Besides the obvious questions which Susanne Bier asks there are also plenty of grey areas in Open Hearts that most certainly will make viewers shift uncomfortably in their seats. The sense of guilt which by the end of the film I wanted to place on the shoulders of someone else, not the person responsible for this tragedy, made me ponder how much more suffering there is in a case that might otherwise look transparent. 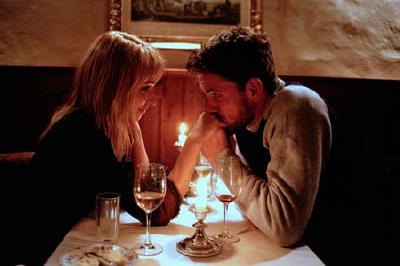 Open Hearts offers an uncommonly edgy look where anything that could have detracted from the gripping power of this film has been left on the cutting floor. Flashy camera moves, studio lighting and impressive audio options have been sacrificed in a manner that reflects most if not all of the principles described in Dogme 95. The result is a film that some will embrace as the ultimate in pure storytelling while other will disregard as pretentious trickery meant to undeservedly enchant art-house snobs. Count me in the group of those who consider Open Hearts one of the most intelligently made films to ever come out from the frozen lands of Denmark.

How Does the DVD Looks?

Presented in its original aspect ratio of 1.33:1 Open Hearts carries all of the significant for a Dogme picture elements: grainy look, rough color scheme, delicate lighting. Therefore it is extremely difficult to apply the same standards one is likely to utilize when reviewing a regular release. The print herein reviewed looks exactly the same as the one used for my Danish DVD. In fact, I am fairly certain that Netflix have used a secondary source for the mastering of this DVD, a PAL source at that, as I could notice a tiny degree of "ghosting". The good thing with this R1 release is that if you are unfamiliar with the Dogme movement and the style it supports it will be almost impossible for you to determine that this print has been mastered from a PAL source. There is plenty of blurs in this film to begin with so it becomes irrelevant for one to discuss the nature of the master used for this release. Still, I could tell that the original film telecine was nowhere around this Netflix release (and given the distrib and the manner this film was brought to the US I would not have expected to see such). To sum it all up, this is a very acceptable release of the film that should serve well those who wish to see Open Hearts. Those who wish to own it…there are other options.

Presented with its original Danish Dolby 1.0 track Open Hearts sounds terrific! The audio is clean and of the same quality as the one used on previous releases. I could not hear anything that is worth discussing in this review. Simply perfect!! Unfortunately however the English subtitles appear "imposed" (in fact on a rather large black strip overlapping the film print).

Unfortunately, there are no extras to be found on this DVD release.

Two year ago I made my opinion about Susanne Bier and her touching film Open Hearts well known. This is hands down one of the best modern Danish films and the fact that just now, thanks to Netflix of course, the film reaches US shores is criminal. I urge you to make Open Hearts your top viewing priority and more importantly disregard all the negativism film pundits have showered the Dogme movement with. See the film and judge for yourself. Intelligent cinema does not get any better than this!!! RECOMMENDED.