Well, here it is! I finally have in my hands the double set of Qui êtes-vous, Polly Maggoo? a.k.a Who are you Polly Maggoo? (1966) courtesy of French distributor Arte Video and their rich catalog of provocative classic and contemporary films. Digitally restored, looking even better than Mister Freedom, tucked neatly in a lavish box with an entire second disc containing the documentary In and Out of Fashion (1998) this is easily one of the most impressive releases I have seen thus far. Indeed, quite a way to launch 2005!! 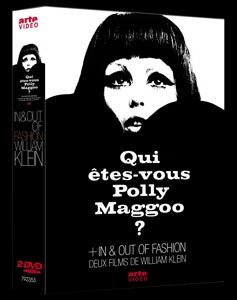 A critical look at the fashion world with all of its pretentiousness, the designers struggling to accomplish perfection, and the models living their dreams Who Are You Polly Maggoo? is a film unlike any other you have ever seen. Written and directed by American expatriate William Klein whose films have reached a near cult status in France Who Are You Polly Maggoo? is a visual feast of weird costumes, eccentric behavior, and people obsessed with style at a time when commercial fashion was growing roots in the Gallic capital.

Who Are You Polly Maggoo? opens with a fashion show where a group of models are forced to wear abstract metal outfits (some falling victims to the designer's vision thus suffering major cuts on their bodies) for no other but the notorious during the 60s editor of Vogue Magazine Miss Maxwell. In a cave-like venue the fashion elite has gathered to witness one of the most provocative collections in Paris. Nude, bruised, but happy to be seen fashion models will attempt to impress Miss Maxwell.

Next we see Polly Maggoo, a rising star, who has arrived in Paris to shoot her new TV show. A camera man will attempt to "lock" the perfect scene, nervous paparazzi will follow Polly Maggoo, and an eccentric director will shoot on the roof of a famous Paris building while a future masterpiece is being created! Back on the streets a crowd of passionate Parisians will argue why French politicians are so disturbingly inept while an unknown prince charming will ride his horse through the French capital.

I am certain that at this point you are probably asking yourself "wait a second, what am I reading", "is there even a story here"? Yes, not only there is a story but a great one at that as well. Who Are You Polly Maggoo? may seem a bit chaotic at first but the more you delve into it the more fascinating it gets. Fashion, politics, culture, the media, William Klein has created the ultimate satiric picture where everything French is being dissected with a merciless precision.

What truly impresses in Who Are You Polly Maggoo?, however, is the enormously talented cast. Old pal Fernando Arabal is here (Viva La Muerte), Jean Rochefort (Le Mari de Coifeusse), Samy Frey (De Sable et de Sang), even Philippe Noiret (Cinema Paradiso). Of course the biggest surprise is the music score provided by French legend Michel Legrand who has worked on such classic films as Jean-Luc Godard's La Chnoise (1970), Robert Fuest's Wuthering Heights (1970), The Other Side of Midnight (1977), and of course the classic Les Parapluies de Cherbourg (1964). Oddly enough the leading role of Polly Maggoo was granted to no other but Dorothy McGowan, a wild Beatles groupie, whose only appearance in front of the camera was indeed William Klein's film.

Still, with its mainstream cast of actors Who Are You Polly Maggoo? is one of the most unconventional pictures that was created during the 60s. The sheer power of Klein's camera combined with the extremely witty premise behind this film is nothing short of amazing. If one were to update the clothes, the settings, and hairstyles Who Are You Polly Maggoo? could easily be seen as a truthful portrait of a fashion world which more often than not lives in its own happy bubble!

I consider Arte Video one of the top 5 French distribs (alongside Rene Chateau Video, MK2, Carlotta, and Wild Side) and this marvelous boxset most certainly shows why!! Presented in its original aspect ratio of 1.66:1 and enhanced for widescreen TV's Who Are You Polly Maggoo? looks stunning. I highly doubt that William Klein expected such impressive results. With deep blacks (while created with a limited budget this film offers some great panoramic vistas), excellent degree of contrast, and a healthy dose of grain, this is one very impressive film presentation. Yes, in the opening I did notice one or two dust specs but this is nothing more than what you would encounter in a solid Criterion release.

The biggest surprise with this release, however, is the manner in which the DVD was mastered. As it was the case with William Klein's Mister Freedom Arte Video have encoded Who Are You Polly Maggoo? in NTSC, R0 and supplied it with an entirely-English friendly interface thus providing North American film enthusiasts with the perfect solution: seeing the film with their "regular" players and not having to worry about navigating through French-written menus. No doubt this is a great and well-thought of move by Arte Video!

Presented with its original Dolby Digital Mono track in French (with optional English subtitles) Who Are You Polly Maggoo? sounds great. The dialog is clear and easy to follow and there are no audio dropouts that I noticed. I want to specifically point out that some of the background noise present during the opening scenes is indeed natural. This is not "hissing" but something that Klein opted for (especially during the chaotic interview scene).

As the second disc in this boxset with the documentary feature In and Out of Fashion is what I consider to be the "extra" here what you would get on this disc is a lengthy journey through Arte Video/ARGO's catalog. This is not your typical "trailer-gallery" but rather a compilation of filmed photos highlighting some of the best from Arte and their partners. In addition, there are your standard credits pointing out the crew responsible for this disc.

Once again, as it was the case with the two other William Klein films, In and Out of Fashion is offered with an option of setting your menu system in either French or English. The DVD is also encoded in NTSC, R0.

Graced by the soundtrack of French icon Serge Gainsbourg In and Out of Fashion is a self-narrated, semi-documentary, in which William Klein walks us through the history of fashion and his personal interest in film. Referring to the formations of Channel, Dior, the rise of Jean-Paul Gautier, and Yves Saint-Laurent among others In and Out of Fashion is a collage of excerpts from Klein's earlier films: Mode in France (1984), Contacts (1983), The French (1982), Le Couple Temoin (1977), Mr. Freedom (1969), Loin du Vietnam (1967), etc.

I found the segment from Mode in France, a film which I am yet to see, absolutely fascinating. Presented in a fast-forward manner, quickly skipping through years of war and political havoc, this segment shows three women as they dress, undress, and then dress again in different outfits indicating the cultural revolutions in France from 1920s, 1940s, the 1960s, to present days. From the abolishment of the corset, to the rise of Channel and their new designer lines, to the stockings, all the way to the minijupe (miniskirt), this was a fascinating extract of Mode in France. I shall be on the lookout for this film.

Last but not least the voice-over narration by William Klein, which is in effect a commentary, is simply captivating. He goes in great detail explaining the history behind what is shown on the screen, how his films came to exist, the cultural pretext behind them, and last but not least his fascination with mode. Great!!

Presented in its original aspect ratio of 1.33:1 In and Out of Fashion is basically a collection of footage from Klein's early works complimented by extra archive-material meant to explain the director's vision through the years. As such, the quality of what is provided here varies, not so in terms of quality but rather in terms of having a black and white footage followed up by a color archive "extra". With this said In and Out of Fashion looks great and I could not be any happier with the presentation.

Presented with its original Dolby Digital English language track (the French portions of the film are shown with English, optional, subtitles) the audio is crisp, clear, and Klein's narration is very easy to follow. The music score is great and well-reproduced thus providing the film with the needed elegance especially during the vogue presentations. With optional French Subtitles.

As this is practically the "extra supplement" to Who Are You Polly Maggoo? once again what you would find on this disc is the extensive promo by Arte Video and their partners.

This spectacular 2DVD set of William Klein's Who Are You Polly Maggoo? and his semi-documentary In and Out of Fashion is like a time capsule containing the spirit of French fashion and art from the 60s. The particularly witty manner in which Who Are You Polly Maggoo? is filmed sheds light on a country and its manic obsession with style while exposing a part of the business that is as hilarious as it is in my opinion exploitative. Shot in black and white immediately after the peak of the French Nouvelle Vague of the 1950-1960 Who Are You Polly Maggoo? satirizes just about everything French culture was glorifying at the time.