The Mediterranean Sea...On a luxurious yacht with plenty of snobbish customers Gennarino Carunchio (Giancarlo Giannini) is forced to endure the constant abuse of Raffaella Lanzetti (Mariangela Malato). A passionate communist who can hardly tolerate the bourgeois attitude of Mrs. Lanzetti and her friends Gennarino would often sit quietly in his kitchen enjoying a cup of espresso. Secretly he would curse on Mrs. Lanzetti wishing that one day she would have to endure the same degrading abuse those around her are graced with. And when an improvised late-afternoon trip goes awry the impossible happens - Gennarino Carunchio and Raffaella Lanzetti find themselves stranded on a deserted island in the middle of the Mediterranean Sea. Mrs. Lanzeti will soon receive a lesson she would never forget.

In 2002 the famous Ritchie family, Guy and Madonna, attempted to resurrect a cult UK/Italian production which many are probably unfamiliar with. Twisting and sugarcoating the plot of this most provocative piece of cinema the Ritchie family assembled a dull, pretentious, and in my opinion rather degrading head-scratcher which unfortunately was not Madonna's last acting effort. Good thing this insulting "remake" quickly disappeared from the face of the earth.

The original Italian production, Travolti da un insolito destino nell' azzurro mare d'agosto a.k.a Swept Away... by an Unusual Destiny in the Blue Sea of August, appeared in 1974 creating quite the turmoil amongst Italian critics because of its rather explicit dialog. The passionate interludes between the skinny southerner Gennarino and the wealthy Mrs. Lanzetti proved too spicy for some and as a result Swept Away was granted a softer treatment where the notorious English-dubbed version negated what made this film famous in the first place: the jargon.

Swept Away also established Lina Wertmuller as one of Italy's most beloved comedy directors. Mixing humor with sex and politics, a trademark for this talented director, proved a winning formula which Wertmuller would often resort to in her future projects. It was her ability to satirize the Italian society and its formation however that truly made her films worth watching. From sex and politics to century-old cultural clichés Lina Wertmuller managed to poke fun of just about everything the passionate Azzurri cherished.

In Swept Away there is plenty of sex, spicy jokes, and hot Italian temperaments. Recreating the typical for Italy cultural division between the wealthy North (Mrs. Lanzetti) and the rural South (Gennarino) Lina Wertmuller tells a story where there is very little that would surprise the viewers. Yet, this is quite an unusual film! The stereotypes which Swept Away is built upon while exacerbated are perfectly believable. They are also closely related to Wertmuller's desire to deconstruct a society so polarized by meaningless politics that by the time the end credits roll the viewer is unsure if Swept Away was meant as a romantic story with an extra touch of spice or a much more sobering look at the Italian society and its perception about class.

Regardless of how you choose to view Swept Away there is a good chance that you would enjoy tremendously what you see. The characters are extremely well done and this newly restored version, preserving the original Italian dialog, revives the somewhat forgotten charm of this beautiful film. So, sit back, relax, and take a journey to an exotic Mediterranean island where two people will slowly rediscover what makes them being human. 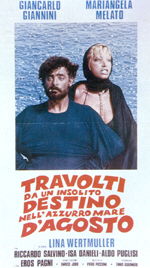 First of all let's make it clear: this is exactly the same version of Swept Away as the one already released in the Lina Wertmuller Collection boxset. Logically, all of the initially confirmed specs appear identical. Presented in its original aspect ratio of 1.85:1 and enhanced for widescreen TV's the print is rather good but not even close to being solid or even exceptional. Colors appear largely well-reproduced, contrast is fair, and edge enhancement si somewhat tolerable. In addition, there are few specs here and there but nothing distracting that would otherwise detract from the good status of this print mentioned above. If anything bothered me with this presentation it was the fact that occasionally I would spot a tiny bit of dirt old films are often plagued with. All in all, one could probably argue that this film could have looked much better but it is what it is and at least we get a passable effort by Koch Lorber. Case closed!

What a relief! Finally after all the dreaded releases of Swept Away offering the sanitized English dub the film is presented with its original Italian mono track, a Dolby 2.0 track, and a more elaborate 5.1 track. For what its worth I opted for the mono track and I dare claim that it is the best one provided with this disc. If anything the re-mastered 5.1 track sounds dull, hollow, and quite out of place: simply not a good effort in my opinion. I could not come to like the fact that there was no depth whatsoever with the 5.1 mix yet the film offers a gorgeous music score. Thankfully the mono option is cleaned up and in great shape. With optional yellow English subtitles.

Aside from a few trailers for other upcoming Koch Lorber releases there is nothing else to be found on this DVD.

Together with Pietro Germi and his all-Italiana comedies Lina Wertmuller is amongst some of my favorite Azzurri directors. The DVD of Swept Away is a major improvement over the now out-of-print Koch release but still has a few issues here and there. Thankfully we finally have the original Italian language in tact which as far as I am concerned is a good enough reason to give this release the RECOMMENDED mark.