In the town where he lives Pasqualino Frafuso (Giancarlo Giannini) is loved by everyone: women will often spare an inviting smile while men would listen to his words nodding their heads in agreement. But after an unfortunate event lands him in prison Pasqualino begins to reevaluate everything about life he has been taking for granted.

After he is released from prison Pasqualino is immediately shipped to the front where he must fight the Nazis. There, he is captured and sent to a labor camp populated with enemies of the new regime. In order to survive Pasqualino decides to seduce the commandant of the camp, an overweight and plump German Frau, whose presence is feared by everyone. Recalling his mother's advise that "every woman can be conquered through her heart" Pasqualino will attempt the impossible. 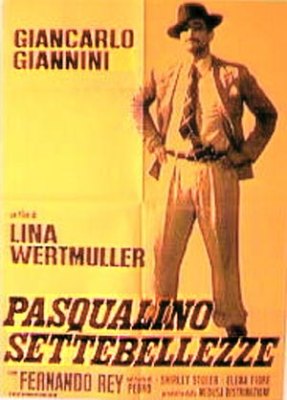 Nominated for four Academy Awards, including Best Director, Best Foreign Film, and Best Actor (Giancarlo Giannini) Pasqualino Settebellezze a.k.a Seven Beauties (1975) is arguably Lina Wertmuller's finest cinematic achievement. Part-comedy, part-drama, this highly emotional film transports its viewers to a period from the history of Italy filled with controversy, pain, and plenty of tragic events. Yet, in an unprecedented manner Lina Wertmuller has managed to create a film that is as thought-provoking as it is outrageously funny.

Avoiding the typical for Holocaust-themed films formula where black is black and white is without a touch of grey Seven Beauties paints a unique world where the main protagonist is as sinful as Judas. Pasqualino murders, rapes, and despoils without feeling any remorse. Yet, watching him attempting to seduce the camp's commandant is as funny of a scene as you will ever see. There is something grotesque in observing a man stripped of his macho-shell crawling in the feet of an abusive woman.

Seven Beauties is also an enormously bold film. I can not recall seeing another picture where so much ugliness has been teamed with so much humor. It all feels so wicked yet uncharacteristically attractive. Juggling between being a comedy-Italiana and a serious war drama Seven Beauties remains fresh even though teh story often resorts to overused, often clichéd, themes. Take for example the moment when Pasqualino decides to approach the commandant. Seconds before the camera would focus on Pasqualino's face we see the cold body of a man hanging from a thick piece of rope. A chilling scene! Immediately the camera zooms around and we see Pasqualino using his own saliva, his hands nervously shaking, attempting to fix a dusty bonnet. He then proceeds with an inviting kiss meant to strike the commandant's heart. What a spectacular moment!!

It is the ability to truthfully recreate the most basic of human emotions that separates good film directors from great film directors. Lina Wertmuller is arguably one of the best when it comes to creating characters that scream authenticity. Despite of the intentional kitsch her films are often accompanied with her stories are always an honest reflection of the world she lived in. In Seven Beauties, in a manner reminiscent to the glorified by the ancient Greeks tragoidia, tragedy is being closely intertwined with comedy. Touching, passionate, and utterly original Seven Beauties is one of the finest European classics from one of Italy's greatest directors.

In 1977 Seven Beauties was nominated for Best Picture at the Golden Globe Awards; the film was also nominated for Outstanding Directorial Achievement in Motion Pictures by the Directors Guild of America; and received Oscar nominations for Best Picture, Best Director (Lina Wertmuller), Best Actor in a Leading Role, and Best Writing/Screenplay written directly for the screen.

Once again let's make sure that everyone is aware of the fact that this specific presentation is exactly the same one as Seven Beauties' version that could be found in Lina Wertmuller's collection. Logically, all previously confirmed technical specs are identical. With this said, even though Seven Beauties offers the film in its original aspect ratio of 1.66:1 the print herein reviewed is not anamorphically enhanced. I am disappointed but not utterly upset!! This new "digitally-restored" print is indeed a substantial improvement over any other previously released version. Yet, I can not figure out why Koch Lorber have chosen not to enhance it for widescreen TV's. Colors appear most definitely in good condition, contrast is largely well-handled, and if not for a few very tiny dust specs here and there this would have been a rather impressive release. Furthermore, the inside vistas from the concentration camp look quite well and I generally liked how the print has been restored. Nevertheless, I am most certainly saddened that this is not the anamorphic print of Seven Beauties everyone was looking forward to.

Presented with a total of six different audio options: an original Italian mono, Dolby 2.0, and Dolby Digital 5.1 tracks and English dubs in mono, Dolby 2.0, and Dolby Digital 5.1 Seven Beauties is best viewed with its original mono audio track. I find this quite amusing as (similar to Swept Away) due to some unknown to me reason the Italian 5.1 track lacks depth and you will most certainly be able to notice it. With this said the mono track is free of any disturbing cracks, hissing, or more substantial audio dropouts.

Seven Beauties is offered on two discs as the main feature appears on disc 1 and all of the extras appear on disc 2. In addition to Lina Wertmuller's filmography on disc 2 you will find an enormously big interview with the Italian director (78 min.) divided into 10 chapters which covers just about anything you would like to know about her life, work, and career as a director. Touching upon her childhood years in Italy, her passion for film, her short-lived affair with American cinema, and her involvement with Italian TV programming Lina Wertmuller provides an intimate look at her life and film career that would enchant her most-dedicated fans. This interview alone is a good enough reason to recommend the disc. My only complaint here is the terrible quality of the yellowish subs.

Arguably the finest film from Lina Wertmuller is finally in R1 land but disappointingly it is not enhanced for widescreen TV's. Nevertheless, the quality of the print herein discussed is more than acceptable and there is no reason for you to avoid it. Hopefully with the HD era upon us Koch Lorber will one day revisit the film and provide the necessary adjustments.