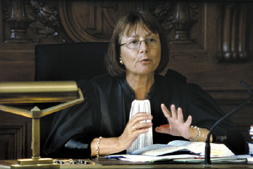 A fascinating look at the French legal system 10e Chambre - Instants d'audience a.k.a Tenth District Court is a documentary picture in which a total of twelve cases are being investigated by Judge Michele Bernard-Requin. Stripped of any excessive glamour thus providing only facts as they are being introduced to prosecutors and defense as well as consequently being judged by the court this documentary is indeed more about human behavior than it is about crime. Director Raymond Depardon takes its viewers on an unusual trip where criminals and those being wrongfully accused are given the opportunity to explain and defend their actions.

I don't think there is much in this film that the title does not reveal. Following case after case and the verdicts announced by Judge Michele Bernard-Requin Tenth District Court is anything but your typical "reality show". In fact, just about any show that you could currently see on American television claiming that reality is the inspiration for its existence will probably fail to live up to the standards set by Raymond Depardon. This dry, straightforward, yet impressively indicative for the French judicial system feature tells it as it is: people are being questioned and judged for the wrongdoings they have committed.

I was enormously impressed with the legal skills of Judge Michele Bernard-Requin! I don't quite know how long it took Raymond Depardon to convince Judge Bernard-Requin that having his cameras in her court room would not jeopardize the integrity of her work but you truly have to see how she juggles with all sorts of (obviously) false statements and legal red-tape before the court delivers its verdicts. Time after time the camera focuses on her face and those standing in front of her and the transformation these people undergo is remarkable. Those of you interested in human psychology and the endless universe of human behavior will find plenty to discuss after the final credits roll.

Despite of all the colorful characters in Tenth District Court and the social baggage they come with I find it difficult to believe that anyone would be able to unearth any conclusive evidence about the manner in which the legal system in France functions solely based on what Raymond Depardon has filmed. Yes, what we see is different than what one is likely to encounter in an American court room but there are also a lot of similarities as well. The overused calls for justice and equality which some of the defendants resort to are nothing that American courts have not seen before. Unlike Judge Judy and the endless copycats seen on domestic TV however Judge Michele Bernard-Requin managed to convince me that not only is she well-versed in French law but she also knows plenty about human psychology as well. The impressive finesse with which some obviously manipulative statements were dealt with in my opinion is a good enough reason to recommend this film to those of you willing to learn a bit more about a civil judge and her courtroom.

Presented in its original aspect ratio of 1.66:1 and enhanced for widescreen TV's Tenth District Court looks very well. Shot entirely within the confines of the court the DVD offers excellent contrast, great natural colors, and edge enhancement kept to a minimum. Furthermore, I did not notice any dust or specs marring the print. All in all a great presentation!

The film is presented with its original French track in Dolby Digital. As this is an entirely dialog-driven feature the Dolby track is more than enough. I could not detect any problems with the audio presentation and as far as I am concerned Koch have mastered the disc perfectly. However, I do have a problem with the fact that they continue to use the yellow, uncharacteristically large, subs. Is there a reason why they have to be so enormously big? Why not use the slightly smaller font that European distributors do? And of course the yellow subs that many were disappointed with when La Dolce Vita was released: I would certainly like to see that in the future white subs become the norm. In French with optional English subtitles.

I am enormously pleased to see that there are a number of good extras on this DVD. There is a great discussion with the director of the film Raymond Depardon and Judge Michele Bernard-Requin where the audience at a certain theater in Paris is given the chance to ask questions pertaining to the history and materialization of this project. Mr. Depardon explains that Tenth District Court was a natural continuation of his 1994 documentary feature Delits Flagrants. As it appears the film was shot over a period of three months while the judge allowed the cameras in her court. I would strongly recommend that you see the manner in which she explains her actions in court. Quite fascinating!
Next, there is a short segment titled "Discussion of Film Shoot by Raymond Depardon" where the director explains precisely how he placed the camera in order to capture most accurately all of the emotions raging in the defendants. Next, there are two deleted scenes revealing footage that was omitted from the final cut of the film. Both of those scenes are rather short and I can hardly see a reason why they should have been kept in the final version. This is mostly footage focusing on a few extra questions which the judge is asking. Last but not least there is the original French theatrical trailer for the film.

I enjoyed this documentary very much! I was also tremendously impressed with Judge Michele Bernard-Requin. She is indeed a true professional that knows the ins and outs of the legal system. With this said the film will probably prove to be a difficult viewing material for many but I encourage you to give it a chance. I would also encourage those in the legal system as well as students studying law to see Raymond Depardon's film. There is always something more that you could learn by observing how law is treated in a different country. RECOMMENDED.