Love Is My Profession (French Release)

Severely criticized and consequently denied a major distribution deal in the US Claude Autant-Lara's En Cas de Malheur a.k.a Love Is My Profession (1958) tells the story of young and beautiful pickpocket Yvette (Brigitte Bardot) who gets in trouble with the law. Andre (Jean Gabin), an aging and very-well known in Paris attorney, decides to pick Yvette's case but soon finds himself entangled in a deadly game of seduction. Unable to resist Yvette's beauty Andre falls madly in love with her.

A classic story about an impossible affair where age and beauty collide En Cas de Malheur is arguably Brigitte Bardot's most scandalous film. Teaming up two of the most beloved French actors from the 60s director Claude Autant-Lara created a film that did not quite meet the general expectations European audiences had. From a film about a sweet affair with a twist En Cas de Malheur evolved into a scandalous tale of impossible love with a tragic finale.

Despite of the clichéd-story: an older man loses his mind over a girl who could be his daughter this most unusual film helped spread the Bardot myth all over the world. Her famous nude scene was so passionately debated at the time that film distributors had to take extra precaution to assure the guardians of decency how most innocent Bardot's acting was. It did not work!! Even in France En Cas de Malheur was censored and only years later the "missing" footage was restored. 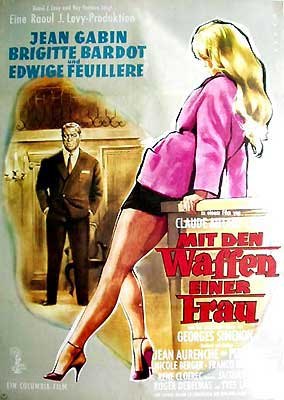 So, was Bardot's scandalous scene the only aspect that granted En Cas de Malheur its cult status? Yes, and no! Aside from all the attention that censors showered Claude Autant-Lara's film with those who initially saw the film also enjoyed a story which proved anything but predictable. The unconventional narrative which En Cas de Malheur offers most certainly created a sea of debates as to what the "moral lesson" of this film was. Needless to say this only further solidified Bardot's status as one of the most glamorous actresses to perform in French cinema during the 1950-1970s.

Yet, the story offered plenty of familiar elements that could be traced back to the classic melodramas and even some of the noir-films that were created at the time. In fact, this was anything but an easy project for Bardot whose involvement with the legendary Jean Gabin caused plenty of issues on the set. Previously Bardot had worked with some of the great French actors of the era, most notably Jean Marais in Futures Vedettes (1955) and Gerrard Philipe in Les Grandes Manoeuvres (1955), but truly no one as intimidating as Jean Gabin. As a result En Cas de Malheur meant a lot for the French beauty.

The films of Claude Autant-Lara most certainly have a special charm that I can hardly compare to anyone or anything else from that unique for European filmmakers time – the late 40s and early 50s. Autant-Lara's famous Le Diable au Corps a.k.a Devil in The Flesh (1946), a film that Marco Bellocchio will later remake, left an indelible impression on me. And while En Cas de Malheur is not as moving as Le Diable au Corps it is a great, great piece of cinema that is sexier than most everything modern film directors produce these days.

Presented in its original aspect ratio of 1.33:1 En Cas de Malheur looks fantastic!! Deep and vibrant blacks, sharp whites, superb degree of contrast, and not a tiny dust speck that I could spot transform this print into an easy pick for any Bardot fan. The progressive image is so strong that I saw the film two nights in a row just to enjoy how beautiful the black and white reproduction was. I have to state here that top label Rene Chateau must have invested a great, great deal of restoration efforts in this film (and who could blame them given the status the film has amongst European men) as I am shocked to see such a pristine condition. This is quite amazing folks! Region 2, PAL.

Presented with its original French Mono track and optional (white) English subtitles the film sounds magnificent: crystal clear dialogs, no hissing or pop-ups that I could hear, and just an all around great restoration work as one is likely to get from Rene Chateau.

Note: I would like to point something to your attention which I believe should be mentioned. As I viewed this film twice the first night I used a standard Cyberhome 500 player to view it at home while the second night I saw it via a large digital projector hooked up to a Phillips player. On the Cyberhome 500 player about 20 minutes into the film for about 5 min the audio gets some static effect. Everything is still crystal clear but I have heard this in other old movies and maybe it is how films get affected by time. It is at the end of chapter 4 and it lasts for about 4-5 min. I suppose it is just the age of the film that is all. All of this is barely noticeable on the Phillips player.

Rene Chateau have provided some interesting extras for this DVD release. First, there is the scene (one of two) that made this film so scandalous: we see Brigitte Bardot slowly removing her skirt and attempting to seduce the aging attorney. With a pair of sheer stockings on she is stunning!! I can see (and I can see) now why this film was so hotly debated. Next, there is a special commemorative gallery of stills (with tiny comments) marking the collaboration between the great Jean Gabin and writer George Simenon. Next, there are twenty selected stills from the film including the above mentioned scene where Bardot attempts to seduce Gabin. Next, there are two trailers: one for En Cas de Malheur and one for La Traversee de Paris plus an extract from La Lumiere d'en Face. Last but not least there are selected filmographies for Jean Gabin and Brigitte Bardot that roll in front of you under the pleasant score of the film.

There is hardly a better studio in France when it comes to treating cult/period French cinema with the proper care. Rene Chateau are simply the only game in town, plain and simple!! I still consider their initial release of Melville's Le Samourai the definitive version of the film, not the Criterion R1 release. Unfortunately, about 98 % of their catalog does not offer English subtitles for the films they own. Which in my opinion is a good enough reason to hate the French! All you have to do is glance through the restoration work they have performed for some of their films (Belmondo, Aznavour, Biraud, De Funes, Auclair, Bourvil, Delon…it is all there folks!!). But it also stays there!! Rene Chateau are also the undisputed kings when it comes to designing those magnificent covers inspired by old French vintage posters. I wish a few of the American studios would take a look and copy their work.
As to En Cas de Malheur: I loved every bit of it!! A great classic story (with a surprising ending), great music, and so, so sexy!! All of it offered in a classy, if modest, little package. HIGHLY RECOMMENDED!!