The Movie:
Ang Lee did it with Crouching Tiger, Hidden Dragon, and Zhang Yimou did it twice over with Hero and House of Flying Daggers. Both filmmakers acclaimed for their serious dramatic work made huge international hits after dabbling in the epic kung-fu fantasy genre. Encouraged by their success, Chinese director Chen Kaige (Farewell My Concubine) decided that he needed a piece of that action too. The result of his ambition is The Promise (Wu Ji), which at the equivalent of $35 million USD is thus far the most expensive film in Chinese history. Unfortunately, as China should have learned from Hollywood, throwing money at a project won't make a bad picture good if the story and script just aren't worth the expense.

The Promise has an overabundance of characters and plot-lines. To give a brief overview, we start with Qing Cheng, a starving orphan girl who agrees to the title deal with a mischievous goddess named Manshen. The grown up Qing Cheng (played by Cecilia Cheung of One Nite in Mongkok and Zu Warriors) will have a life of fabulous wealth and luxury, at the expense of losing anyone she loves. It didn't seem like such a bad tradeoff at the time. Manshen has also been toying with the arrogant General Guangming (Hiroyuki Sanada of The Twilight Samurai), the so-called "Master of the Crimson Armor". Confident that he can outwit her, Guangming bets that he can race Manshen to the royal palace to rescue the king of the land from his enemies, in exchange for future victory in every battle he ever fights. Unluckily, before he can get there he is injured by the stealthy assassin Snow Wolf, and must instead send his slave Kunlun (Jang Dong-Gun from Tae Guk Gi: The Brotherhood of War) disguised in his famous armor to save the king instead.

Following so far? Kunlun happens to have incredible speed and can run faster than the wind, which gets him to the palace on time, but his misinterpretation of the events happening there leads him to mistakenly kill the king instead of rescuing him, which allows the villainous Wuhuan (Nicholas Tse, New Police Story) to rise to power. In the process of all this, Kunlun escapes with the princess Qing Cheng, the girl we met earlier, and this being a movie of course he falls promptly in love with her. The problem is that Qing Cheng thinks that he's Guangming and throws all of her affection the general's way. Naturally, Wuhuan is also in love with the princess (why wouldn't he be?) and now wants to kill the general. Wuhuan's assassin Snow Wolf is dispatched to take care of the matter, until discovering a secret link between himself and the speedy Kunlun. Little do they all know that fighting for Qing Cheng's affection might not be such a good idea in light of Manshen's curse on her.

Rich in exquisite photography (by Crouching Tiger's cinematographer Peter Pau) and thousands of elaborate costumes, the film is truly lovely to look at, at least until the cheap-jack CGI visual effects appear on screen. To call the computer graphics in this film Playstation quality would be an insult to video games. The CGI is embarrassingly poor, and the movie is so filled with bad examples of it that I can't begin to catalog them all. With some of them, you can at least understand what director Chen may have been going for in terms of interesting images. There's a scene where Kunlun, with Qing Cheng tied to a rope behind him, runs so fast that the girl is lifted airborne like a kite. It's meant to be poetic, even if it looks kind of goofy in execution. But then there are other scenes that, no matter how well the effects had been done, would still be frankly idiotic, such as Kunlun crawling on his hands and knees with another person on his back yet still managing to outrun a herd of stampeding bulls. There's no way that could be directed or animated without looking foolish.

A good movie can overcome poor technical elements, of course, but in the case of The Promise a bland script and mediocre storytelling are even more problematic than the visual effects. The story is nothing but a formulaic love triangle (or quadrangle, really) made overly confusing by fantasy elements such as Kunlun learning to run faster than time itself so that he can trick the girl he loves into falling for his master, who she thinks is really him, even though he actually wants her for himself, and various other plot machinations that get even more convoluted. They're all used to give the impression that the film is a rich fantasy tapestry of epic proportions, but in reality it's mostly just dumb. Wanting desperately to be the next Crouching Tiger or Hero, Chen Kaige's The Promise is in nowhere near the same league. 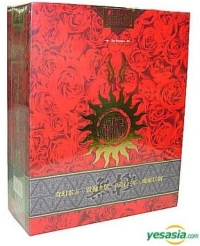 The Promise comes to DVD in several different editions. In Hong Kong, Deltamac has released the film in a basic single-disc version with no bonus features, or a slightly more elaborate 2-disc Limited Edition (reviewed here) packaged with some postcards and a booklet of costume sketches. Both DVDs are coded for all-region NTSC playback and will function in any American DVD player.

Bigger fans of the movie, assuming there are any, will want to seek out the deluxe 5-disc Premium Edition box set from Mainland China. The discs in that package are said to be coded in the PAL video format and will require compatible equipment to operate.

Video:
I'll assume that the first disc of the Limited Edition is identical to the standard single-disc release. The movie has some wonderfully colorful and vibrant photography, which the DVD barely does justice. The picture is presented in its theatrical 2.35:1 aspect ratio with anamorphic enhancement, but is obviously sourced from a PAL-to-NTSC conversion. The image frequently becomes smeary during motion due to problems with blended frames. The digital compression quality is also rather poor, with a lot of blatant compression noise and shimmer in fine object details.

On the plus side, the colors are nicely reproduced, and the picture is fairly sharp in scenes without CGI, though some minor edge enhancement artifacts are present. Many scenes with CGI have been softened in an attempt to blend the effects better with the live action footage (it doesn't really work). In the end, this is a very disappointing transfer for what should have been a real eye candy spectacle.

Audio:
The movie's original Mandarin language soundtrack is available in Dolby Digital-EX and DTS-ES Matrix options. Both are extremely loud and bassy, especially the DTS track. My wife stormed into the room on no less than five occasions to complain about the noise, until I turned my master volume down to approximately half of its normal default, which made the dialogue a lot harder to hear. Bass junkies may rave about the extended dynamic range, but I felt that the track wasn't well balanced.

I'm not sure why the studio bothered with the EX and ES encoding other than for marketing purposes. Not only does the movie not have much surround activity from the center rear channel, it has hardly any surround activity at all. I only noticed my surround speakers in use during two scenes. To be fair, both of those instances were extremely directional (one involved a sound swirling from speaker to speaker around the entire soundstage), but for the most part the rear channels are completely dead.

A Cantonese dub in Dolby Digital-EX has also been included. Optional subtitles are provided in either English or Traditional Chinese. The English subtitles are written in an ugly white font and appear half-in and half-out of the 2.35:1 movie image. The English translation is a little stiff in places but mostly coherent without significant grammatical problems, except for a couple of scenes near the end that are very confusingly written.

Extras:
As mentioned above, the Limited Edition is packaged with some postcards and a costume sketch booklet. Disc 1 has no bonus features. The supplements are all found on Disc 2, and they're pretty underwhelming.

We start with Trailers and TV Commercials. There are two trailers in non-anamorphic letterbox and 4 TV spots. Optional English or Chinese subtitles are available for all.

The 10-minute Behind the Scenes featurette comes straight from the movie's Electronic Press Kit and is pure fluff.

10 Unforgettable Scenes is just about the most worthless special feature I've ever seen on a DVD. It is literally just 10 supposedly memorable scenes from the movie presented independently. That's it.

I wasn't expecting much from the Star Interviews section, but this is surprisingly the most substantive feature on the DVD. Eight interviews with the cast and crew are provided, each about 10 minutes long. Together they comprise a reasonably thorough look at the making of the film. Notable is just how arrogant Chen Kaige sounds when talking about the movie's story and themes.

Final Thoughts:
The Promise is a movie filled with pretty colors and a lot of visual panache, hampered by bad CGI effects and a poor script. As eye candy it's worth a rental, but certainly not a purchase, especially considering the poor quality of the DVD.