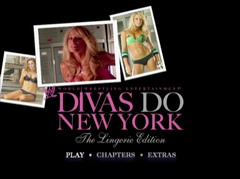 WWE Divas Do New York: the Lingerie Edition is the DVD companion to the magazine on the newstands. This time, instead of traveling to some exotic, lush island paradise, the girls hit the Big Apple armed with the sexiest of lingerie. After last year's adventure in Mexico (and with some introspection), I realized I might've been harsh on that release. It delivered on its promise - attractive, scantily-clad females writhing around in a tropical setting. Yet AGAIN, the WWE has put together a superb package featuring Divas from both brands. 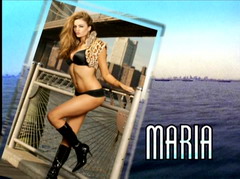 Maria's photo shoot takes place on the Brooklyn Bridge. Unlike her WWE persona, she's quite bubbly and seems to be more intelligent than she acts on the show. While she was shooting, there was also a wedding and an amorous chef from a nearby restaurant who had a plateful of Bay Scallops Serveche delivered in an attempt to win her affections. She enjoyed the treat, but ends up forgetting his name. Poor guy. Kristal, the latest WWE SmackDown! Diva, is up next. Originally a Raw Diva Search contestant, she ended up making it to the final four, before showed up on SD! this past December. It's good to know we suffered for a reason. She spends some time discussing her favorite lingerie before talking about her Diva search experience and giving an acceptance speech (for what, I have no idea).

Victoria's photo shoot takes place in a New York nightclub called Crobar. During the interview, she talks about being the MVP of Raw Divas (rightfully so) and declares that she might not be the sexiest Diva on Raw, but she's the toughest. I'd have to respectfully disagree. She's both tough AND sexy. It's a shame she didn't discuss how criminally underutilized she is in the ring. She REALLY deserves to be doing more than holding the ropes open for and giving a quick peck on the lips to Candice to make the wrestling geeks all tingly. 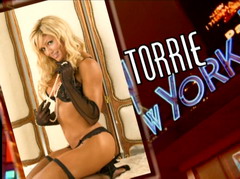 Torrie spends her time talking about her monthly budget for lingerie and how she she has two separate lingerie collections since she feels that it's tacky wearing work lingerie at home. Stimulating conversation, but she gets a pass since her photo shoot takes place after a red eye to New York. Ashley is the 2005 Raw Diva Search winner. Her photo shoot starts at Sheep Meadow and ends up at Times Square, where she tells us the old WWE restaurant has a place in her heart - since that's where she won her first New York state final Hawaiian Tropic pageant. She also talks about doing Stuff, Flex and Maxim magazines. She throws in the fact that her father and brothers are wrestlers too. I guess the apple fell FAR from the tree.

Mickie James, the newest WWE Diva, touches on the fact that she's been wrestling for seven years, but spends the majority of her time talking about the lingerie she's wearing. As i'm looking at the second sexy outfit while she's talking, I realize it doesn't bother me in the least. Dancing With the Star's Stacy Keibler is next. Shooting at 9am in Madison Square Park, she eventually makes her way to the nightclub duvet. Dancing is mentioned, and also talks about how she wanted to be a Rockette after being trained by one. Unfortunately, she those 61 inch legs got in the way. She also mentions her Stuff magazine shoots, winning the WWE Babe Of the Year this year, and that while she doesn't plan her future, she's happy at the WWE. We'll see how long that lasts. 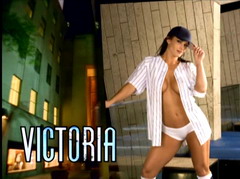 Sharmell is the Diva who seems to get the most personal treatment. At the beginning of her interview, she admits she's not a lingerie-type person. She talks about winning Miss Black America 1991. After finishing her tour, she completed college and then toured with James Brown. From there, she became a Nitro girl. When the WCW folded, the girls cut a CD, but since they couldn't sing, she called WWE looking for work. She hit Ohio Valley in 2001, and after hitting Raw in 2002, she tore her ACL. Sharmell went on to marry Booker T in 2005 and eventually joined the WWE and became his manager.

Lita's shoot is at Crobar too. She mentions being "the most dominating diva in the WWE". I have to bite my tongue to keep from laughing. She also mentions her injuries and states that she's at the level she wants to be. Next! Melina, the manager of MNM, a tag team that has earned my respect, storms Grand Central Station. She talks about MNM's time in OVW and her ring entrance and boasts that the other Divas are "too skinny, too long, don't have any shape" and that she has "curves all over the place." Well, I can't argue with that. Her curves are on FULL display as she wanders around the Station in some very sexy lingerie.

They've saved the best for second-to-last with the lovely Trish Stratus. Her beauty is matched by her wicked sense of humor, which is evident with her joking during her interview. There's some small talk about her choice of lingerie, her relationship with Rich, the photographer, and her gorgeous abs. She also mentions shooting some candid shots in the bathroom, but the digital camera wasn't working, so they had to "pose" in the bathroom - which took away from the spontaneity.

I'd really like to tell you what Candice said, but her voice is unbearable. Truly unbearable. While I might not care much for Edge, he was right on target when he told her that her voice sounding like nails along the chalkboard. I see her as she walks through Times Square in some sexy lingerie. Oh yeah, her lips were moving too.

Since the main feature has a paltry one hour running time, the WWE has packed a TREMENDOUS amount of extras. I think it's a mandate that each DVD release contain, at the very minimum, two and hours of extra material - which definitely gives the fans more bang for their buck. All the Extras on this disc are, of course, Diva related. The chapters are as follows: 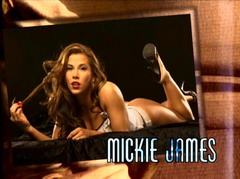 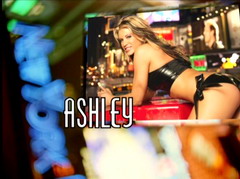 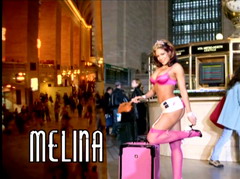 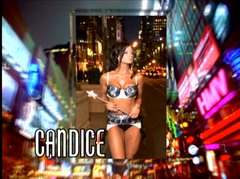 Video: WWE Divas Do New York: the Lingerie Edition was a great looking disc. There were no flaws or compression issues. The blacks were dark and the picture was sharp. There are a variety of ratios, but for the most part it's in the full frame 1.33:1 ratio.

Conclusion: This WWE Diva DVD didn't annoy me as much as the previous one did. It could be due to the HEAVY layoffs that occurred right around that disc's release date, but i've learned to just grin and bear it when it comes to the WWE's ideas of what wrestling fans want (or complain in DVD Talk's Sports Talk Forum). As long as Trish, Victoria and now Mickie are still with the company, I can ignore all of the superfluous stuff. This collection showcases the Divas and the great city of New York City in a favorable light and, though the main feature is merely an hour long, they've packed on a lot of extra footage, making this a Highly Recommended release.