"Our bodies are all we have left…to fight the occupation"

The time has finally come. Said (Kais Nashef) and Khaled (Ali Suliman) are informed that their wish is being granted. Soon they will be able to join the martyrs who gave their lives for the Palestinian cause. The two men are visibly excited, at times even nervous.

It is now time to begin preparation: Said and Khaled will record a farewell message for their parents, their bodies will be shaved, and finally they will have a simple meal with their comrades. On the following day the two lifelong friends will be smuggled in Israel where they will blow themselves up in the middle of a crowded tourist area.

Paradise Now, this year's official Palestinian Oscar entry, comes amidst a sea of controversial films dealing with the deadly conflict between Israel and Palestine, many of which are yet to see a willing US distributor. From Berlin and Utrecht, Holland to Vancouver and Los Angeles this bold new Palestinian film has gathered the acclaim of both critics and audiences around the world shedding light on a subject that until recently conventional cinema considered too "risky" to present as entertainment for the masses. After September 11 however the number of directors who felt that now is the time to focus their cameras on the conflict between Israel and Palestine, and the alarming number of suicide killings that have plagued their confrontation, seem to have grown tremendously.

The film, a massive Palestinian/German/French/Dutch/Israeli project, became possible thanks to the strong efforts of German-based label Constantin Film who also brought us the fantastic Der Untergang (2004) about the last days of Hitler. In a somewhat similar manner Paradise Now goes deep into the souls of two suicide killers who have nothing left to live for but their faith. Chillingly realistic, stripped of any conventional glamour, and asking gut-wrenching questions Paradise Now is without a doubt the most controversial film to arrive on US soil this year.

Having seen this film three times already I find it extremely difficult to review what I saw in it. Unlike many "controversial" films that sporadically appear in cities around America Paradise Now truly attempts to do the impossible: uncover a piece of sanity in the world of two men willing to die for what they believe in. Brutal, perhaps too honest for Western viewers, and above all too controversial even for my taste this is a film that goes to the other side of the barricades, the one which we usually judge only by what the news networks allow us to see. 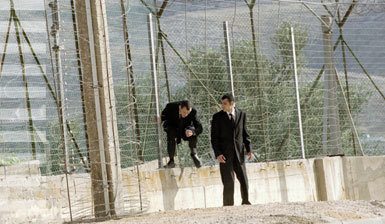 I suspect that anyone who sides with either of the two conflicting parties in this film will eventually find Paradise Now too "compromised". Those sympathizing with the Israeli side will likely see a masked attempt to present the suicide bombers as "freedom fighters". On the other hand those who side with the cause of the uprooted Palestinians will see plenty of "truth" revealing a world engulfed by desperation. Those like me who have never experienced the horrors of this bitter conflict will once again attempt to understand why politicians from both sides continue to exterminate their own people.

I am convinced that many will see a number of "flaws" in Paradise Now as well. People will attempt to deconstruct its nuanced narrative often drawing conclusions that this is indeed a biased film, one that does no good. And probably rightfully so! Yet, in my opinion Paradise Now is a powerful film that should make you think why people are willing to take their own lives. As there is no cause or faith worth dying for!!

Official US site and trailer:
http://wip.warnerbros.com/paradisenow/ 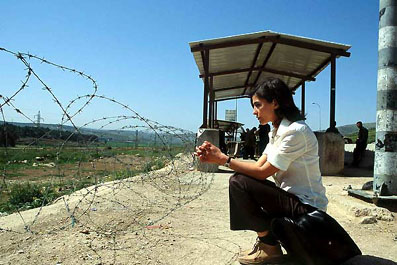 Presented with its original aspect ratio of 2.35:1 and enhanced for widescreen TV's Paradise Now looks very good. Distributed in North America by Warner Independent Pictures the print provided for this film is in a near perfect condition. With strong colors (excellent yellow and black color reproduction in the opening scenes), a fine degree of detail, contrast that truly brings up the marvelous looking West Bank, and virtually no edge enhancement that one should be unhappy with this R1 DVD indeed shows the film in a manner almost identical to the theatrical print I saw. I could not notice any print damage either (sans one dust spec which appeared in the very first scene of the film) which clearly should have been expected from such a recent film. Indeed, Paradise Now lives up to the high standards we have come to expect from Warner Brothers and all of their offshoot labels.

Presented in its original Arabic language track (with only a few instances of English) and a powerful Dolby Digital 5.1 mix Warner Independent Pictures' release of Paradise Now is a remarkably good sounding DVD. With a hypnotic soundtrack that is a vital part of the film's presentation this DVD allows full use of the rear speakers while at the same time maintains a clear and crisp dialog that is easy to follow. There are no hissings, drop-outs, or foreign pop-ups that I could detect. With optional English, French, and Spanish subtitles.

Those impatiently awaiting the R1 release of Paradise Now in hope for some substantial extra materials will be bitterly disappointed as the only piece of "extra" provided for this DVD is the US theatrical trailer. This is truly a missed opportunity by Warner Independent Pictures as there have been a ton of interviews, conversations, and all sorts of extra footage from festivals around the world that could have been included here. What a big, enormously big gaffe!!!

I could not wait to get the R1 release of Paradise Now hoping that there will be plenty of extra materials to support this most controversial film. Unfortunately while the audio/video presentation is at the typical for Warner Brothers high-quality the extras-presentation or lack there of is once again most disappointing. With this said, Paradise Now is easily the most controversial film to be released in North America this year and I feel almost guilty for not being able to grant it the DVDTALK Collector's Series mark.