When Ricky (Antonio Banderas) is finally released from prison he immediately heads back to the woman of his dreams: film star Marina Osorio (Victoria Abril). But Marina hardly even remembers Ricky! Dedicated to win her heart Ricky will do the only thing that seems logical to him - he will kidnap Marina, tie her up, and convince her that he and only he could be the man of her dreams.

Spanish director Pedro Almodovar is most certainly not a stranger to creating films with plenty of spicy sex, colorful characters, and intoxicating Iberian music. In fact, there is hardly anyone else that could better transform the unconventional into conventional, the sad into funny, and the kinky into, well, even kinkier!! If there is a better filmmaker that knows how to fascinate his viewers with stories that would otherwise turn heads away then I most certainly have not heard his/her name yet!

¡Átame! a.k.a Tie Me Up, Tie Me Down (1990), the Spanish director's highly controversial film that catapulted Antonio Banderas' name amongst Europe's most respected actors, indeed continues Almodovar's fascination with the subject of love and all of its unlikely reincarnations. In Tie Me Up, Tie Me Down Almodovar follows a colorful male individual whose obsession with a well-known film actress forces him to perform some rather unusual deeds. From mild bondage to some painfully hilarious lovemaking scenes this is a film that most definitely solidified Almodovar as the undisputed master of the bizarre. 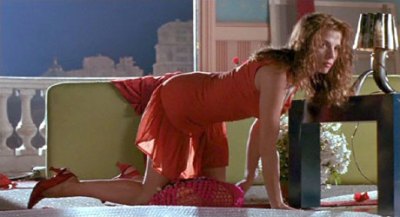 Teaming up two of Spain's darlings, Antonio Banderas and the enigmatic Victoria Abril, Tie Me Up, Tie Me Down was not made for the prudes amongst us. The film's touchy subject and Almodovar's attempt to understand the behavior of a man who just about any self-respected community would view as a dangerous sociopath created a sea of emotions in me that only Jennifer Lynch's Boxing Helena (1993) somewhat matched. While Lynch's film however was chillingly realistic and at the end became quite disturbing the more I saw from Almodovar's Tie Me Up, Tie Me Down the more I liked it. The absurdity of the situations the two main protagonists were left to deal with was so hilarious that I often had to reach for my handkerchief.

Almodovar is most definitely a film director whose unique talent always fascinates as many people as it interestingly enough forces into fiercely scratching their heads attempting to figure out why he is held in such a high regard. There are times when even I was a bit unsure as to how serious the Spanish director was with his depiction of the deplorable (his Dark Habits quickly comes to mind) even though I was well-aware of his edgy humor. In Tie Me Up, Tie Me Down however the "controversial" aspects of the story are most certainly held in check and only the most naïve amongst viewers will have a terrible time acknowledging how benign this film is. Or, maybe not!!

Winning the snubbing NC-17 rating by the watchdogs at the MPAA Tie Me Up, Tie Me Down was thrown into the same pool of films that typically reveal quite a bit more than what Victoria Abril and a tiny plastic scuba-diver toy did in this story about (un)shared love. Strangely enough no one saw the humor in this most hilarious scene and consequently the film became persona non-grata for family-friendly theaters around America. But…mission accomplished! Yet another degrading and morally-disturbing film, sprinkled with a few tasteless laughs, was sanitized for the well-being of our sensitive communities!!

Presented in its original aspect ratio of 1.85:1 and enhanced for widescreen TV's this Region 2 release by Pathe-UK offeres some great colors, a good degree of contrast, and mostly tolerable degree of detail. It appears however that similar to a few of Almodovar's earlier films that have been released in recent years Tie Me Up, Tie Me Down has not aged that well even though the film is not that old to being with. There are a few dust marks here and there that I could spot and while they are not as distracting as I have seen on a number of other releases they are nevertheless present on this print. They do appear mostly in the opening scenes and once the film settles in the presentation is quite nice and above average in my opinion. Region 2, PAL.

Presented with a Spanish 2.0 Dolby Digital mix Tie Me Up, Tie Me Down sounds quite well with a generally crisp and clear audio that allows the viewer to follow the dialog undisturbed by any defects. With optional English subtitles.

There are a few very interesting extras on this DVD which will surely make fans of the film happy. First there is a most unusual interview where Almodovar interviews Antonio Banderas with some provocative questions regarding his participation in the film. These are not shocking questions by any stretch of the imagination but nevertheless are quite entertaining to view. Next, there is a short footage from the premiere of the film in Madrid where we see Antonio Banderas and Victoria Abril performing the title song from Tie Me Up, Tie Me Down in front of a few hundred people. Who knew that they could be such a successful duet!! Next, there is a colorful gallery of theatrical posters for the film from around the world. Next, there is a generic production Still gallery and last but not least there is the theatrical trailer for the film (as well as a selected few others from Almodovar's body of works).

I decided to write a review for this R2-UK disc of Almodovar's Tie Me Up, Tie Me Down due to the fact that the R1 release has now gone OOP and due to some unknown to me reasons in the year of Almodovar when one would logically expect more and more from this most prolific Spanish director to appear on the US market less and less is being offered. With a few of Almodvar's best – Kika, Women on the Verge of Nervous Breakdown, and now Tie Me Up, Tie Me Down- being virtually declared non-profitable by the majors and hence thrown deep into their vaults the only choice film aficionados have to see these films is to either invest into a good region-free player and learn an extra language or two or…pray that amidst all the special, ultra-special, and ultra-special-extended-director's cut-approved versions of Black Hawk Down, maybe, someone will see Almodovar as being worthy of a few chapter-and-trailer Special Editions of his early films. Maybe...