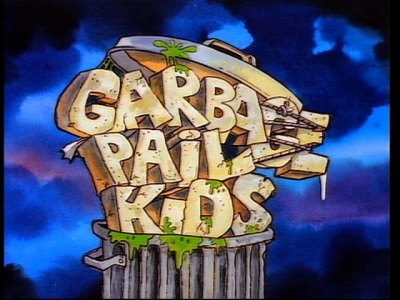 Before I get into trashing this 13-episode collection with merciless enthusiasm, let's make one thing clear:

I was just the right age to collect the old Garbage Pail Kids trading cards during the mid-80s. And collect them I did, even if I thought they were a much sillier (and lamer) version of "Wacky Packages.

I saw the live-action version of The Garbage Pail Kids and recognized it as a very unique and special piece of cinematic crap, but this animated series? Holy snot-rockets, nostalgia fans, it's a digital freakin' migraine.

Produced by CBS in the hopes of cashing in on the tail-end of the short-lived Garbage Pail fad (the original cards were scatalogical spoofs of Cabbage Patch Kids), the animated version never made it on the air here in the U.S. -- partially because of an uproar by parents' groups, but also (I'd bet) because it's some of the worst animation you'll ever see.

Tell me you love Go-Bots or Smurfs or Rainbow freakin' Brite and I'll just assume you grew up watching the cartoon, thus explaining your somewhat guilty affections for the characters. But since this Garbage Pail Kids cartoon never played on television ... there's simply nothing in the realm of "nostalgia value" to consider. This 13-episode collection stands only as a testament to how low cartoon producers would sink to sell some cheap-o Saturday morning advertising spots. 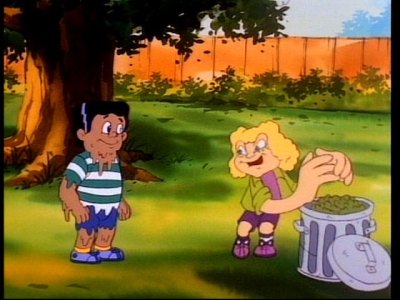 As far as I could tell from the 50+ minutes of barbed-wire-through-the-brain experience I had with Garbage Pail Kids, the show looked to be set up as a "two mini-stories per episode" deal. Part 1 of episode 1 deals with a freaky-looking bunch of giant space kids (toys?) who land on Earth and cause all kinds of ruckus you could only understand on LSD. And then we switch to the "stars," a bunch of unpleasantly Pail Kids who have strange and disgusting "powers."

One of the gang is like a toy who keeps getting dismembered. Another is a girl doll with no face who communicates by way of a mouth drawn on her hand. Another Kid is, I believe, entirely made of mud. And then there's a rubbery one and another who splits into two personalitites. It's all very complicated.

Following the brain-freezingly non-sensical intro sequence, we're treated to our weekly adventure. It's usually a really broad spoof on some nugget of pop culture, like when you do a spoof of "The Fly" and call it "The Fry." (As in french fries.) Just about every chapter deals with an important lesson like "slime can be helpful" or "body odor is something to be proud of."

And what a pedigree Garbage Pail Kids: The Cartoon comes with. A glance through the end credits indicates that this series was slathered together from folks who worked on The All-New Scooby and Scrappy-Doo Show, The Flintstone Kids, InHumanoids: The Movie, and Care Bears Movie 2: A New Generation. Yikes.

Episode titles, as if they matter, are as follows:

Video: Putting aside the ridiculously awful animation, the video quality's not all that bad.

Extras: None -- and I thank Paramount for small favors. 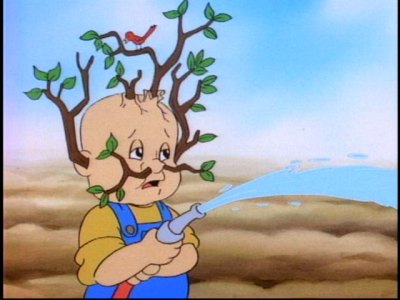 Basically, Garbage Pail Kids is about as good an animated series as you could probably get from a fad created by a trading card. The fact that this thing never played on U.S. television might make it a bona-fide pop culture curiosity, but it'll take only about 1.3 episodes before you'll catch a good dose of buyer's remorse.

Hate to say it, but score one point for the finger-wagging parents' groups. They might be censors, and that's bad, but they managed to keep this animated abortion off the air, and that's good.