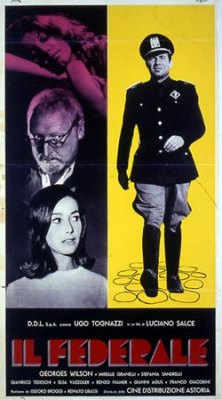 Ambitious fascist Primo Arcovazzi (Ugo Tognazzi) is asked to capture and transport famous communist Professor Erminio Bonafé (Georges Wilson) to Rome where he is to be judged by the Mussolini government. Primo accepts the mission hopping that upon completion this would be a great opportunity for him to become a field commander. He quickly uncovers the whereabouts of Professor Bonafé, takes him hostage, and the two head towards Rome.

But Italy is in war and the country has been swamped with German soldiers who more often than not seem to be avoiding the kind partnership of their Italian comrades. As a result, the ambitious fascist Primo and the passionate communist Professor Bonafé, become an easy prey for the Nazis. They are thrown in jail, attacked by local partisans, and even snubbed by a beautiful thief (Stefania Sandrelli) with plenty of tricks in her bag.

There is hardly another Italian comedian that has given me as many laughs as Ugo Tognazzi has during the years. Only Italian icon Toto (Il Comandante) was partially able to match the soft voice of Tognazzi and his uncanny ability to always get involved in the most ridiculous of situations and therefore provide me with plenty of laughs when I most needed them. Unfortunately the films of Ugo Tognazzi and Toto are virtually impossible to track down these days especially in an English-friendly form.

Il Federale a.k.a The Fascist (1961), a hearty comedy about the most unlikely friendship between two men standing on the opposite sides of the political spectrum is very much a road picture that lives up to the high standards of classic Italian comedy from the 50s and 60s. Filled with colorful characters who manage to create some remarkably funny situations while satirizing the Mussolini state and those who followed his orders Il Federale was directed by Luciano Salce whose only other film I have seen, Come imparai ad amare le donne a.k.a How I Learned to Love Women (1966), was also an Italian comedy teaming up some of the more attractive actresses to appear in cinema at the time: Anita Ekberg, Elsa Martinelli, Nadja Tiller.

The premise of the film is indeed quite fascinating - a fascist and a communist attempting to survive both partisans and Nazis while making their way to Rome. What could go wrong here? Well, just about anything is my answer for you! Showered with bullets and bombs, enduring cold rain and scorching sun, and outsmarted by the beautiful Stefania Sandrelli who makes these two men look like the biggest outcasts ever Il Federale is quite the journey. Add to the mix the enormously funny dialog and you have a film that matches some of the best comedies that Pietro Germi filmed.

The finale of Il Federale, as ironic as it may seem to some, is a perfect example of how absurd war always is. Creating the most outlandish situation that one could have imagined Luciano Salce completely reverses the roles of the main protagonists thus forcing his viewers to look beyond the comedy Il Federale offers. Indeed, as much as I laughed and enjoyed the awkward journey of Primo Arcovazzi and Professor Erminio Bonafé I was also reminded that war remains an act of madness that serves no purpose whatsoever.

Presented in its original aspect ratio of 1.85:1 and enhanced for widescreen TV's this Medusa-Italia produced DVD offers a near perfect image quality. Il Federale was shot in glorious black and white and the condition of the print provided for this Italian release is outstanding. With deep blacks, an excellent degree of contrast, remarkable detail, and absolutely no troubling damage that I could spot, this R2 presentation should meet the quality requirements even on the most demanding of viewers. With this said I am truly impressed how well some of these recent prints of classic Italian films look (Bernardo Bertolucci's Before the Revolution, Visconti's Bellissima, and now Il Federale). To sum it all up I could not be any happier with this release as I doubt it this film has looked this better even when it was first released back in the 60s. Region 2, PAL-encoded.

Presented with its original Italian Mono track and a newly created 5.1 mix Il Federale sounds very, very impressive. It shows right away that the producers responsible for this release must have employed a very skillful restoration team as the audio is so crisp and clear that one could hardly even guess that the film is more than 40 years old. There are no audio dropouts, hissing, or any other defects that I could detect. This is a perfect presentation which I can not recommend highly enough. Furthermore, as far as I am concerned the Mono track truly preserves the aura of the film and creates a much truer experience than the newly created 5.1 track. With optional, Italian, Spanish, and English (white, and very elegant small) subtitles.

Unfortunately the extras provided in this DVD release do not offer optional English subtitles. This is a bit disappointing but surely understandable as this is an Italian release after all. With this said in addition to the theatrical trailer Medusa-Italia have also supplied an interesting interview with Ugo Tognazzi and Luciano Salce where the two recall the history of Il Federale and how it was made a reality.

Lovely film!! Seeing another Ugo Tognazzi picture is always a treat!! I am rather sad that so many of his films are nowhere to be found in the US and the few available in Italy are not English friendly but this Medusa-Italia release is the complete package!! Super print (truly, you have to see how good this film looks), excellent audio, and a classy white case…what else could you ask for!! Fans of classic Italian comedy should not miss on owning this sparkling disc! Who knows how long it will be around!! HIGHLY RECOMMENDED!!