You know those movies that you only "kinda like" after seeing them once, but thanks to the magic of DVD and cable-induced repeat viewings, you slowly gain a new appreciation for them? That's Event Horizon, which is one dark and gory little sci-fi/horror concoction. Though it's not likely to win any originality awards (or screenwriting Oscars), this is a movie that more than delivers where it counts: Blood, jolts, and gravity-defying gore! 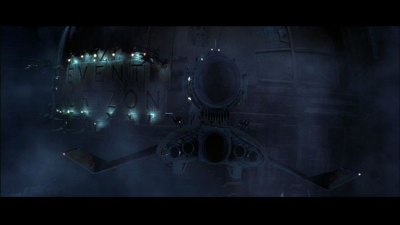 Written by Philip Eisner and directed by Paul W.S. Anderson (not to be confused with Paul T. Anderson, this is the guy who directed Mortal Kombat, Soldier, and Resident Evil), this is one of the nastiest and darkest haunted house movies ever to take place ... in outer space. With a surprisingly strong cast for such an obviously B-grade movie, a handful of thought-provoking concepts and a truly nasty sense of horror, this is a movie I find myself recommending more and more to people who are weary of such "science fiction" drivel as Lost in Space, Supernova, or Red Planet.

It seems that Dr. William Weir (Sam Neill of Jurassic Park) has discovered a way to expedite interstellar travel by creating small black holes with a "gravity drive." Weir's invention is installed into the ship Event Horizon and the ship takes off for Neptune. It promptly vanishes without a trace.

Seven years later, Weir is informed that the ship has been located. The ship Lewis & Clark is dispatched to check it out, with Cpt. Miller (Laurence Fishburne of The Matrix) at the helm. Weir is along as an observer, and the crew is comprised of the usual gang of colorful characters. What they discover upon their arrival at the Event Horizon is some truly nightmarish stuff. Not the typical bug-like aliens, but a "presence" that mystifies and horrifies the crew, while Dr. Weir becomes more and more ... weird. 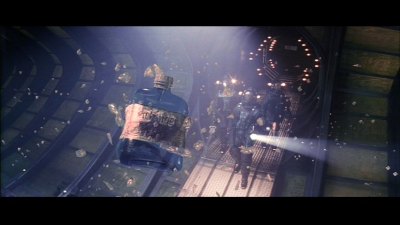 To say any more would rob you of a whole lot of nasty jolts and gruesome shocks. Suffice to say that Weir's "gravity drive" can not only travel through holes in space, but apparently has no difficulty in also visiting different dimensions (like HELL!!!) Although a fair amount is left up to the viewer's imagination, it seems logical to assume that the Event Horizon has indeed traveled "to hell and back."

The best thing about this admittedly derivative movie is that it's just so damn nasty. Little to no time is spent on things like "comic relief" and the result is a movie that becomes exponentially more unnerving as it continues. And although Event Horizon certainly seems "inspired" by countless other sci-fi / horror flicks (most noticably the original Alien), it also succeeds in carving out a little niche for itself as well.

With few exceptions, the cast is first-rate. Sam Neill has a skill for making the most absurd ideas seem realistic, and Laurence Fishburne gives a great understated performance as the level-headed commander. In smaller roles, Kathleen Quinlan and Jason Isaacs do solid work, and Richard T. Jones and Jack Noseworthy aren't half bad either. Obviously these "lesser" characters are simply corpses waiting to happen, but the actors infuse each part with just enough touches of personality to make you care when they get splattered.

What's particularly notable about Event Horizon are its stellar (and generally nasty) special effects and its dread-inspiring production design. The Event Horizon itself is simply an interstellar haunted house, but director Anderson has a keen eye for groovy details. Whether its a bunch of gravity-challenged blood drips or a split-second recording of some awful carnage, Anderson keeps tossing some fun stuff onscreen, most of it pretty darn unsettling. I mean that as a compliment. 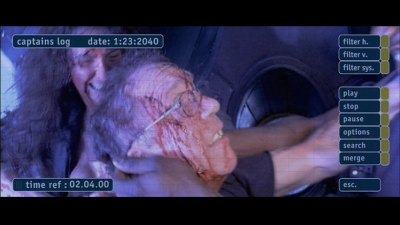 Dismissed by many critics and the public at large as just another spaceship flick, Event Horizon has earned itself a strong cult following since its theatrical release. (OK, it's me and three of my friends, but hey.) But if you're a fan of the outer space thing, and you have a taste for stuff a little on the gruesome side, you could do a hell of a lot worse than Event Horizon. I may be damning this movie with faint praise, but I'd list Event Horizon as one of my favorite sci-fi-scary movies of the past ten years, and certainly one of the most underrated.

Fair warning, though: This is an exceedingly bleak little chiller, in tone, theme and (especially) execution.

Video: It's an anamorphic widescreen (2.35:1) transfer, and it looks pretty damn excellent. I don't own the original (bare bones) DVD release, so I cannot compare the picture quality between the two ... but this as good as I've ever seen Event Horizon look.

Audio: Dolby Digital DTS*, 5.1, or 2.0 English; French 5.1 Surround. Optional subtitles are available in English and Spanish. (* Yes, there's a DTS track included, although the DVD case makes no mention of it.) Audio quality is quite strong throughout, with the creepy sound effects and moody score coming through in fine form. 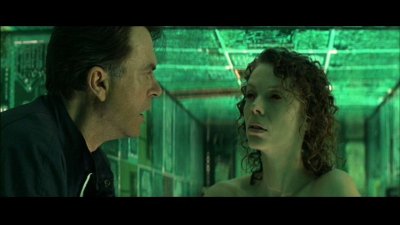 The only extra feature on disc 1 is a feature-length audio commentary with director Paul Anderson and producer Jeremy Bolt. The two filmmakers deliver a healthy dose of on-set anecdotes and modest criticisms. It's not the most dazzling chat-track you'll ever hear, but fans of the film will certainly enjoy it.

We start disc 2 under the heading of The Making of Event Horizon, which contains five different chapters:

The Body of the Beast (22:44) runs through the entire cast, careful to dole out some love for everyone from Fishburne to Quinlan to Pertwee. Bolt and Anderson return for some interview segments, and are joined by FX supervisor Pauline Fowler and actor Jason Isaacs.

Liberate Tutume Ex Infernis (19:49) looks at the Event Horizon practical FX work, from the extremely disturbing visions of hellacious carnage to the interstellar sequences to the massive stage constructed to create the Horizon's bizarre engine. Gore guru Bob Keen joins the interview panel as he goes through some of his more unpleasantly creative creations.

The Scale to Hell (18:36) features FX producers Stuart McAra and Richard Yuricich as they go through the post-production workload, concentrating mainly on the magic used to bring a mile-long spaceship to life. Also covered here is the "space station fall-back" shot, which is my favorite visual trick in Event Horizon.

The Womb of Fear (26:30) covers the post-production, with an impressive amount of attention paid to the editing and test-screening problems. Anderson and Bolt are forthright about the behind-the-scenes issues, usually blaming "the studio" for the problems in the final cut. Also included is a section on the musical score and a fan-friendly little wrap-up in which the flick's staying power is acknowledged.

Taken in "Play All" fashion, The Making of Event Horizon is exactly the sort of doco the fans will devour. And speaking as only one specific fan, I call it darn good stuff.

Switching over to the Secrets menu, we find a few enticing little treats:

Again, the hardcore Horizon fans will really dig the deleted footage. On clip #3, Anderson offers a very clear explanation between the various "cuts" of the film, which I found pretty interesting.

Under the heading of The Unseen Event Horizon we find The Un-Filmed Rescue Scene (2:46), which is a storyboard sequence of an early prologue, and a nifty little slide show (3:44) of Conceptual Art. Both of these featurettes come with Anderson commentary.

And just when I thought the DVD was winding down, I clicked on the heading called The Point of No Return. The Revolving Corridor (1:51), The Crew Gathers (1:13), Shooting Wire Work (1:35), and The Dark Inside (3:26) are a bunch of on-set video snippets, complete with (you guessed it) Paul Anderson commentary.

Rounding out the rather packed 2-disc set are the original theatrical trailer (2:17) and a video trailer (1:46) for Event Horizon. 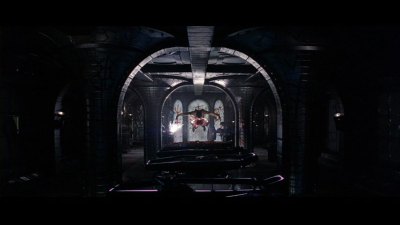 Horizon fans have been eagerly awaiting a double-dip DVD release for quite a few years now. While this 2-disc Special Edition might not be the Director's Cut we were all hoping for, there's little denying that Paramount's put together an excellent little release here.

(Portions of this review have been reprinted from an eFilmCritic review I wrote about six years ago. I like to think ahead.)