Rhino // Unrated // May 16, 2006
List Price: $59.95 [Buy now and save at Amazon]
Review by Adam Tyner | posted April 23, 2006 | E-mail the Author
Mystery Science Theater 3000! Robots, mad scientists, schlocky movies, Video Toaster-fueled silhouettes, pop-culture-peppered riffing...and if you have no clue what I'm rambling on about, you probably shouldn't have clicked into a review of something with "volume 9" in the title. Read one of the other reviews if you want a better idea of what the show's about, but as for established, endlessly loyal MST3K fans, you already know you're buying this, so I'll rattle off a list of the movies and make you feel warm and fuzzy about your pre-order. This, the twenty-something-ish MST3K release to date on DVD, collects four feature-length episodes that tackle pretty much every era from the series' decade-long run on basic cable.

Women of the Prehistoric Planet (1966)

Hi-keeba! The title's a little (okay, a lot) misleading since most 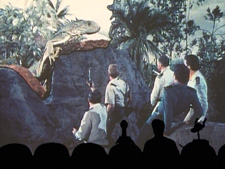 of the movie doesn't have "women" so much as "woman", and our leading lady doesn't even hail from a prehistoric planet. Anyway, in a space-time of space-racial upheaval, a group of oppressed Centaurians overtake a spaceship and crash on a hostile planet of giant iguanas and bounding spider-thingies. Another ship sets out to rescue them, but even though the trip only took three months for our intrepid heroes in space, nearly two full decades have passed on this savage world. Their rescuers arrive to find everyone long-dead, and Linda is taken under the wing of the broken-English-speaking, monkey-enchanting-flute-playing Tang, who's not a delicious breakfast drink so much as a fellow Centaurian whose freeze-dried family crash-landed on this planet many years ago. Volcanoes, ridiculous special effects, well-placed logs, and non-stop action (!) quickly follow.

Women of the Prehistoric Planet is from the series' inaugural season, back in those dark days before TV's Frank reared his well-coiffed head. Best Brains has been vocal about not being particularly fond of the first season of MST3K, which was rarely rerun on Comedy Central, and The Crawling Hand is the only other episode from that year to make its way to DVD. The pacing of the riffs is different in this episode than what fans are probably used to hearing. It almost seems as if the movie's the star, and Joel and the 'bots are just a spoonful of sugar that helps the medicine go down in a most delightful way...there to keep the movie from getting too tedious. The riffing's funny, but not in a grabs-you-squarely-by-the-ears-and-is-arresting kind of way. 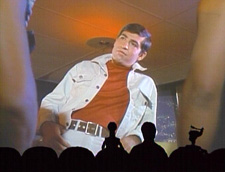 and leave a fat, bloated, ugly corpse." Rod Tillman can't step foot into a stock car without it flipping over and bursting into flames, but his parade of failure is the Satan's Angels' gain. The awkwardly articulate Jeeter, passed-around dutchie Linda, Banjo, and Fats rob and kill for kicks, baby...for kicks...but the fuzz is hep to the sound of their bikes rolling into town, so they could use a good wheelman. They settle for Rod anyway, but little do they know. I mean, little do they know that Rod has teamed up with the cops, and they're lookin' to put the squeeze on the Angels in Citrusville, with Rod ready to heroically flash his lights if ever the need should arise.

The writing's a little more sure-footed than ...Prehistoric Planet, and I think "sure-footed" is not a phrase I'm making up, so there's more of a steady stream of riffs with a beefier hit-to-miss ratio than the previous DVD in this set. The "Wild Rebels" cereal commercial, which the Amazing Colossal Episode Guide says was cobbled together around ten minutes before the first read-through, is still one of my all-time favorite host segments. The episode's also a little more Gypsy-centric, and she even pokes her head into the theater briefly if you catalog that sorta thing. The lazy summary would be "good!" or maybe a "B+" or something.

Don't delude yourself into thinking that pornography is something healthy, 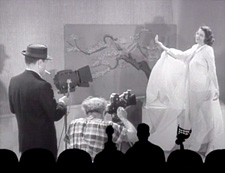 normal people can enjoy in the privacy of their own homes. No! Smut corrupts more corruptively than even the dread marihuana leaf, and this torn-from-the-headlines drama from Ed Wood, compiled in part from a couple of completely different movies he never got around to finishing, documents everything you've come to expect from porn: murder, mob ties, racy footage of fully-dressed, immobile, oddly plump young women, and a brawl at a pizza joint. Saying that The Sinister Urge is about a police investigation into a series of murders revolving around a smut ring is like saying The Godfather is about an olive oil importer who doesn't like drugs, but I only have so much space for these summaries. Sorry.

This episode flashes the set forward to halfway-ish through season six during Mike's reign on Comedy Central, and The Sinister Urge is by far my favorite episode on this set and probably my favorite on the past few collections, period. It's a cavalcade of hee-larious riffs, and the host segments, with Frank brilliantly spoofing the figuratively-moustache-twirling badniks from every overblown action movie of the then-past-ten years and the 'bots parading around as ineffective cops trying to solve the not-a-mystery, all get shiny gold stars. This experiment opens with "Keeping Clean and Neat", which you might remember as part of "Shorts, Vol. 2" on collection numero three-o.

Another movie that really doesn't live up to its 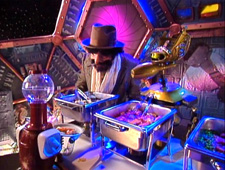 title, The Incredibly Strange Creatures... (heretoforth known as TISCWSLABMUZ, or phonetically, TISC-wizz-lah-buh-muhz) doesn't have any strange creatures and only a few minutes worth of zombies. Most of it's about strippers, oily gypsies, hypnotized murderers, and way too many terrible song-'n-dance numbers. I think there might be a story in there, but the Edison-Laboratory-wax-cylinder-fidelity of the dialogue makes it kinda hard to tell for sure.

TISCWSLABMUZ seems to be one of the more popular episodes of the series, and it was one of the top-ranking episodes on The Satellite News' fan poll a little while back. MST3K has always been able to make ineptly-made dreck watchable, but it has a tougher time salvaging "boring", at least for me, and TISCWSLABMUZ teeters on being Monster A-Go-Go-grade dull. The movie's unwatchable, few of the quips got much of a laugh, and like a lot of the Sci-Fi run, most of the host segments are awfully bland. Not agonizing or anything, but it's the kind of episode where I'd periodically forget I was watching something. Still, Ortega is the new Torgo! Everyone else likes this episode, though, so you're probably better off ignoring me.

Pretend I wrote some incredibly insightful summary...maybe some kind of sports analogy using terms like "slam dunk", "home run", "scorecard", or "shirling"?...explaining why you should buy this ninth MST3K collection. Because you should. Unless you don't like MST3K. And that would confuse me 'cause you're really, really far into this review otherwise.

Video: These four episodes (full-frame, just as they originally aired) look strikingly similar to every other episode released so far on DVD, so you can probably mash the Page Down key now. Mystery Science Theater 3000 wasn't shot with bleeding-edge video equipment, and the movies are culled from low-resolution video sources transferred from battered prints. No one tunes into MST3K for the definitive presentations of a schlocky movie, so...yeah, the prints aren't in great shape, colors are washed out, black levels are anemic, they're soft, grainy, and...that's kind of part of the fun. The host segments look better, of course, although they really weren't meant to be splashed across a 72" HDTV or anything. These DVDs aren't dramatically different from the way these episodes looked on cable, but I can't really imagine 'em ever looking much better than this.

Audio: The riffing always comes through really well, but some of the movies -- murfspfelly drr murftly mrrfled The Incredibly Strange Creatures Who Stopped Living and Became Mixed-Up Zombies -- can be a little tough to make out. That's not a problem unique to the DVDs or anything, and since 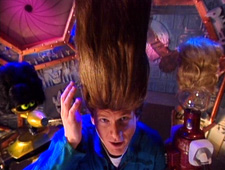 the indiscernable dialogue is the set up for some of the quips, making the soundtracks more listenable would be A Bad Thing™. So, y'know...same as it ever was, he types while making a chopping motion with his arm. The laundry list of audio options begins and ends with the Dolby Digital 2.0 track; there are no alternate soundtracks, no subtitles, and no closed captions.

Supplements: Not much this time around, although it's always nice to see extras that lean more towards the movies than the TV show. Two of the DVDs in this set kick off with a couple minutes' worth of comments from the movies' cast members. First up is the very personable Irene Tsu, who starred as Linda in Women of the Prehistoric Planet. Tsu spends two and a half minutes talking about how fun, quick, 'n cheap the shoot was along with what she's been up to since. The Sinister Urge opens with Conrad Brooks gabbing about how some of the footage was originally shot for an unfinished project called Rock and Roll Hell and why he's better off as an actor than a stunt man. The whole thing runs around three minutes.

Each disc sports a set of lightly-animated 4x3 menus, and the episodes are divided up into twenty or so chapter stops a piece. I didn't get a chance to look at the packaging for this set, but it's probably a safe bet that it's not all that different than the other eight volumes in this collection.

Conclusion: I like it very much. This set covers as many different eras from MST3K's ten season run as you can squeeze out of a four-disc set, cramming together two good episodes, one great one, and another that...everyone seems keen on but me. Another solid collection from Rhino, and if you've picked up the other eight sets, you really didn't need to suffer through this review to figure out that you'll want this one too. Sorry. Anyway, making with the bold-'n-italicized two word summary: Highly Recommended.