Before the Revolution (Italian Release) 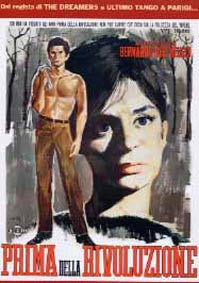 Fabrizio (Francesco Barilli), a young Marxist convinced that Italy is in a dire need of a social revolution, falls for a woman he has known his entire life: his aunt Gina (Adriana Asti). When she arrives in Parma the two quickly begin a love affair where nothing is simple – their beliefs often collide, their love is doomed, their lives are heading in different directions. Fabrizio is also engaged with the beautiful Clelia (Cristina Pariest) whose family is impatiently counting the days until their wedding. Torn between his passion for Gina and a promise he's given to Clelia the young Marxist from Parma must make the most difficult decision of his life.

Beautifully photographed by Italian maestro Bernardo Bertolucci Prima della Rivoluzione a.k.a Before the Revolution (1964) is a web of personal memories brought to life with an impressive aplomb. Infused with the anger of a generation that felt trapped into the machinations of a political elite too concerned with its own well-being Before the Revolution was also a cry for recognition. The social overtones behind this seemingly straightforward story about a man facing a difficult decision established Bernardo Bertolucci as one of the most outspoken directors of his time.

Before the Revolution however is not a film where political demagogy overshadows everything else the maestro attempted to reveal. On the contrary this is a tale of harsh, often intentionally exaggerated, contrasts where love is mixed with anger, passion is countered with confusion, and right is substituted with wrong. In fact, it quickly becomes obvious that part of the confusion raging in Fabrizio's soul was a truthful reflection of a society where religious and "progressive" forces were unable to coexist in peace. Yet, it was all told as a simple story about love, doomed from the very beginning.

Drawing inspiration from Stendhal's The Charterhouse of Parma Bernardo Bertolucci's film also exhibits some quite unusual qualities, certainly as far as Italian cinema from the early 60's is concerned, that one is more likely to encounter in the works of the Nouvelle Vague directors where experimenting with different camera angles was practically worshipped. The unusual camera moves (take notice of the scene where Fabrizio enjoys the acrobatic performance of his young friend), the almost dreamy vistas from a provincial city where nothing ever happens, and of course the manner in which Gina and Clelia are filmed suggest that Bernardo Bertolucci was searching for a style which had to be impressive as well as capable of delivering his radical ideas. As a result Before the Revolution became one of the most conflicting works the maestro created often criticized for its too complicated, even flawed, structure.

Regardless of its suggestive title Before the Revolution never quite established the sense of social urgency Bernardo Bertolucci would channel through his 1968 effort Il Sosia a.k.a Partner. The endless monologs charged with revolutionary overtones that Pierre Clementi will recite in Il Sosia were practically non-existent in Before the Revolution. Instead, the identity crisis which Fabrizio was undergoing appeared as a sub-product of his strong desire to remain faithful to the two women he loved. Slow, but particularly effective, the narrative of Before the Revolution provided only a glimpse of the direction Bernardo Bertolucci would later on explore in Amore e Rabbia (1969).

Described by its creator as an "art monolog" Before the Revolution remains amongst the maestro's most personal films. Beautiful, lyrical, suggesting a style direction that Azzurri cinema will heavily explore through the works of Marco Bellocchio, Pier Paolo Pasolini, Edoardo Bruno, and Antonio Pietrangeli this is classic Cinema Italiana at its best!

Presented in its original aspect ratio of 1.85:1 and enhanced for widescreen TV's Before the Revolution has undergone substantial restoration and the results are stunning! With an exceptional degree of detail, spectacular contrast, a flawless progressive transfer, no print damage, and an image that sparkles with its beautiful black and white gradation this DVD presentation by RHV is without a doubt a collector's dream. I can hardly think what else the Italian distribs could have improved on this presentation as just about every aspect that is typically scrutinized by film buffs has been treated with enormous care. Quite frankly this is as good as this film has ever looked. Region 2, PAL.

Presented with its original Italian Mono track and a newly created active 5.1 mix Before the Revolution sounds exceptionally well. The mono track has undergone the same massive restoration as the print has and it truly shows how much care RHV have spared for this DVD. The audio is crisp and crystal clear elevating the spectacular score by E. Morricone to another level. Indeed, this truly is a magnificent audio presentation. With optional white (perfect font) English and Italian subtitles.

There have been some heavy speculations that Criterion might release Before the Revolution as part of their collection and I most certainly hope that this is not just a rumor started by those who like to play with possibilities. With this said however unless such release materializes with a lengthy commentary by the director of the film sharing his thoughts and memories I believe that English-speakers need not wait for a better release. Why? I can hardly see how this all-English friendly DVD could be topped by anything the R1 distribs may or may not release. Indeed, ALL of the extras on this double DVD set have been subbed in English:

On disc one you would fine the theatrical trailer for the film as well as a nicely done gallery of stills. There is also the short "Cinema D'Oggi" extract where Bernardo Bertolucci comments on the film while selected footage is being shown. Next, there is the "Effetti Personali" segment where selected dialogs and lines are being recited by the cast (approx. twenty years later) throughout locations from Before the Revolution with the original footage from the film being inserted as well.

On disc two you will find the remaining extras from this spectacular release. First there is a short segment titled "Traveling Companions" where Enzo Siciliano, and Adriano Apra are being interviewed. Much of what is being said is recollections pertaining to film's history so there is plenty that fans of Bertolucci will find intriguing. Next, there is a massive interview with Bernardo Bertolucci where he goes into great detail talking about his film and practically touching upon just about all that one might be curious about (I consider this to be the strongest extra from the DVD as I am most certain if a R1 release actually happens it is likely that RHV will not license it). "Gina and Fabrizio" is the next interview provided for this release where Adriana Asti and Francesco Barilli share their thoughts on the roles they were given in Before the Revolution. Unlike the previous interview with Bernardo Bertolucci however I was not as impressed as I thought I would be. "The Workshop of the Young Masters" provides another set of interviews with Ennio Morricone, Roberto Perpignani, and Vittorio Storaro where they discuss their involvement with the film. Morricone's comments were particularly interesting given his enormous reputation between Italian film directors. Next, we have "Re-Readings" with Francesco Casetti, Lucilla Albano, and Giovanna Grignaffini where everyone once again shares their thoughts and recollections on Before the Revolution while highlighting their involvement with the film. Next, there is the "After the Revolution" segment where directors Marco Tullio Giordana (The Best of Youth) and Marco Bellocchio talk about the impact Bernardo Bertolucci and his film had on Italian cinema. Last but not least we have a special documentary that follows the restoration process of this film while highlighting the success which the producers were able to achieve spending thousands and thousands of hours working for the best possible quality.

Quite frankly this is the most spectacular R2 presentation of an Italian film I have ever seen!! RHV truly have delivered a package that is without a doubt the definitive version of Before the Revolution (both in terms of technical presentation and in terms of supplemental material). I would go on record here and reconfirm my opinion that a Criterion release will NOT surpass the wealth of extras as well as the stunning audio/video restoration work the Italian distribs have provided. Unless somehow Criterion manage to convince Bertolucci to record a commentary for this film (and I wonder what else he could contribute as practically ALL he has to say could be found in his interviews provided for this double Italian set) there is no reason for you to wait!! This is one of the all-time BEST R2 English-friendly releases I have seen, all cinema considered: DVDTALK Collector's Series.