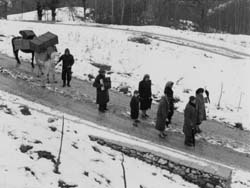 The third and last installment from the recently initiated by New Star-Greece collection of Theo Angelopoulos films, O, Thiassos a.k.a The Traveling Players (1975), provides a glimpse at the director's early period when he was still relatively unknown to audiences across the ocean. The film, a monumental 222 min. saga, covering the turbulent history of Greece from 1939 to 1952, is indeed a very complicated work which strives to retell the country's odyssey through Fascism, Communism, and consequently Democracy.

Filmed as a collage of scenes, some interrelated some only partially sharing common themes, The Traveling Players is an extremely moody, slow, and utterly demanding film that may prove too much for those unfamiliar with the history of Greece. Following a group of players wandering through the remote towns and villages of the country while political events unfold Theo Angelopoulos has created a panorama of images which more often than not are left without any substantial dialog. In fact, for a long time the little dialog the actors spare occurs when they prepare to recite their parts to curious visitors and soldiers crossing their path.

There is something uncharacteristically beautiful about the manner in which The Traveling Players is being filmed. The colorful mosaic of images which Theo Angelopoulos reveals, from the beautiful Mediterranean vistas to the remote villages nestled in the Greek mountains, is something that will make an indelible impression on you. Tradition, Greek history, politics, it is all intertwined in The Traveling Players creating an atmosphere that matches the best created by Tarkovsky, Bergman, and Fellini.

The story of The Traveling Players is so monumentally complex that it prevents nearly any writer from accurately describing what occurs on the screen. From armed conflicts between fascists and communist, to clashes between Greek royalists and workers, to the communist ideology growing roots in the Mediterranean nation this is an eye-opening film which is as ambitious piece of a work as I have ever seen. More importantly, it is mind boggling that Theo Angelopoulos was allowed to film his story as The Traveling Players was completed at a time when the Greek military was most successfully conducting a coup d'etat preventing the Soviet guided communist movement from taking over the country.

Together with its impressive imagery The Traveling Players also offers some highly flawed composition (most notably the balance between acting and improvisation). There are some very particular scenes in the film where actors recite their lines in a manner that feels a bit too static, even artificial. The parallels which Theo Angelopoulos attempts to draw between the traditional Greek texts and the "history" happening in front of the players are visibly exaggerated providing an unnecessary heavy feel. During such moments The Traveling Players comes to a complete stop relying only on the patience of its audience.

So, why is it then that The Traveling Players is often regarded as one of the most stylishly composed films where form and narrative have achieved the perfect symbiosis? The correct answer most probably lays in Theo Angelopoulos' ability to evoke beauty which only literature can properly describe yet infuse plenty of meaning in his work to fascinate the thinking viewer. The result...a refined and mesmerizing cinema which only a few modern directors that I can recall have been able to master.

Winner of the FIPRESCI AWARD at the Cannes Film Festival, 1975; winner of the Interfilm Award the Berlin International Film Festival; Nominated for the Award of the Japanese Film Academy (Best Foreign Film), 1980.

Presented in its original aspect ratio of 1.33:1 the print for The Traveling Players has been granted the same amount of meticulous restoration and proper care the other two titles released by New Star-Greece have received. Personally supervised by Theo Angelopoulos the print is in extremely good condition revealing a healthy dose of film grain, excellent degree of contrast, excellent progressive treatment, steady colors (impressive color gradation), and no damage that I could spot. I have never seen (or owned) this film and this is my first exposure to it. All I could say is that I am impressed beyond belief with the amount of work invested into this R2 DVD. Given the notoriously unfriendly character Theo Angelopoulos is associated with I can only imagine what must have taken the Greek producers to get him personally involved. Needless to say the results are spectacular and I can not wait for the next batch of titles. Region 2, PAL.

Much like the spectacular video restoration Traveling Players has received a proper audio restoration as well. The Mono Greek audio is crisp and clear and the (sporadic) dialog easy to follow. I could hardly notice any serious issues with the audio treatment and as far as I am concerned the film has received the best possible treatment, period!! With optional French and English subtitles.

As it is the case with each one of the newly-released Theo Angelopoulos films there are no extras to be found.

The last release from the first three Theo Angelopoulos DVDs (the other two were also reviewed by DVDTALK) has received an equally impressive treatment. Greek distribs New Star have also announced plans for releasing the rest of the director's films and I can hardly wait (Eternity and a Day should be spectacular especially given the fact that a new print was just released in Australia). The sooner the second batch of titles arrives the better! As to the film and its importance suffice to say Theo Angelopoulos is one of the few remaining masters of cinema whose work should grace the collection of every cinephile. It is that simple!! HIGHLY RECOMMENDED.