There have been a couple of anime versions of Kousuke Fujishima's long-running manga series, Ah! My Goddess. While I had read a good many of the comics and seen the 2001 movie version, We've Got Tonight was my first exposure to the television show. As the fourth volume of a series, I found it pretty accessible. At this point, the characters are settled into their places, and it doesn't take long to understand how they relate to one another. Plus, since there is no great over-reaching plot carrying through from episode to episode, each of the four shows presented here can be enjoyed on its own merits.

The basic rundown of Ah! My Goddess is pretty simple: average college student Keiichi Morisato has become the earthly host of Belldandy, a goddess of love and beauty. They attempt to establish a regular domestic household, and Belldandy's two sisters move in with them. Urd is the sexy troublemaker goddess, and Skuld is a young girl with a knack for inventions and an unrestrained jealousy toward anyone who tries to get near Belldandy. Add the goofball friends Keiichi has from school, his own meddling sister, and a vengeful demon who wants Belldandy to go home, sprinkle in Keiichi's inability to admit his undying love to the goddess, and you've got yourself a charming romantic comedy. 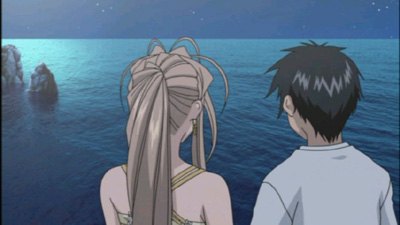 We've Got Tonight has episodes 15-18 of the Ah! My Goddess series.

"#15: Ah! A Heart Stolen by a Goddess?": Skuld builds Banpei, a robot guardian who is meant to help Belldandy around the house while also warding off any demon intruders. Somehow, the little guy develops emotions (he was built as much with magic as technology, after all), and being just like everyone else, he falls in love with Belldandy. Rather than just keeping demons away, Banpei starts keeping everyone away from Belldandy, until he can be taught to feel with more complexity.

"16: Ah! Misfortune Arrives and the Tea Stalk Stands Upright?": The evil Marller possesses Keiichi's sister, Megumi, in order to get close to her nemesis. She then invokes Senbei, a demon of poverty. This flamboyant character's intention is to cause all sorts of bad luck for Keiichi, convincing Belldandy that he is a loser so that she will return to Heaven. Little do the demons realize they have underestimated Belldandy's penchant for kindness. Senbei is an amusing fop of a character, changing accents and linguistic ticks from scene to scene, making this the funniest episode on the DVD.

"17: Ah! What Do Talent and Hard Work Have to Do With It?": Keiichi's racing club has signed up their one female member for an all-girl go-kart race. Only, they didn't take into account that Sora Hasegawa is scared of driving fast. It's up to Keiichi and the goddesses to help her conquer her fears.

"18: Ah! Confess Your Love Under the Moon?": On Megumi's urging, Keiichi takes the girls on a trip to the beach with the hidden agenda of finally telling Belldandy how he feels. Two things get in his way, however--an inability to swim and Skuld's jealousy. With the help of Urd, Keiichi sets up a late-night rendezvous where he can lay it all out for his beloved under the full moon. Skuld's attempts to run interference have, of course, unexpected results. 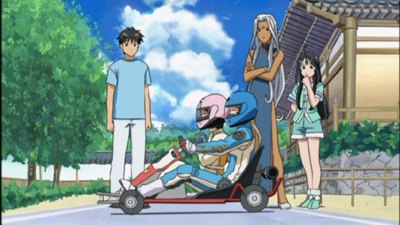 For me, the appeal of Ah! My Goddess is also the element that can turn some viewers off. It's endearingly sweet, and so how much you enjoy the series will depend on your threshold for sugar intake. There is a genuine affection between all the characters that elevates Ah! My Goddess above other series of its kind, and even when it gets cornball, such as when everyone is trying to lend Sora a hand with overcoming her phobias, it's hard not to get into the spirit of it and cheer them on. Thankfully, Urd can sometimes be mean-spirited and Skuld's schemes usually devolve into slapstick, so there is the occasional counterbalance to all the good-natured story lines. Plus, when the shows get romantic, they get really romantic. For all of Keiichi's misgivings at expressing himself, there is no shortage of heartfelt emotion. My inner sap succumbed completey to Keiichi and Belldandy's late night date over the ocean, because don't you understand? If he can just get the words out, it will bind their love forever! 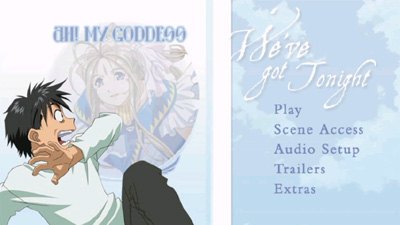 
One thing that really surprised me about Ah! My Goddess is how consistent the animation is. It's clean and pretty throughout all the episodes, with no noticeable dips in quality or cheats. The folks at Anime Works have rewarded this quality with a vibrant, 1.85:1 anamorphic widescreen transfer. There's a lot to look at here, since each goddess has her own color scheme, and so it's nice to see that they are all as lovely as they ought to be.

Sound:
As can be expected, Ah! My Goddess has both the original language track and an English dub, depending on your preference. Each is presented in a 2.0 mix. The sound is nicely done, with all the elements differentiated clearly.

Extras:
There isn't much by way of special features on this disc: a version of the closing credits without any text, and four trailers of other anime series, none of which seem geared for the Ah! My Goddess audience.

FINAL THOUGHTS:
Recommended. Ah! My Goddess is one of the finer anime series currently running, with consistently entertaining plots and characters that the viewer grows to genuinely care for. If you have an interest in romantic serials, you can't go wrong with this crew, and the DVD presentation is nicely done, even without a ton of bells and whistles. 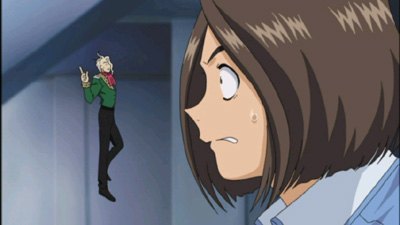