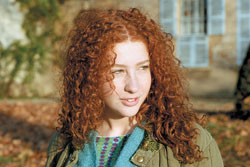 Only 17 Claire (Lola Naymark) is told that very soon she will be a mother. Uncertain about her future and afraid to share the news with the few people she spends time with Claire befriends an older lady (Ariane Ascaride) whose son has died in a tragic accident. The two women, both carrying plenty of sorrow in their hearts, will spend long hours looking for solace while broidering beautiful dresses. Unsuspecting how close they have become Claire and Madame Melikian will realize that it is never too late to rediscover hope.

An exquisitely crafted tale about a girl who has become a woman too quickly leaving behind all that girls her age enjoy Brodeusses a.k.a Sequins (2004) is a simple film that manages to remain as modest as possible. With newcomer star Lola Naymark and her wild red hair director Eleonore Faucher has discovered a tiny jewel which I am sure film critics will have plenty to say in the future. The girl's acting is so convincing that I could not stop drawing parallels with Pawel Pawlikowski's My Summer of Love (2004). Only Sequins is much, much better.

Sequins is also quite a different film. While the two girls in My Summer of Love also felt isolated and consequently found solace in each other in Sequins Claire is left alone. Even when she befriends the emotionally devastated Madame Melikian who once worked for famous designer Christian Lacroix Claire remains visibly reserved. She seeks Madame Melikian's friendship but the older lady is unable to respond with the tact a mature woman should. On the contrary, surprising us all, it is Claire who reveals a more stable and consequently stronger personality allowing Madame Melikian to get back on her feet.

I could not stop thinking that only a woman can film such a delicate and sensual film as Sequins. I am willing to consider different opinions but I very much doubt it that a man would capture this well what goes on in the soul of a girl who all of a sudden must face the consequences of her actions, something that a woman will know better how to address. The sea of emotions that we see in Claire's deep eyes, her childish smile, and her unusually strong spirit transform this film into one of the most sensual and touching stories I have seen in recent French cinema.

Aside from the exceptionally strong acting Sequins also benefits from an intoxicatingly beautiful soundtrack, simple yet very powerful, by the man who scripted the music for Kar Wai Wong's In the Mood for Love (2000) – Michael Galasso. With violin solos that enhance just about every aspect of Sequins this film is indeed one utterly sensual experience that should appeal to viewers who appreciate exquisite cinema.

I have very little to add to what both critics and audiences have already said about Eleonore Faucher's latest film. The Grand Prix Award which Sequins took during the Critics Week at the Cannes Film Festival (2004) is most deserved and I am now happy to own this film in my collection. Everything that I love about cinema is in Sequins: sensual camera work, refined (and I am shocked by the brilliance of Lola Neymark's acting) performances, great story, and a flawless soundtrack. Quite a chef-d'oeuvre indeed!!

Presented in its original aspect ratio of 1.85:1 and enhanced for widescreen TV's the film appears to have been mastered from a secondary PAL print thus there is some "ghosting" present. This put aside however the DVD offers one exceptionally good looking print: colors are very strong (the prevailing yellowish tint has been preserved), contrast is at a very satisfactory level, detail is great, and there was no print damage that I could spot. So, I have very strong suspicions that New Yorker have used the same print Soda Pictures-UK did which was actually a port of the earlier released French DVD. With other words this could have been a perfect package had New Yorker transferred the print properly.

Presented with its original French 2.0 track (this is indeed the desired by the director audio option) the film sounds very well. The music is extremely well mixed and the long moments of silence treated with the proper care. There are no annoying pop-ups or other detrimental issues that I could spot. In French with optional yellow English subtitles.

There are only a few extras on this DVD: two rather prolonged deleted scenes with optional English subtitles (both of those are related to a practice test), a reading of script lines in front of an audience (Ariane Ascaride), and the original French trailer. In addition, there is a lovely booklet that comes with this DVD in which New Yorker have provided a great interview with the director of the film Eleonore Faucher in which she touches upon different aspects of the story, the manner in which the film was shot, and how the story behind Sequins became a reality. Excellent!!

I enjoyed every bit of this sensual little film!! In fact, I would go on record and say that since the beginning of the year this is my favorite film. Too bad that New Yorker once again opted for a cheaper PAL master. I would have most certainly given this DVD the Collector's Series mark but as it is I am going to only HIGHLY RECOMMEND it and assume that you are still using a standard tube and a locked-region 1 player. If not, then there are better options.