Swamped with European immigrants and people looking to try their luck Shanghai is a place full of life. Unfortunately amongst those who have made a good fortune there are also people struggling to make ends meet.

Countess Sofia Belinskya (Natasha Richardson) and her entire family have been forced to leave Russia after the newly established communist regime has begun prosecution of everyone previously associated with the Czar. In Shanghai, the beautiful Russian spends her nights working at a high-class brothel where the city's elite would gather for drinks and "conversations". There Countess Sofia would often meet fellow countrymen who are waiters, garbage-men, or "companions".

One night while with a client Sofia meets an enigmatic blind man who offers to buy her a drink. The blind man is no other than Todd James (Ralph Feinnes) an ex-American diplomat who has grown tired of the political machinations his profession offers. These days Mr. James spends most of his time at places of notable distinction while occasionally allowing himself to frequent other establishments where people truly have fun. Mr. James offers Countess Sofia a position at his soon-to-be-built night club where she will be responsible for keeping an eye at the prestigious clientele. The club is to be named The White Countess. 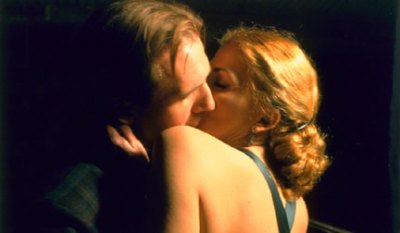 Sofia quickly accepts the offer and begins work at The White Countess. There diplomats, businessmen, and the new elite of Shanghai indulge into a never-ending party of alcohol and beautiful women. But while the nights inside the The White Countess are full of life outside, on the streets of Shanghai, people are concerned. Japan has just announced its plans to revive the old glory of the country and its troops are only hours away from the city.

Advertised as the last project to come out under the pen of the famous Merchant-Ivory team The White Countess is a lush story of romance set amidst the confines of a city on the brink of disaster. Beautifully photographed, with truly exceptional emphasis on period costumes and decors, The White Countess recreates a time of Shanghai's history when the city was flooded with European immigrants, Jews attempting to escape Hitler's regime, as well as those who simply found the place as the new Mecca.

Like so many of James Ivory's previous films The White Countess relies on an exceptionally well-written script where the dialogs are mastered to perfection. Indeed there are very few directors who know how to tell a period story as well as James Ivory and Co. do. The two beautiful characters, Countess Sofia and Todd James, are played flawlessly by the always reliable Natasha Richardson and Ralph Feinnes and the two truly looked at ease with their parts.

The White Countess is an old-fashioned story of romance, one where glamour, sophisticated manners, great music, and lush decors are being glorified, with other words, a piece of cinema that modern directors dare not produce anymore. The film offers the kind of characters that conventional cinema seems to have long forgotten – men reveal plenty of tact when they communicate their feelings to women, and women in return seem to be equally receptive to those who treat them right. Quite frankly, The White Countess is truly in a class of its own. 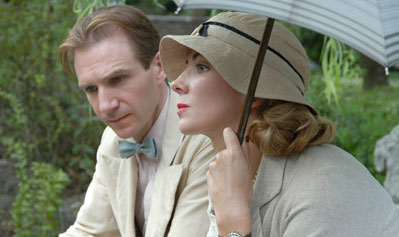 All these years the Merchant-Ivory team has been delivering film after film of pure bliss to those who treasure their old-fashioned style. It is rather sad to see that their legacy is now completed, particularly considering the fact that no one has emerged to follow up their steps. With a deserving film that should make critics' and viewers' top 10 lists this year The White Countess very much marks the end of an era.

Presented in its original aspect ratio of 1.85:1 and enhanced for widescreen TV's The White Countess looks gorgeous. With lush colors, exceptionally good degree of detail, perfect contrast, plenty of film grain during the night scenes (all natural), and lack of any disturbing edge enhancement this print is a pleasure to behold. SONY have really been treating many of their recent releases with the proper amount of care and this R1 DVD is not an exception. I was particularly impressed by the fine color gradation and the fact that the print remains as solid as possible when blown out through a digital projection. In addition, there is not a single spec or dust that I could spot on this print and I am truly happy to be able to have this film in such a perfect condition. As far as I am concerned there should be absolutely nothing holding you back from owning a copy of this film.

Presented with its English Dolby Digital 5.1 track and optional yellow English and French subtitles the audio treatment is equally impressive. A crisp and crystal clear sound mix transforms the lush music from the film into quite the experience! With this said there are no defects that I could hear with the audio presentation: an all around solid job indeed. However, I once again have to raise my concern with the rather large subtitles font and the fact that the subs are indeed in yellow. Is it really this difficult to correct the size of the font (I find it very annoying that SONY continue to use such large lettering)??

There are also a good number of extras on this DVD which SONY have provided. First, there is a commentary with the director of the film James Ivory and Natasha Richardson where the two go into great detail describing specific scenes from the film as well as providing much additional information about this final project. Unlike other commentaries that often tend to be dry this one truly is an exceptional one (maybe because of my bias but I did enjoy Natasha's thoughts quite a bit). Next, there is a "Behind The Scenes" featurette which pretty much follows the standard formula used by such supplemental material: bits of the shooting, an insider look or two, as well as plenty of attention spared for the cast of the film. Next, we have a gorgeous yet rather short "Tribute to Ismail Merchant" where we have summary of his career as a director as well as some notable highlights from his film legacy. Last but not least we have another "Making of" which again provides an additional look at the shooting of The White Countess, the beautiful sets and costumes, and of course the exotic locations.

If this turns out to be the last film to come out under the Merchant-Ivory logo, as announced, this is indeed a sad, very sad day. Their talent will be missed!! I did enjoy every single minute of The White Countess and all things considered will have the film as one of my top 10 picks at the end of the year. HIGHLY RECOMMENDED.