Red and the White (UK Release), The 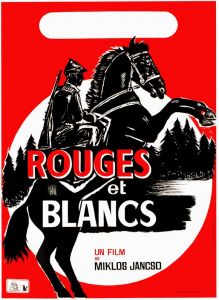 Somewhere along the banks of the Great Volga River the Reds are slowly but surely taking over the scattered Whites. Assisted by hundreds of Hungarian volunteers who have crossed the border hoping that a defeat of the Czarist supporters would spur a revolution in their own country the Reds are meticulously annihilating the Whites. But the remaining Cossack hordes are just as merciless as the Reds are – they would trap, capture, and execute those who sympathize the Reds. In a deadly game of survival the two sides will fire at each other until there is no one left alive.

Shot in glorious Cinemascope Csillagosok, katonak a.k.a The Red and the White (1968) is a film of rich history. A Soviet-Hungarian co-production directed by one of the most respected and well-known Eastern European filmmakers, Miklos Jancso, the film is a brutal depiction of a conflict that not only affected an entire country but also shaped the political future of a region that for years to come remained isolated. Stunned by the suggestive nature of Jancso's work Soviet officials quickly declared The Red and the White persona-non-grata and the film was shelved amidst thousands of other pictures the apparatchiks deemed unhealthy for mass consumption.

It is virtually impossible to describe how the story evolves in The Red and the White. Unlike most of the films created in Eastern Europe during the 1960s where political propaganda and straightforward characters were the norm this was a strange production where well-known clichés were abandoned in favor of a visually striking story with no main protagonists whatsoever. In The Red and the White the only motif connecting the different parts of the film is violence.

The madness and cruelty of war are so realistically recreated by Jancso's camera that the action in The Red and the White can be wrongfully considered as cheap exploitation. A monastery is taken over by the Reds and all of the White sympathizers are quickly executed. Shortly after the Whites invade the area exterminating all of the Red sympathizers sparing only a few of the Hungarian volunteers lamenting "this is our war, go home now!" The piles of bodies we see in The Red and the White are as disturbing of a view as you will ever see in cinema.

As other film critics have noted The Red and the White is a film that feeds off nihilism. Why? The unceremonious manner in which human beings are killed is justified with some strange words about honor, country, and freedom. Furthermore, the film hardly takes a breather from the massive onslaughts in which the two conflicting sides exterminate each other. Yet, the poetic beauty of The Red and the White is something I have witnessed only in Sergei Gerasimov six-hour saga Tikhiy Don (1957). Indeed, Jancso's language is bold, intentionally cruel, yet uncharacteristically elegant.

I often look at the cinema of post-war Eastern Europe with a sense of nostalgia. Not because I long for the cheap idealism and faulty politics of those who placed the region in a state of never-ending misery, rather I am fascinated how directors managed to create a culture, even a language if you will, through which they were able to express artistic ideas in a most unique manner.

Krzysztof Kieslowski often talked about his generation and how Polish directors managed to outsmart the communist censorship, how audiences were prepared to read between the lines. In a similar manner Miklos Jancso managed to create a legacy of films that spoke loud and clear to audiences around the world elevating him amongst the most notable film directors to ever come out of Hungary.

In 1969 the film won the Critics Award for Best Foreign Film (Hungary-Miklos Jnacso) granted by the French Syndicate of Cinema Critics.

Newly established UK label Second Run quickly gained the admiration of serious film aficionados with their stellar catalog of world films presented in an immaculate fashion. Their latest release of The Red and The White however is a major step backwards from the usual high standards. The print offers plenty of dirt and damage, some rather large burns, and occasionally (3 times to be exact) some noticeably disturbing jitters that will affect your viewing experience. Before everyone makes a quick and unfounded decision that this release is therefore so flawed that potential viewing is practically impossible I think that we should all consider what was actually available to the producers of this UK release: which is not much. Even though the film is presented in the original aspect ratio of 2.35:1 and enhanced for widescreen TV's my understanding is that at lest as far as the UK rights-holder is concerned (Second Run) there was truly very little for them to operate with. Nevertheless I think that one must be honest and point out that while average at best contrast, color gradation, print quality, and detail are most certainly areas of concern. At least for those like myself who have seen what the company is able of providing!!

Recently I also noted that French producers Clavis Films (who also hold the rights for Bela Tarr's works) will be releasing a massive French set containing five of Jancso's films including The Red and the White and I am most curious to see their output. The little preliminary information circulating at French forums and fan sites indicates that these will not be prints that have previously been available to international distribs and one could only hope that perhaps their quality will be substantially better than what Second Run (or KINO) have gotten their hands on. That combined with the fact that Clavis Films' boxset will be English friendly gives me much hope. So, let see!!

In a similar fashion the Russian-Hungarian mono track has me somewhat unimpressed. While there are moments where the sound quality is crisp and clear I also noted that there are specific areas where balance (volume control if you will) is an issue. Yet, I have to force you to consider that perhaps this is what the master-negative allowed Second Run to replicate. Truly we have no idea what the condition of this master print is/was and therefore I can only comment on what I already pointed out above: time has most certainly left its mark on this film. With optional, very well done, English subtitles.

The only extra on this DVD is a little seen documentary series by Jancso titled "Message of Stones- Budapest" which follows the Jewish community in the Hungarian capital. Aside from that what truly made an impression on me is the massive 20-page booklet which the UK distribs have provided containing a lengthy (very large indeed) interview with the Hungarian director.

I am going to recommend this film as I believe that most of you have hardly seen anything like it. This is powerful yet unconventionally raw cinema at its best. Keeping in mind the few technical flaws I noted above (which need to be looked at in the context of the print materials made available to the UK distrib) you will have to decide what is the best course of action here. And...keep in mind that the upcoming French set by Clavis Films will be English friendly. RECOMMENDED.