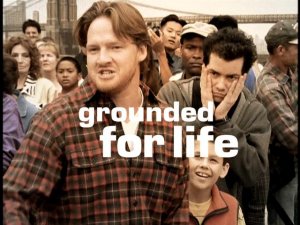 Grounded For Life is a hilarious sitcom that first aired in 2001 and ended a five season run in 2005. Grounded For Life's basic premise is about the life of a Staten Island couple who were pregnant and married at the tender age of eighteen. Now in their thirties with three kids they struggle to be responsible adults and parents. Grounded For Life is an extremely funny sitcom with plenty of absurd situations and goofy characters. For more details about this series please refer to DVD Talk's review of season one.

Like the first season, I had a lot of fun watching season two. The cast continues to be great together and they get into some pretty fun situations. The show's format also continues to be enjoyable. Unlike many other sitcoms, Grounded For Life tells its tale by having the characters recap and retell the events that occurred to put them into their present sticky situation. This season's situations range from young love to cigarette smoking to drugs to holiday fiascos to the mafia and many other absurd and silly circumstances. 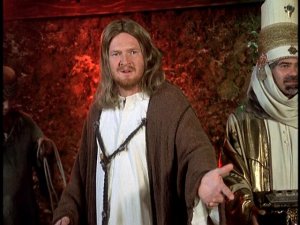 The season's first episode "Don't Let Me Download" was a hilarious way to start the season. Claudia finds pornography on little Jimmy's computer and doesn't react very well. She and Sean sit down with Jimmy to have a talk about the exploitation of women. What Claudia didn't realize was that it was Sean looking at the pictures and not Jimmy. This situation puts Sean in a lot of hot water with her and there are also some fun back stories about Sean and Eddie's childhood dealing with pornography. The next episode "Bang On The Drum" is a silly episode. Sean and Eddie revive their old band with a teenage boy Dean (Mike Vogel). The band was supposed to play at a wedding reception, but it didn't work out too well when Sean realized Lily's interest in Dean was more than plutonic. Dean appears throughout the rest of the season as a love interest for Lily.

"I Saw Daddy Hitting Santa Claus" is an overly silly Christmas tale gone awry. It includes Sean getting beat up by a bunch of Christmas elves after throwing a tomato at Santa Claus. "We Are Family" is another fun episode with the Finnerty's finding out they have a blood connection to the mafia. The Finnerty household goes wild with plumbing problems. After a week of trying to fix it himself, Sean calls on Claudia's uncle Sal (Vincent Pastore), a "contractor", to help. Eventually enough signs appear that lead Sean to believe Sal is a made man. It is a fun episode with both Sean and Eddie overreacting. 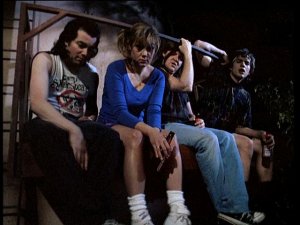 "Don't Fear the Reefer" is a funny episode dealing with drugs. After Sean finds out how expensive it is to have someone trim branches off the tree in his front lawn, he decides to do it himself. While climbing up the tree he sees Lily with a bag of marijuana. It is a serious issue for Sean and Claudia to deal with and gets quite sticky when they find out where Lily found the drugs (in their closest). The other fun part about this episode is a neighborhood blackout Sean caused when cutting the branches off the tree. It brings in a bunch of goofy overplayed jock characters into the house. "Safety Dance" is another episode where Sean and Claudia's misbehavin' past gets Lily into trouble. When Sean and Claudia were in high school they hide a bottle of whiskey in the gymnasium during a school dance. In this episode, they are forced by Sister Helen to volunteer as dance chaperones. The old bottle of whiskey somehow ends up in Lily and Dean's hands.

In "The Kids Are Alright" Sean and Claudia return from a weekend in Atlantic City to find Henry and Jimmy locked in the basement, Walt passed out on the couch, Eddie picking up empty beer bottles, and Lily with a guilty look on her face. The fun in this story comes from unraveling the truth about Eddie's babysitting of the Finnerty kids, as well as how Sean managed to win a bunch of cash at the blackjack tables. "Oops!...I Did It Again" is an episode where Sean believes his reality is going to become Lily's reality when he finds a home pregnancy test in the garbage. This episode includes some flashbacks surrounding Lily's birth and Sean overacting as usual.

Overall I found season two of Grounded For Life to be just as much fun as the first season. The cast continues to be very good together and they get into some riotous situations. Most of all, I am continually amazed with Kevin Corrigan's stunning performance as Eddie. He is a kooky and odd fellow, but there are always laughs surrounding him. If you are looking to laugh, then Grounded For Life: Season Two is worth looking into to. 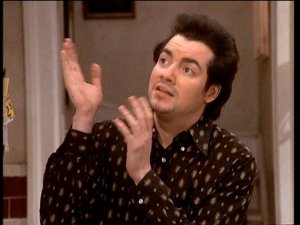 
The DVD
The Grounded For Life: Season Two has seventeen episodes spread across three dual-layered DVDs. The DVDs are stored in two slim pack cases. The slim pack cases are housed in a cardboard box about the same size as a regular DVD case.

Audio:
The audio track is given in English 2.0 Dolby digital stereo sound. The sound quality is good and like most TV on DVD releases, it is dialogue driven and incorporates a laugh track during the funnier moments. The laugh track does not interfere with the audibility of spoken dialogue. As for channel separation, there is very little distinction between left and right channels, but on occasion a sound effect will utilize it. This release has no support for subtitles, but does support English closed captioning.

Extras:
The first item up is an audio commentary for "Smoke On The Daughter" with Bill Martin, Mike Schiff, Lynsey Bartilson, Megyn Price, and Richard Riehle. The commentary is entertaining enough to sit through and it is too bad more weren't included. The first season release came with ten.

The other extras include a variety of featurettes. The first featurette is "From Ashes To Ashton: An Interview With Ashton Kutcher" and it stars Ashton Kutcher. Kutcher guest starred in the episode "Dust In The Wind". In the featurette Kutcher talks about his guest character and the episode he appeared in. "Kevin Corrigan: He Ain't Eddie, He's My Brother" is a featurette with Corrigan talking about his character Eddie and experiences on the show. "Season Two Highlights" is a montage of funny clips from season two. The final featurette is "Sibling Revelry: Interviews with Jake Burbage ('Henry') and Griffin Frazen ('Jimmy')" with the two youngest actors talk about their characters.

Lastly there is fun bloopers reel and trailers for Roseanne and 3rd Rock From the Sun. Overall I thought the extras were entertaining and as I previously mentioned, more commentaries would have been better.

Final Thoughts:
Like season one of Grounded For Life, I found season two to be a blast. The situations the cast gets into are always a lot of fun to watch, especially how each character overacts. I also enjoy the approach the show takes. There are lots of funny vignettes in the form of flashbacks with the cast recounting various events leading up to their present situation. It is a fun approach and handled very well in this show. This set comes recommended.