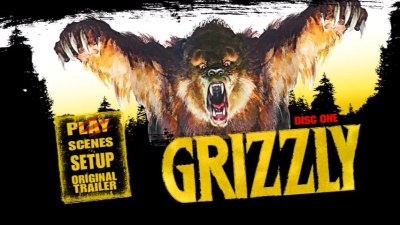 William Girdler's Grizzly is a blatant, obvious, and transparent rip-off of Steven Spielberg's Jaws -- and everybody knows it. From the fans and the non-fans to the surviving cast and crew members, they all plainly acknowledge Grizzly for what it is: An extra-speedy coattail-rider that yielded big profits by hopping on the mid-'70s Killer Animal resurgence that began with one ravenous shark.

I'll spare you the list of Jaws copycats that oozed out of the B-movie machine following the killer shark's killer debut, but Grizzly was one of the first, the silliest, and the most popular. Starring a gang of familiar old faces (Christopher George, Andrew Prine, Richard Jaeckel) and featuring a "15-foot" grizzly bear who loves to snack on campers, Grizzly is a low-budget knock-off turkey ... that's still pretty entertaining today. 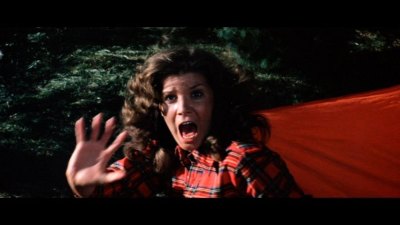 All you need to know is that a rogue grizzly is eating a bunch of people inside of a state park. After a few gruesome chompings occur, a park ranger (George), a goofy helicopter pilot (Prine), and an even-goofier naturalist (Jaeckel) do all they can to track and destroy the ravenous ursine. Unfortunately, the trio is fairly inept, which gives the big bear ample time to play "all you can eat" with the local backpacking brigade. (And for a movie that's rated PG, Grizzly sure packs a half-decent amount of carnage into its 90-some minutes.)

True, the thing looks like it was made on the mega-cheap (because it was), and some of the acting performances are hilariously overripe, but if low-end B-movie fun is what you're after, I say Grizzly delivers the goods. You'll laugh at the movie more often than you'll appreciate its legitimate assets, but there's actually some solid craftsmanship to be found in this goofy little piece of cinematic plagiarism. Girdler's widescreen depictions of a Georgia state park are quite lovely, and he's smart enough to keep the expositional stuff to a minimum while allowing his four-legged star to snack as often as possible.

(OK, one subplot really needs to go: It involves Ranger George and his ninny girlfriend. It's a plot divergence that goes nowhere, and it really jams a few roadblocks in front of one's enjoyment of the hungry bear antics.) 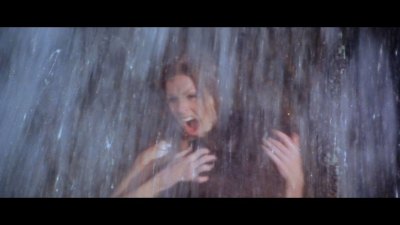 While it's a cheap and chintzy little flick in many respects (and it really is a downright rip-off), Grizzly turned out to be one of 1976's surprise hits, clocking in as the #1 most successful indie of the year. Decades of airplay on The Late Late Show has afforded the grisly flick a "cult movie" cachet that, I must admit, is pretty well-deserved. As a drive-in-level guilty pleasure of the most obvious and brainless variety, Grizzly is quite a bit of good, campy fun. It scared me as a kid, it amused me as an adult, and now it's entertaining me as a 2-disc Special Edition. Gotta love digital nostalgia.

Video: I was warned away from the original DVD release of Grizzly, which was apparently a bare-bones full-screen travesty, but now comes a swanky 2-disc edition from Shriek Show, and those cult-lovin' lunatics have decided to present Grizzly in a stunningly nice anamorphic widescreen (2.35:1) presentation. No, it's not nearly flawless to look at, what with the few source glitches and grungy shadows, but fans of the flick will be more than pleased with this visual upgrade. Frankly I was amazed at how good Grizzly could look. 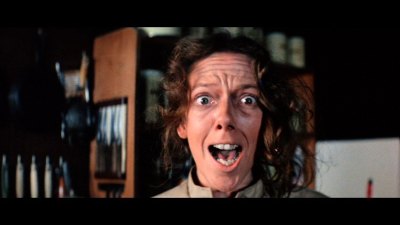 Audio: It's a rather cheery mono presentation, with all its goofy sound effects, incongruously merry musical score, and flat, dry dialogue.

Ah, now here's some fun stuff. Media Blasters / Shriek Show repackages freakin' Grizzly like it's an 8-time Oscar Winner -- much to the delight of old-school horror geeks the world over. 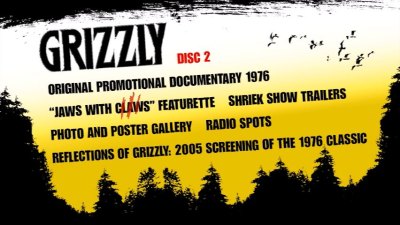 Disc 1 contains a video trailer for Grizzly and a feature-length audio commentary with actress Ruth McCall and co-writer/co-producer/co-director David Sheldon. Moderator Walt Olsen keeps the pair moving along, and their conversations often lead to places the geeks want to visit: talk of deleted scenes, difficult working situations, and aborted sequels is scattered among the more standard "oh, he was a lovely guy ... oooh, it was so cold that night!" chit-chat. Mr. Sheldon exhibits a fair amount of hubris for a guy best known for producing Grizzly and Just Before Dawn, which just makes the commentary that much more entertaining. (He actually tries deny the Jaws influence and goes on to imply that Grizzly somehow inspired ... Halloween.)

There's an original 1976 promotional documentary that runs about eight minutes and is of very questionable visual quality, but it's pretty interesting as a "b-movie relic" piece. The all-new Jaws With Claws: A Look Back at Grizzly featurette (36:37) is a tongue-in-cheek retrospective piece that celebrates the flick while not taking it all that seriously. Interview subjects include writer/producers David Sheldon & Harvey Flaxman and actors Andrew Prine & Joan McCall. Topics of conversation include production, the bear, cast & crew, theatrical distribution, the "rip-off" angle, and the flick's cult following. This impressively mounted fan piece also includes a fascinating lawsuit story and just a little more info on the legendarily "missing" Grizzly sequel.

Reflections of Grizzly is a 5-minute visit to a late-night geek-screening of the flick in L.A., and it's pretty amusing to hear the old fans' reactions.

Also included: a photo & poster gallery, a pair of radio spots, and some trailers for Just Before Dawn, Shadow, One Dark Night, and Anthropophagus. 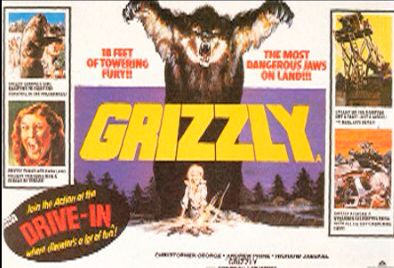 Jaws is to Grizzly what Filet Mignon is to The Whopper ... but there's nothing wrong with some cinematic fast food from time to time. If you're a big fan of this particular culty, campy, cheesy, angry-bear classic, please do consider this generous DVD package Highly Recommended.

Everyone else should consider it a bong-night rental, at best.