Horseman on the Roof (UK release), The 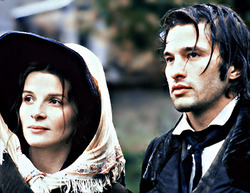 A little bit of history…

If you ever wanted to know how bad studio censorship in America is look no further than Jean-Paul Rappeneau's epic picture Le Hussard sur le Toit a.k.a The Horseman on the Roof (1995). Distributed by US juggernaut Miramax, who Asian cinema fans have a great deal of "respect" for, the domestic release for this film was unceremoniously cut from its original European 136 min. print to a snubbing 118 min. mess which the studio execs approved as healthy enough for mass consumption. With a film that is so visually striking and simply beautiful to behold the new "version" was a disgrace of paramount proportions. It is hard to believe that certain people had the guts to actually put their company logo on the release and claim that this was something Jean-Paul Rappeneau created.

But it wasn't enough!! Now that The Horseman on the Roof was chopped in tiny pieces by Miramax the studio also decided to color-manipulate their print. Vastly inferior to the original color scheme the North American release of The Horseman on the Roof was also quickly granted a non-anamorphic transfer which provided the last nail in the coffin of this most stylish film. Ridiculous!!!

Evoking comparisons with such grand spectacles as Christian-Jaque's Fanfan La Tulipe (1952) and Andre Hunebelle's Le Bossu (1960) Jean-Paul Rappeneau's The Horseman on the Roof tells the story of an Italian patriot living in neighboring France. With the Austrian Empire holding in its iron fist the Northern Italian provinces Angelo Pardi (Olivier Martinez), a young colonel in the Hussars, and his comrades are dreaming of a revolution that would push the Austrian tyrants away from Italy. Aware of their revolutionary deeds the Austrian secret police dispatches a number of killers who must track down and eliminate the living in France Italian patriots.

With the Austrian police already in Aix Angelo quickly gathers his belongings and runs away eager to inform the Italian exiles located in the vicinity of Manosque. As he rides through the French countryside Angelo is stunned by a disastrous scene – a cholera epidemic claiming entire villages.

Away from Aix the young Hussar stumbles upon Pauline de Théus (Juliette Binoche), a beautiful lady who has chosen to remain in her family house despite an official decree urging villagers to abandon their homes. Angelo takes shelter in Pauline's house and consequently the two leave together. As they ride through the French countryside Angelo and Pauline fall madly in love.

A classic tale of romance told amidst the horrors of a deadly disease The Horseman on the Roof is a film as equally impressive as Jean-Paul Rappeneau's earlier Cyrano De Bergerac (1990). With a superb script, breathtaking visuals, and a cast that seemed destined for each other this is a story that offered all of the ingredients classic films typically reveal. In fact, the character which Juliette Binoche played in The Horseman on the Roof is certainly amongst one of her most enigmatic roles - a shy countess who gradually falls for a handsome Hussar yet desperately attempts to follow the path of decency.

The Horseman on the Roof also solidified the career of heartthrob Olivier Martinez whose looks are certainly more impressive than his acting. As he managed to get himself involved in some quite notable projects (The Chambermaid of the Titanic, Before Night Falls) Olivier Martinez also saw his career take a rapid plunge with such turkeys as the now notorious Semana Santa (film students should take a look at this production and learn how bad cinema could be) and the dreaded highly-decorated by MTV stinker S.W.A.T. Fortunately enough the Frenchman was able to team up with Dianne Lane and have at least one stateside success in the remake of Claude Chabrol's classic story about a woman on the path of seduction (La Femme Infidele / Unfaithful).

It remains an undisputable fact however that what Jean-Paul Rappeneau was able to create is the type of cinema nowadays directors are either no longer capable of directing (perhaps talent is indeed a rarity) or classic stories of romance and adventure have lost their appeal amongst audiences around the world. I tend to side with the former – there are truly very few directors these days that dare step behind the camera and film a story without relying on the latest CGI gig. What a sad reality!

In 1996 the film won the Cesar Award for Best Cinematography (Thierry Arbogast) and Best Sound (Pierre Gamet) as well as the Silver Ribbon Award (Best Costume Design) granted by the Italian National Syndicate of Film Journalists.

Presented in its original aspect ratio of 2.35:1 and enhanced for widescreen TV's the UK disc of The Horseman on the Roof is a vast improvement over the existing R1 DVD yet it is not a perfect one. This should tell you how hopelessly flawed the Miramax release was (non-anamorphic, cut, color manipulated, with horrible yellow subs, etc). The UK disc offers the authentic, original, European release of the film: no cuts, no edits, no manipulations! While color and contrast appear largely well handled the print offers some minor issues such as overcompression and visible macro-blocking. Especially during night scenes it becomes evident that the UK distribs could have provided more for the DVD release of this most beautiful film. Also, there are notable areas of softness that some might find distracting. Everything else however remains quite pleasing to the eye and there is no doubt in me that if you like the film you should most definitely be importing the UK version.

The UK release offers only the French Dolby 2.0 track which is most certainly well done but a more elaborate mix could have been added, no doubt about it. Dialog and music are well separated and I had no trouble following the actors' speech. Unlike the dreaded Miramax release the subtitles on the UK disc are white, in very decent font, and are removable even though when accessed through the main menu might appear as burnt-in. They are not and depending on the player you use you should be able to turn them off.

The only piece of extra on this disc is a half-hour interview with Jean-Paul Rappeneau in which the director explains how he took the challenge of adapting Jean Giono's 1951 work. The interview sheds plenty of light on the film, its realization, and the cast involved with it. Indeed this is a great piece of supplemental material.

Let's be honest here: after the dreaded hack Miramax provided North American customers with this UK disc is a revelation of paramount proportions, it is as simple as that!! Indeed, there are a few tiny problems with the presentation but nothing that I would consider so profoundly disturbing that will consequently keep me away from adding this film to my collection. If you ever wanted to own the film I think it is safe to lament that Miramax will NOT go back and release a Special Edition offering anamorphic transfer and the film in its uncut form. Quite frankly I am tired of supporting a few aged apparatchiks who wake up each morning thinking that they have the right to censor everything that comes near their overpriced desks (buying their products equates support). I am also tired of being polite and not calling on what these people do with films that happen to be produced thousands and thousands of miles away – it is a travesty!! And, it is becoming cliché whining all the time how Miramax does not respect the rights and work of foreign directors: RECOMMENDED!!