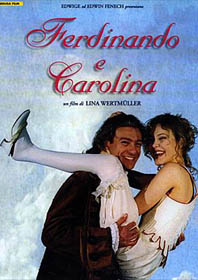 Amongst hardcore fans of Lina Wertmuller's work Ferdinando e Carolina (1999) often enjoys the status of a film with plenty of substance. Many seem impressed by the edgy dialog and effective punches the film spares and of course the sexual interludes between the two main protagonists are always looked upon with a fare share of approval. I, however, am anything but impressed.

Completed in 1999 Ferdinando e Carolina tells the story of Ferdinando I Borbone (Sergio Assisi), the notorious eighteen century King of Naples, as he recalls the days of his youth. His memories lead him back to the time when he was asked to marry the Austrian Maria Carolina d'Asburgo (Gabriella Pession) in order to secure the well being of Italy. At first unwilling to perform his "duty" the King of Naples quickly succumbs to Carolina's charm and the two begin to explore their bodies with a zest.

Despite the fact that Ferdinando e Carolina offers all of the necessary ingredients a Lina Wertmuller picture requires - spicy humor, edgy dialogs, plenty of skin, and impressive emphasis on detail (decors, costumes) - this is quite possibly one of the Italian director's most disappointing works. The story, filled with references to Italian and Spanish history, unsuccessfully attempts to be both entertaining and sarcastic at the same time and sadly never manages to engage the viewer as well as Pasqualino Settebellezze a.k.a Seven Beauties (1975) for example did. The farce Lina Wertmuller intended is most certainly there but it is hardly as convincing as one might have expected.

Part of the reason why this film misfires so badly is due to the fact that many of the historic "facts" are downsized to such laughable scenes that I am puzzled if they were indeed meant as such or the poor acting of the main protagonists simply altered the script. Take for example the scene where Ferdinando contemplates his future while in the hands of his court lover – it is a well known fact that the King of Naples was neither a man of weak character nor he was a man willing to consider the advises of his servants. Yet, we see Ferdinando shaking like a boy expecting his first sexual encounter asking for help. Even worse the laughable lines (something Lina Wertmuller typically manages to successfully veil with a heavy layer of sexual innuendo) are so unconvincing that even the most tolerable fans of the Italian master will have a hard time justifying them.

Of course like most Lina Wertmuller films Ferdinando e Carolina is beautiful to behold. The lush court decors, the spectacular dresses, and the great music the film is complimented with (the Italian serenade heard throughout key scenes is beautiful) once again bring an unusual flavor to this otherwise tedious farce. But it sure isn't enough! The great characters that made Swept Away (1974) or even The Seduction of Mimi (1972) such a success are indeed a thing of the past. So is the arousing camera work which Lina Wertmuller mastered to perfection in her The Blue Collar Worker and the Hairdresser in a Whirl of Sex and Politics (1996). What has remained is only a whiff of the great seductive power this most talented Italian director once revealed.

Presented in its original aspect ratio of 1.66:1 but NOT enhanced for widescreen TV's the print herein reviewed is an exact replica of the one already released in the Lina Wertmuller boxset. It is also an extremely disappointing one: heavy specs and scratches, some noticeable detrimental grain, questionable color gradation, and a less-than-impressive degree of detail transform Ferdinando e Carolina as one of the true disappointments form the recently released R1 DVDs with her films. And this is quite unfortunate as far as I am concerned as this film is the Italian director's most recent one (1999) and should have been treated with much more respect than what Koch Lorber have offered.

I don't have much praise to spare for the audio presentation either! Presented with a Dolby Digital Italian track and optional yellow English subtitles (I hope that someone will finally approve white subtitles as the standard used by Koch Lorber) the audio mix is average at best. While dialog is crisp and easy to follow the music coming off the speakers is dull and in my opinion simply flat!!

Unfortunately there are no supplemental materials to be found on this DVD release!

Even though I have a great deal of admiration for Lina Wertmuller and her films Ferdinando e Carolina is one of my least favorite pictures. As far as I am concerned neither the story nor the acting come even close to the high production quality we have come to expect from the enigmatic Italian director. Sadly the R1 release of this film is equally disappointing: for die-hard Wertmuller fans: RENT IT.