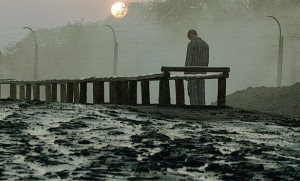 An enormously moving film about the fate of a young Jewish boy who struggles to survive the Nazi occupation of Hungary Sorstalansag a.k.a Fateless (2005) has finally arrived to North American shores. Touted by the European press as one of the true cinematic events from last year Lajos Koltai's film was also submitted as Hungary's official Oscar entry.

Written by Nobel Prize-winner Imre Kertesz Sorsalansag begins in 1944 Hungary when young György Köves (Marcell Nagy) is pulled away from the school bus he uses daily and sent on a nightmare journey through the "camps of death" – from Auschwitz to Buchenwald and finally Zeitz. As he attempts to outlast the hundreds of men around him 14 year old György will face what simple words can not describe: piles of dead human flesh, heroes whose names will never be remembered, and a world consumed by human madness.

Guided by the magical baton of famous cinematographer Gyula Pados (his recent contribution to Kontroll (2004) was highly praised at the Cannes Film Festival where the Hungarian sensation won the Award of the Youth) Sorsalansag was the film I hoped will win the Oscar statue for Best Foreign Language Film. Unfortunately the picture was not even amongst the finalists the Academy picked and I think that I have a pretty good idea why!

Unlike other epic Holocaust films (The Pianist/ Schindler's List) Lajos Koltai's Sorsalansag attempts to tell a story that many will be surprised to find out has a very different message – instead of drawing a clear line between victims and criminals this impressive Hungarian film steps into a territory not that many films that I can recall have had the courage to explore. Sorsalansag offers a unique look at the transformation of a young boy who has "earned" his freedom but his return home becomes such a disappointing experience that he would often recall the quiet days at the Nazi camps.

Furthermore, what makes Lajos Koltai's film such a unique experience is the dilemmas 14 year old György faces through his journey to freedom. Unlike the heroic environment Schindler's List evokes Sorsalansag asks some very difficult questions that especially in the final act of the film provide much food for thought to those who might have expected a familiar "resolution". Through young György what the viewer is asked to see is a world full of controversy where those who have suffered the most find themselves unceremoniously isolated and scorned even by their own brothers and sisters. 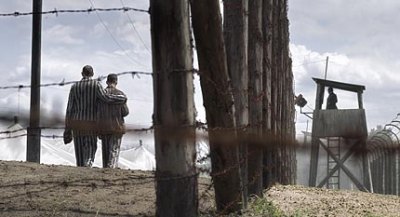 Sorsalansag also defies the common cinematography standards applied to films dealing with the Holocaust. As cynical as it may sound Lajos Koltai's film is beautiful to behold! Shot in dreamy golden-haze colors Sorsalansag reveals heavy contrasts (beautiful vistas are fractured with ugly images from the concentration camps) in a manner morality collides with reality in György's soul. From the scene where he dreams about the "happy" days at the camps (pay very close attention to the lines György utters as they reveal much of what the film is all about…even though it all may sound as blasphemy) to the final act in which the boy is "greeted" upon arrival at his old home Sorsalansag is more of a film about maturation than it is a story with a lesson to be learned!

Twice in Sorsalansag young György is offered a way out to freedom. The second time in particular when the boy is invited to escape in America is so critical for the story that I thought the entire premise of this film would collapse under the heavy weight of clichés we have often seen used in other highly-decorated dramas. Instead Sorsalansag veers off in a direction that is so unexpected it practically provides endless reasons for its critics to dismiss the film as being immoral. In fact, the entire final segment of the story must have disappointed quite a few of those who had hoped to see yet another straightforward production about human triumph. On the contrary Sorsalansag provides so much authenticity to what it attempts to reveal that for days I after I saw it I could not stop recalling the lines young György uttered.

Presented in its original aspect ratio of 2.35:1 but NOT enhanced for widescreen TV's Fateless is quite possibly the dullest and most disappointing release to street in North America this year. Given the enormous interest this film had generated and the expectation film buffs had about the R1 release by ThinkFilm I am simply astounded that such poor presentation has been approved by the quality department (if there is one) of the company producer. There is almost nothing positive in this release that I could share with you in this review: secondary PAL-NTSC transfer with heavy amount of "ghosting", laughable color-gradation which especially during the camp scenes transforms this print into a horrendous experience, and edge-enhancement galore that should certainly be a concern for those who decide to rent the DVD. The only positive aspect of this "release" is probably the relatively decent degree of detail which has been inherited from the Hungarian Deluxe edition but you would have to watch the film on a less than 20-inch tube screen so that everything else I mentioned above is somewhat negated.

Offering Hungarian 2.0 and 5.1 tracks the audio presentation on this DVD is also very disappointing. As this is the area where we typically discuss subtitles and translation the first thing that I must share with you is that the American distributors have decided to provide burnt-in subtitles for the main feature which should automatically raise a red flag for many of you with 16/9 TV's. The white subtitles I assume are the same ones used as a side option for the Hungarian DVD…which also offered a thunderous DTS track. Given how enormously subtle the soundtrack of this film is I am utterly disappointed that nothing more was provided. The beautiful score by Maestro Ennio Morricone and angelic singer Lisa Gerrad from Dead Can Dance is anything but presented in its full glory as heard on the Hungarian 2DVD set. Yes, you could probably rent this R1 DVD and watch the film but the emotional power of the story complimented by the beautiful singing of Lisa Gerrard will most certainly be missed.

ThinkFilm have copied a few of the bountiful extras from the R2 Deluxe release but what good is it that we talk about extras when the main feature has NOT been given the proper care:

First there is the "Making of Fateless" where we are offered plenty of footage from the shooting while we see the director and crew attempting to truthfully recreate the original story this film was based on. Next, there is an excellent interview with Nobel-Prize Winner and author Imre Kertez which is also exactly the same interview provided on the R2 DVD (also with optional English subtitles). To be honest I do consider this to be the most important extra provided as basically what the viewer is offered is answers to any questions one might have regarding this project. Last but not least we are offered the original theatrical trailer.

What a gaffe! I am not quite so sure who approved this DVD release of Sorstalansag but all things considered the film has been given the same treatment the award-winning Hungarian production Kontroll received (once again courtesy of ThinkFilm). My question here is: OBVIOUSLY this release is not indicative for the quality work ThinkFilm are known for. So who was responsible for this dreadful presentation?? Non-anamorphic transfer, burnt-in subs, skewed color-scheme, a PAL-NTSC cheap port…I am not so sure how people feel about such "work" but we are currently at the dawn of a new era where HD sourcing is considered not a return to VHS standards. And really if treating an Oscar-caliber feature with the necessary respect is not your forte…by all means, please step away and let someone else do it!! ThinkFilm are better than what this DVD reveals!!!

Out of respect for the work of the Hungarian crew and the man whose tragic story this film attempts to retell: RENT IT.