Walt Disney's It's a Small World of Fun, Vol. 1 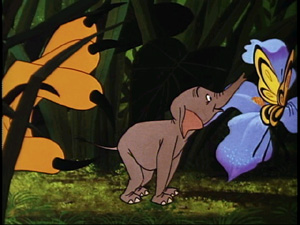 The two volume It's a Small World of Fun! is the latest repackaging scheme of the Walt Disney Corporation. The gist of it is pretty simple: DVDs featuring classic cartoons that take place in various countries around the world. Clocking in at under an hour and featuring cartoons that are primarily available on other, better discs, these aren't going to be any great treasure for the animation collector. As a primer for younger viewers, however, there is some good material here, and if you can get them for a decent price point, they might be a good gateway to getting someone into old-fashioned (read: non-digital) cartoons.

* "The Flying Gauchito" (focus region: South America): As far as I can tell, this is the only place to find this 1945 short about a little boy who enters a horse race with a winged burro. It's a cute story, with designs and colors suitable for the subject matter, making it one of the best as far as representing the chosen area. The style is vintage Disney.

* "In Dutch" (Holland): This is a Pluto cartoon, with the hapless canine traveling through Holland delivering milk. His thoughts turn to love when he runs across a cute lady dog, but when they discover a hole in the dyke, Pluto has to convince the locals to lend a hand. The slapstick in Pluto cartoons is generally funny, but the real draw of this short is the colors. The tulips in particular are gorgeously painted.

* "Goliath II" (India): My favorite on the disc. Directed by Wolfgang Reitherman seven years before the release of The Jungle Book, "Goliath II" stylistically sets the stage for that feature. Goliath is the runt of his pachyderm pack, much to the embarrassment of his father. The little guy becomes the target of the neighborhood bad guy and narrowly escapes to show his bigger relatives that they need not be scared of mice. It's narrated by Sterling Holloway, and there are some good comic moments. The animation style is a little looser, with rougher lines than Disney was often known for, giving "Goliath II" a wilder, kinetic feel.

* "Mickey Down Under" (Australia): One of the weaker entries is, of course, the one with the biggest star. I've never found Mickey Mouse as appealing as many of the other Disney characters. This is a pretty average short subject with Mickey and Pluto out on the hunt. It didn't really feel like Australia was that much of a focus (and for that matter, India wasn't a big player in "Goliath II"), so on that front, it falls short, too.

* "African Diary" (Africa): A Goofy travelogue with the oddball dog leading an expedition across the African continent. Some good laughs, with the expected wry narration of a standard Goofy subject.

* "A Cowboy Needs A Horse" (U.S.A.): This cartoon is distinctive on the disc as it's the only one that is entirely musical. As a little boy drifts off to sleep, he begins to dream of being a cowboy. His bed becomes a horse--a nicely abstract design--and he goes on the sort of frontier adventures little boys of the 1950s would fantasize about. The director, Bill Justice, makes good use of limited animation, using backgrounds painted in monochrome to bring out the feel of the American Desert.

* "Grievance of a Starmaker" (Japan): This is a new cartoon making its debut here. It is based on a story by Erika Tsunoda that won the grand prize in the Tales of Imagination contest at something called Imagination Day 2001. Essentially, it's a modern folk tale about a little boy who wonders why he can't see the stars, so he climbs a celestial ladder to the home of the Starmaker, an old man in the sky who is in charge of the heavens. When the boy discovers the Starmaker can't keep up with maintaining the stars because man's pollution keeps dirtying them up, the child decides to lend a helping hand. The environmental message is a little trite, and it ultimately doesn't mask that there isn't much of a story here. Plus, the contemporary style doesn't hold up well when placed next to the superior classic cartoons presented here. The line work is simple, with nice brushy lines, but the digital movement feels more at home on the internet than it does as part of the Disney canon. 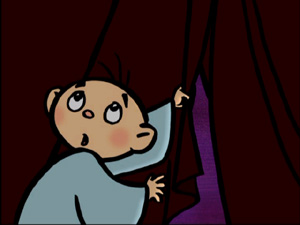 All in all, It's a Small World of Fun vol. 1 is a mixed bag. For the price, it's not the greatest value, particularly given the amount of recycled material here. If Disney wanted collectors to double-dip, then a one-disc full length collection would have been much better than two shorter ones. Still, kudos to them for resisting making it more kid-friendly by attaching some kind of framing element around them all. It's nice to be able to watch the cartoons straight through.

Video:
All the cartoons are presented in a full frame 1:33:1 aspect ratio. Unfortunately, they are not all handled with the same care. There is a definite prejudice to the bigger names among the lot, with the Pluto, Mickey, and Goofy shorts receiving a pristine transfer. "The Flying Gauchito" is the worst for wear. The picture shakes often, and the print is dirty and muted, with little spots appearing throughout. "Goliath II" suffers similar problems, with colors often fading and/or flickering as well as being too dark. In the case of this particular cartoon, though, it sometimes appears that could just be a flaw in the animation. 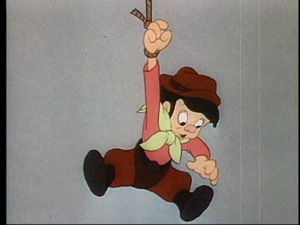 Sound:
A straightforward stereo mix. No harm, no foul.

Extras:
As you can expect with any Disney release, they consider a slew of commercials to be a bonus. They also hawk their "Fast Play" concept, which means that after you're done watching the trailers on the front of the disc, the feature will start right up. What they allege "Fast Play" is designed for is so parents can put the DVD on for their child and walk away, no additional buttons need be pushed; what they've really done is try to suggest that their trailers and whatnot are part of the essential viewing.

FINAL THOUGHTS:
I'm going to say Skip It overall, with two minor caveats: the above suggestion that It's a Small World of Fun! might make a good primer for young fans new to Disney cartoons, and if you are at least vaguely interested in the shorts not on the better DVD sets, then give it a rent. Otherwise, stick to the higher end Disney releases, as they are far more bang for your buck.