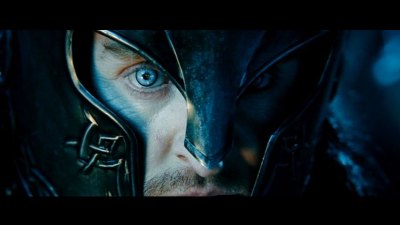 There's nothing I love more than being able to sincerely "champion" a good ol' mindless popcorn flick. And while I was wasn't all that impressed with the original Underworld upon first viewing, I've slowly grown a small affection for the flick. So when I sat down to visit with Underworld: Evolution for a second spin, I found myself actively trying to find good things to say. I looked over at the flick's anemic approval rating at Rotten Tomatoes and thought, "Hey, I'd really like to add a positive review to the mix, because I love popcorn movies and I think I'm a pretty good judge on what makes a good one."

Despite my best efforts, I found only a few small nuggets of pleasure in Underworld: Evolution. I don't think it's an outright crap-heap, as far as action sequels go, but it's just too darn dour, convoluted, and redundant to rally much enthusiasm. 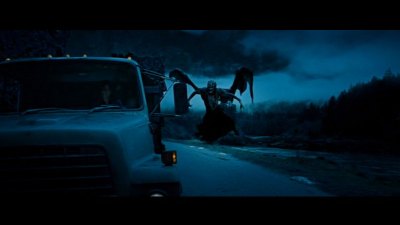 We open with a "long-ago" prologue before picking up precisely where Underworld left off: Death Dealer Vampiress Selene and her purple-yet-hunky vampire/werewolf cross-breed of a boyfriend have thwarted their numerous foes and finally have a moment to make out when...

Whoops, someone went and woke up Markus, a very unpleasant Daddy Vampire who'd really like to know why his family is completely dead and one of his sexy underlings is making out with a purple semi-Lycan. There are three or four other plot-threads, but they're all very gnarled and twisted and basically unimportant. All you need to know is that the amazingly hot chick in the skin-tight pleather jumpsuit is the hero, and everyone else is grist for the gore mill.

So while it's certainly admirable that Underworld: Evolution is trying to deliver some actual emotion and/or character beneath all the chaotic stabbings and slick beheadings, the simple truth is this: When the Underworld flicks deviate from the action stuff, they're both pretty dry, dumb, and frequently kinda laughable. The original flick gets a semi-pass because we were new to the whole concept, but by the time a Part 2 rolls around, you'd hope your filmmakers would accentuate the positives and minimize the negatives. 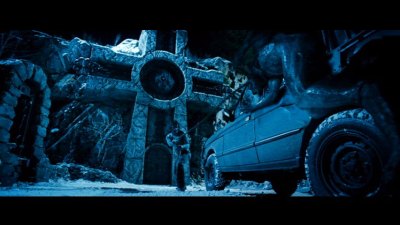 Underworld: Evolution suffers the same fate as many sequels: It was banged together rather expeditiously after the first one become a surprise hit, and as you wade through the sequel's myriad plot turns and overbaked back-stories, you just might find yourself thinking ... just get to the action already. Not even seasoned pros like Bill Nighy and Derek Jacobi can manage to cut through the tediously over-plotted shenanigans, while (again) Ms. Beckinsale is asked to do little besides pose, punch, and jam knives into screaming beasties.

Stuffed with slick production design, fantastic special effects, and a few satisfying action scenes, Underworld: Evolution is still a pretty big disappointment; the thing takes itself way too seriously and relies way too heavily on its "multi-generational gothic soap opera" exposition volleys that crop up whenever someone's ass is not being kicked.

Even now I feel I'm being perhaps a bit too kind to the flick, but it'll still earn a place on my Guilty Pleasures shelf, right next to a half-dozen mindless action thrillers that involve vampires, werewolves, zombies, and the mega-sexy women who love to kill them. 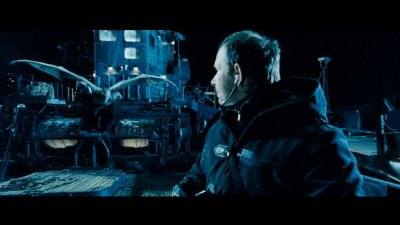 Video: The anamorphic widescreen (2.40:1) transfer is quite excellent, what with all the splattering arteries and dank drippy caverns.

Audio: Dolby Digital 5.1 (English or French) with optional subtitles in the same two languages. Audio quality is expectedly strong, considering we're talking about a fancy action flick that was made about nine months ago.

There's an audio commentary with writer/director Len Wiseman, production designer Patrick Tatopoulos, 2nd unit director Brad Martin, and editor Nicolas de Toth. Early on, the guys seem intent on delivering production information and they keep the comments flowing smoothly. Wiseman mentions how much he hates the "narration" style of commentating, so he leads his team through the chat-track with success. The guys (who share a bottle of wine to keep the chatter flowing) love to focus on "where this was shot" and "ok, now THIS is a miniature and THAT is digital," but if you're a fan of the series, the commentary's not half bad.

A half-dozen featurettes are also included, the standard sort of extra material that's not exactly EPK-style self-love, but gives only a cursory look at the behind-the-scenes activities. 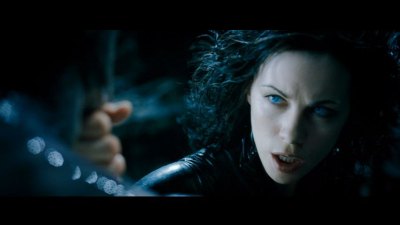 Bloodlines: From Script to Screen (13:25) covers the creation of the second story and the lead actors' impressions of the sequel

The Hybrid Theory (12:59) looks at the FX work, both practical and computer-generated.

Making Monsters Roar (11:56) deals with the creature creations, from the new-fangled werewolves to the mega-fanged bloodsuckers.

The War Rages On (9:52) focuses on the extensive stuntwork in the flick.

Building a Saga (12:54) is all about the production design and locations.

Music and Mayhem (11:49) covers the sound design and music.

In addition to the commentary and the featurettes you'll also get a music video for "Her Portrait in Black," by Atreyu, which I find amusing because the band's all dark and angry despite being named after a character from The Neverending Story, and a bunch of previews for When a Stranger Calls, Ultraviolet, London, Click, Underworld, Hostel, The Boondocks, Marie Antoinette, The Exorcism of Emily Rose, The Benchwarmers, Silent Hill, The Three Burials of Melquiades Estrada, and The James Bond Ultimate Collection.

I suppose those Underworld: Evolution trailers are being reserved for the inevitable Underworld: Fully Evolved, Uncut and Unrated edition.

I guess it's just that an action/horror combo really speaks to the geeky little 12-year-old in me, and I get a little more forgiving where bad writing, confusing editing, and ass-backwards storytelling are concerned. If you dug the first Underworld, I suspect you'll like this one too, only not as much. And if you hated the first one and you're hoping the sequel's an improvement, I suggest you go ahead and rent something else.