Rollergirls: The Complete Season One

A&E Video // Unrated // May 30, 2006
List Price: $39.95 [Buy now and save at Amazon]
Review by Scott Lombardo | posted May 29, 2006 | E-mail the Author
Opening Thoughts: Here's the scenario: Ten scantily dressed Texas girls sweating, skating and fighting their way around 300 feet of a banked, wooden track. Meanwhile over a thousand screaming fans cheer them on to victory. Sound exciting? Well it is, but how well does it translate well into a reality television show? 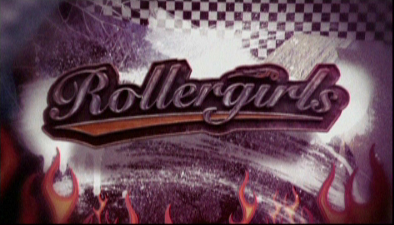 Movie: Roller Derby has been around in one form or the other in the United States since the mid 1930's. I even remember as a kid watching (and enjoying) some bouts on TV in the mid 80's. The sport has seen its ups and downs over the years, but is trying to make a comeback thanks to small organizations across the country. Rollergirls follows TXRD, a homegrown all women's Roller Derby organization founded in Austin, Texas. The Lonestar Rollergirls have been rolling since 2001 and are independently operated and owned by the skaters. They currently sport 5 teams: the Holy Rollers, the Hellcats, the Putas Del Fuego's, the Cherry Bombs and the Rinestone Cowgirls. Their season lasts from January to May and the two best teams battle it out in June for the "Calvello Cup Championship", which is named after the legendary derby queen Anne Calvello. While there are variations of the rules in Roller Derby, they've primarily stayed the same over the years. In TXRD five players from each team take the track. Four of the five team members are "blockers" and they take off at the first whistle. Then at the second whistle, the two remaining players (one from each team) take off. They're called the "jammers" and they each wear a star on their helmet to indicate this position. Each jammer tries to make their way through the pack and whichever jammer that is in front is considered the "lead jammer". The "lead jammer" then tries to pass as many opponent blockers as possible, scoring one point for each passed. Each jam lasts 60 seconds, but at any moment by placing thier hands on her hips, the "lead jammer" can call off the jam. There are four 8 minutes quarters with a halftime. There are also penalties for tripping, holding, punching and pushing towards the inside. Both major and minor penalties are handed out given the severity of each infraction. 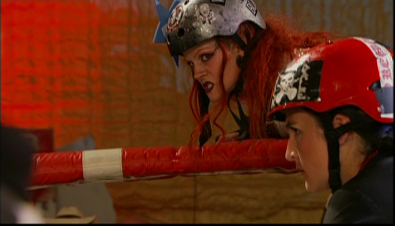 A&E starting broadcast episodes of the reality series Rollergirls in early 2006. Most of the episodes follow a similar format. A team or single player's personal life is usually highlighted and then at the end of the show we see a bout featuring the aforementioned players. For example, the first episode entitled "Rookie" follows Venus Envy, a new rookie for the Puta Del Fuego's. We get to learn about her life outside of the derby, her boyfriend Palmer (who looks exactly like a young Hunter S. Thompson) and even meet her mom when she shows up for Venus' first bout. Then we get to see Venus and her fellow Puta Del Fuego's duke it out against the Rinestone Cowgirls. This is where the action heats up as these girls get down to business in the Thunderdome. During each bout there are plenty of wipeouts, scuffles and rail-eating to keep you entertained. Then occasionally when a minor penalty is issued, you might get to see two of the girls go at it in a pillow fight, a joust or one-on-one jam. Each Rollergirl has a nickname and besides a few exceptions, that's the only name the girls are referred to as on the show. Some of the more colorful nicknames include Punky Bruiser, Varuca Assault, Blanch Davidian, General Lee Fiesty, Holly Peno, Miss Conduct and Clownsnack . Besides Venus Envy, the show also pays more attention to some of the better players in the league. The Amazonian like Sister Mary Jane and the fierce but beautiful Lux get plenty of screen time throughout the 13 episodes. By the end of the series, we get to know quite a lot about each girl and their struggles on and off the track. I felt the standout episodes in this series were: "Big Time", "Searching For Anne Calvello", "Warriors", "Undefeated" and "Skating Away" 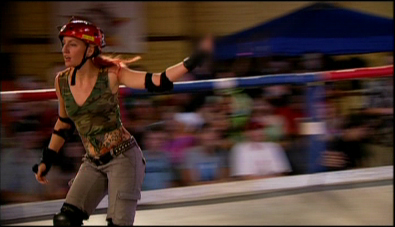 I admit that I watch far too much reality TV programming. I'll blame MTV for corrupting me in my youth, after all they got me started with The Real World and Road Rules. One of the reasons I think reality programming has become so popular is that it's addictive. Eventually if you watch enough you end up getting to know and care for the individuals in each show. You want to check up on them and see how and what they're doing in their lives. Watching Rollergirls, I initially wasn't that enthralled with the show. But after about 4-5 episodes, I started to warm up to the show and ended up enjoying it. That being said, I also felt that 13 episodes were a little too much for this series. Ultimately I felt that there was too much filler and an overall lack of focus spread over the season. I think the producers could have easily fit everything in 5 or 6 episodes. While it's fun to watch these ladies get down and dirty on the track, I think it'd be so much better to see it live in person. I'm already excited to go out and see one of the local leagues in my city and I really hope that this series helps the sport to continue to evolve and grow. Unfortunately, in April 2006 A&E cancelled Rollergirls so this is the first and only season you'll likely see of the ladies of TXRD on television. 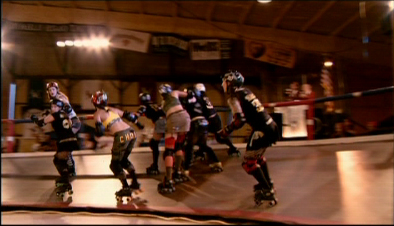 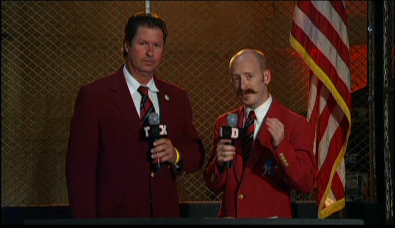 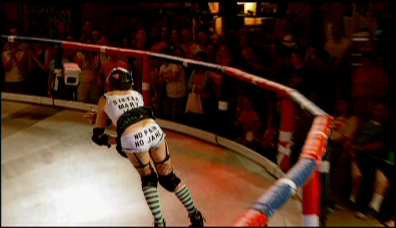 Final Words: After watching Rollergirls I came away with a few things. I really, really enjoy the sport of Roller Derby. It's a great concept and I respect and admire all the women who start up their own leagues and scrap it out on the track. The other thing I learned is that not everything can be made into a successful reality television show. Even something as fascinating as the Lonestar Rollergirls might just not cut it in the saturated reality TV market. That doesn't mean I don't recommend checking out Rollergirls on DVD, but I simply can't give this release anything other than a "Rent It". A&E really dropped the ball on this release by not giving the transfer anamorphic enhancement. Such things should remain a stigma of DVD past.