Saviour of the Soul 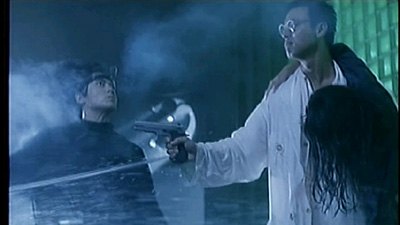 Aging supervillain Old Eagle (Henry Fong) makes it his dying wish that his apprentice, Silver Fox (Aaron Kwok, Storm Riders), exact revenge on the "City Soldier" who humiliated him, a kick-ass female hero named May (Anita Mui, Heroic Trio). The City Soldiers are actually a quartet--alternately known as the Saviours, by some translations--of high-powered kung-fu cops. May is caught up in a love triangle with two of the others: young, hot-headed Ching (Andy Lau, House of Flying Daggers) and bespectacled good guy (he's dressed all in white, after all) Siu Chuen (Kenny Bee, Initial D). When Siu Chuen gives his life to protect May from Silver Fox, it pulls her and Ching even farther apart. She can be with no other man until she avenges Siu Chuen. To further complicate things, Ching is now in charge of Siu Chuen's sister Wai Heung (Gloria Yip), and naturally the fifteen-year-old girl falls for his movie-star good looks. He also picks up his own arch nemesis, the Pet Lady (Carina Lau, 2046), after breaking her heart when he mistakes her for May.

Originally released in 1991, Saviour of the Soul is a goofball throwback to old Hong Kong action flicks. It's by no means a great movie, but at times, it is campy fun. Everything about this film is so over the top, it's hard not to get caught up in the wackiness. Lau in particular plays every melodramatic emotion to its full comedic effect. When he wiped a single tear from his cheek and declared, "I am not crying this for you, but for me," I surrendered to the ludicrous plot and let everything else go.

Saviour of the Soul certainly has quite a pedigree. Beyond its power cast, it is directed by David Lai and The Transporter's Cory Yuen, and its cinematography is by Peter Pau, who lensed Crouching Tiger. The action is the most fun of all the movies elements. The imagination of the filmmakers comes off as even wilder than today's big-budget superhero directors (and let's face it, this really is a superhero movie) who have the benefit of doing anything they want with CGI. Seeing old-school animation and models amidst all the leaping around and blowing things up has a quaint charm.

Perhaps the strangest link between old and new Hong Kong here, though, is the fact that one of the screenwriters is celebrated auteur Wong Kar-Wai (In the Mood for Love). (The other is Jeffrey Lau, who later made the hilarious Chinese Odyssey 2002, which was produced by Wong.) I'll admit, this chance to see one of my favorite directors earlier studio efforts was a big draw for me, but finding any hints of the future master within Saviour of the Soul is a bit of a stretch. There is that familiar longing between two lovers and the invocation of memory, but I think I just wanted to see that, to be honest. Still, Saviour of the Soul proves we all have to start somewhere. (Interestingly, 1991 is also the year Wong Kar-Wai directed his second film, Days of Being Wild.)

Just to be clear, I'm not recommending Saviour of the Soul outright. It's not that good of a movie. If you're into this kind of thing, though, and you want to kill an evening with a few chuckles, then this DVD may be worth a peek.

Video:
Saviour of the Soul is billed as a "special edition," and it certainly appears to be a newer release with up-to-date star credits on the box art and fairly recent trailers. Beyond that, I can't see much that's special about it. The letterboxed print is pretty scratchy and the lines are all soft. It looks like an old DVD in a new box.

Sound:
Two 5.1 mixes spruce up the disc, one in the original Cantonese and one an English dub. If the mix truly is updated, it is only in the most cursory of senses. I didn't hear anything special about the effects. In fact, everything just seemed loud (especially the cartoon sound effects) without much balance, and the music sounded tinny. I sampled pieces of the English dub and it's predictably comical: over-the-top performances from below-sea-level actors. There is also a no-frills Mandarin dub.

Both traditional Chinese and English subtitles are offered, and they are removable. The English ones are fair, but not great. There isn't much poetry to them, but this isn't Shakespeare, either.

Extras:
None, except a boatload of trailers. Five or six appear before the movie, and there are a whole bunch of different ones accessible through the DVD menu.

FINAL THOUGHTS:
Like I said, Rent It if you feel like having an evening of stupid action. I'll certainly never watch Saviour of the Soul again, but I wasn't sorry for the first viewing. Sometimes it's refreshing to watch a film by big talent that doesn't take itself all that seriously.