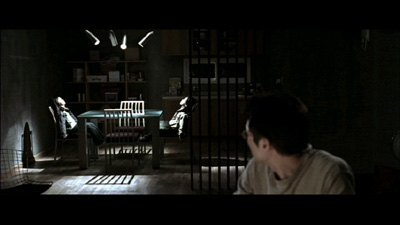 Don't let the tagline on the DVD box worry you. "There is more to this world than is safe to know," it says. This might be a warning one should heed if not for the fact that The Uninvited goes out of its way to not explain anything. Whatever those dangerous things are, you'll still have no idea by the closing credits.

The Uninvited opens on a Korean subway. Jung-won (Shin-yang Park) is dozing off on his way home from work. When the train reaches the end of the line, the announcement over the loudspeaker wakes him up, and he narrowly makes it through the closing doors onto the platform. As the train pulls away, however, he notices two small children are still inside, sitting opposite one another, not moving. The metaphor is a heavy one: life is going to keep going without you, Jung-won, so you'd better rouse yourself from your stupor and live it.

Of course, being the hero of a horror movie, Jung-won isn't going to get the message. In fact, how does he react to this sight? He doesn't do anything. He just stands on the platform and looks around. No point in alerting anyone to these lost children, right? This is how Jung-won operates through the entire film. He isn't an active participant, just a passive reactor. Hee-eun (Seon Yu), his fiancée (whatever did she see in him?), informs him of plans for their wedding, and he just smiles and nods. The employees at his interior design firm open up a ceiling as Jung-won hangs back and watches, and debris falls and hits him in the face. That's the character in a nutshell: stand and watch while stuff hits you in the face.

Which might be fine for a film about existential crises, but this is a horror movie. At some point, the protagonist has to get scared so that the audience can participate in the terror. If the terrorized are merely nonplussed, then moviegoers will be as well.

The plot for The Uninvited has enough of a set-up to build a scary picture out of. The day after he sees the children on the subway, Jung-won hears on the news that they were found dead, poisoned by their own mother. He begins to see visions of them, most often sitting at his kitchen table. The table is an odd object unto itself, put together by Hee-eun, a lighting designer. She set it up so the lights shine on the individuals sitting at the table, not what it is put on it, because the focus is no longer eating but the conversation, not the food but the people. One would think this will be another heavy symbol, that Hee-eun will serve in the role of illuminator, shedding light on the bizarre things that are about to happen to her main man. No dice.

Rather, we get a third character, Yun (Ji-hyun Jun from My Sassy Girl), who is depressed and suffering from narcolepsy. She and Jung-won keep running into each other, and when he discovers Yun can see his ghosts, too, he becomes obsessed with her. It turns out that she is embroiled in her own infanticide drama: her best friend killed both her own and Yun's babies while Yun watched. It's possibly this empathy that allows Yun to see the same things as Jung-won, we're never sure. It does at least put her in the position to draw out Jung-won's own dark secrets. Never mind that his traumatic past has no real connection to hers.

Or, on second thought, you should mind. Because that's exactly what is wrong with The Uninvited. None of its elements ever connect. There are no lines drawn between the two murderous mothers, no parallel between Jung-won's tragedy and Yun's, and ultimately, no explanation as to why these two people were drawn together in the first place or why the two dead children--who are completely forgotten for the latter half of the movie--have chosen to sit in their death poses in Jung-won's kitchen. Everything is just tossed into a pot and then the movie ends and the viewer is left scratching his head.

Which would all be fine if The Uninvited were actually scary. I could forgive any ludicrous plot machinations if I was jumping out of my seat every couple of minutes. Outside of two really gruesome deaths, though, I wasn't even creeped out. Writer/director Su-Yeon Lee makes no effort to create an atmosphere of suspense. Apparently, a couple of dead babies are enough. 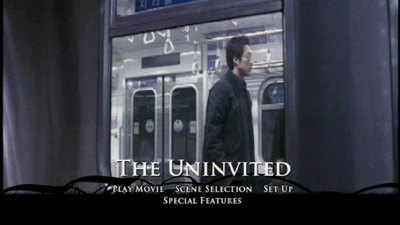 Video:
Panik House has released The Uninvited with a 1.85:1 aspect ratio for 16X9 televisions. The picture is clear with vivid colors and no noticeable flaws.

Sound:
The original Korean language track is mixed in both 5.1 and 2.0. I'm still a 2.0 guy, but if they did as good a job on the 5.1 as they did this, you higher-tech folks should be more than pleased. There were lots of nice, subtle effects in my back speakers, including points where the cries of the children were supposed to be all around you in an attempt to give the heebie-jeebies.

There are both English and Spanish subtitles, and interestingly, at the start of the DVD you can choose either language for the menu, as well. The English subtitles are well-done and easy to read. There are occasional moments where some finesse could have been used to find the right English idiom, but overall, a solid professional job.

Extras:
The Uninvited is well packaged, including a die-cut, embossed cardboard slipcase. Inside the box, there is a chapter-listing insert and a full-size sticker of the box cover. They could have proofread the back a little better, however, as they promised me the film would be only 96 minutes. When it went past the mark and I realized it was really over two hours, I felt like I was in one of those nightmares where you're heading for a door and no matter how fast you run, it keeps getting farther away.

In addition to the physical extras, there are a bunch of bonus features on the DVD, too. The behind-the-scenes Making of The Uninvited featurette is actually nine separate vignettes from filming. Each range from two to four minutes, and there is no play-all option. They all focus on an individual scene and show the raw footage behind constructing it. Some of them show physical action, and some show Ji-hyun Jun working on heavier emotional elements.

The best extra is the fifteen-minute comparison of storyboards and pre-production drawings to filmed sequences, narrated by director Su-Yeon Lee. Other bonuses include a short interview with the two principle actors that is genial but not overly informative, trailers and poster galleries, production notes and bios, theme music, and a detailed text essay on Korean horror by film critic Art Black. By far the most puzzling feature I've seen in a long time is Abridged: The Uninvited Condensed. The entire film is edited into fifteen minutes, removing almost all of the secondary characters and subplots. Couldn't I have just watched this instead? 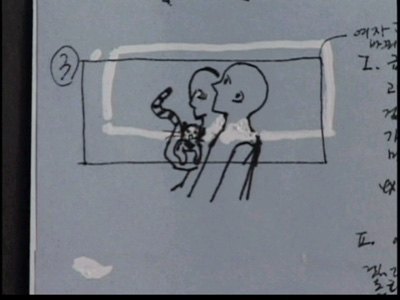 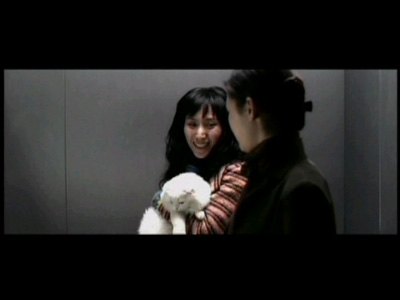 There are two audio commentaries. One is read by "film licensor" Ed Lee, and it's a longer version of Art Black's text piece run elsewhere on the DVD. While interesting and in-depth, the commentary is tough to listen to because it's obvious that Lee is reading someone else's work. His monotone voice makes me think of being stuck in a classroom while another student is forced to read aloud from a textbook. Only part of the commentary focuses on The Uninvited, instead serving as a primer on historical aspects of the Korean motion picture industry. It only lasts about half an hour. Presumably, the Spanish commentary by Jesus "Pecos" Olvera, the editor of Al Borde, is more of an explanation of the movie at hand because it goes on through the entire program. Sadly, I don't speak Spanish and this feature is not subtitled.

FINAL THOUGHTS:
A good presentation for a not so good film. The Uninvited is dull and overly long, lacking honest scares or any sort of creep factor. Instead of renting this film, turn the box over and try one of the better movies the production company compares it to on the back. Skip It.