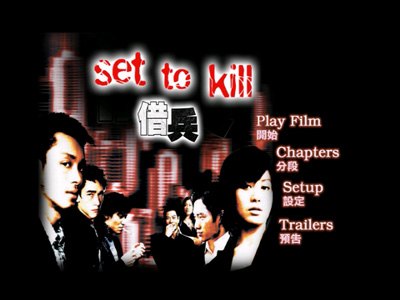 The thing about a femme fatale is, though she has style to spare, she also has much more substance. A good femme fatale in any classic film noir has a pretty good plan up her sleeve, along with a gat to back it up.

Marco Mak's 2005 movie Set to Kill (Tse Bing) isn't intended to be an homage to film noir, but I realized halfway through that it took its plot from one. Connie (played with frustrating charm by Jing Ning Chinese Odyssey 2002) is the femme in question, and instead of a private eye, she's running emotional rings around her underworld bodyguard and former boyfriend, Nick (Ho-Yin "Raymond" Wong, 49 Days). There's a scene where she once again is telling him her side of the story, and it's all getting rather dizzy. Nick doesn't know what to believe, he just knows that people have stopped living up to his expectations and that he's going to have to do something about it. That, dear reader, is a very noirish predicament.

The plot of Set to Kill, the one Connie is so desperate to control, revolves around money laundering. Connie works at a prestigious bank with her fiancée, Billy (Sze-Ming Lu), and she's discovered someone is filtering out cash. When a sniper takes a shot at her, it becomes apparent that the triad boss who the money belongs to thinks she's the culprit. The couple go to Uncle Ghost (Siu-Ming Lau), an aging gangster who agrees to loan them a crew of his people while they sort it out. Billy requests Nick, whom he knows was once connected to Connie. The audience's eyebrows are raised, even if no one in the movie stops to ask why.

Nick's crew is rounded out by the too-cool-for-school Big Brother (Ting Yip Ng), girl crazy Flyer (Carl Ng), and ass-kicker Lisa (Yat Ning Chan). Lisa is brought along so that her womanly touch can set Connie at ease, but it goes to show how little Nick understands about the world he stumbles through. He once dated Lisa, too, but in this case, he broke up with her. Naturally, the two women aren't going to get along.

Everything is in place for a hardboiled crime story with some exciting gunplay. If only Mak (Cop On a Mission) had spent more time studying the old classics, that might be what we'd get, too. Instead, he missed that whole thing about having something to back up style. Set to Kill looks good, there's no doubt about that, even if the style is a tad bit CSI: Miami. Everything is illuminated by neon, the overexposure creating a hyper-reality. The problem is, the plot is lit the same way: too bright, more sheen than sense. There are lots of twists and turns, and in the final stretch, there are a couple of good surprises, but Mak doesn't know when to stop. Chop off the last ten or fifteen minutes, and Set to Kill would have an ending that cynically subverts the noir paradigm; however, at its full 94 minutes, the narrative has several twists too many. I stopped caring who was double-crossing whom, it was all too ludicrous.

This shaky plot is underscored by other bad style choices. The annoying musical score plays nonstop, its synthesized rumblings taking all the bite out of the shootouts. There is an excessive use of slow motion, as well as an odd effect where instead of showning authentic gun blasts, sometimes they look like they were digitally added in. And what was up with those title cards for the different characters that kept popping up for the first half hour?

Action-wise, we do get a handful of good moments. Most notably, the gunfight in the mall, where Flyer slides backwards down the escalator railing while firing his pistol. Other times, like in the kitchen after the glamorous banker's gala, there's a little too much comedy, such as Lisa's lettuce head decoy. Still, when the guns do go off, Mak rouses up some excitement, and Connie's machinations (and wigs) can be a hoot to watch. It's just too bad Mak couldn't connect the dots of Set to Kill a little more smartly, then we could have had a crackling crime picture on our hands. 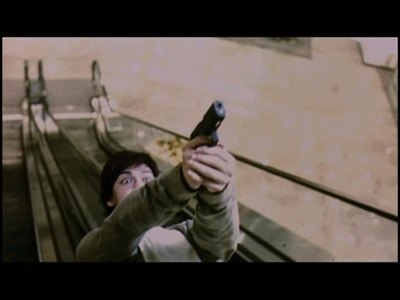 Video:
No aspect ratio is listed, but Set to Kill is blessed with a fairly nice anamorphic widescreen transfer. Mak's urban landscapes are often intentionally washed out, and the picture quality showcases a nice contrast between the sun-drenched outdoors and the more polished interiors.

Sound:
The original Cantonese language track is presented in 5.1 surround, while the Mandarin dub is in two-channel stereo. Where the mix on Set to Kill really shines is the sound effects. The gunshots in particular get a forceful pop that emphasizes the deadly nature of the action.

There are two Chinese subtitle options, and then the English. It's a mid-ground translation. There's nothing too embarrassing, but at times a writer with a better handle on colloquialisms wouldn't have hurt. Then Flyer would say "magazine" instead of "tabloid," and Connie would have a nastier name to shout angrily at Uncle Ghost than "You rascal!" (I feel like a broken record when it comes to this aspect of reviewing Chinese films, but really, it's important!)

Extras:
None, except some trailers when the disc loads and some more accessible through the main menu.

FINAL THOUGHTS:
In the end, I tepidly suggest Rent It when it comes to Set to Kill, mainly for the occasional bursts of action and Jing Ning's alluring performance. Perhaps this film is one that could benefit from a Hollywood remake. Get someone like Michael Mann to take the original script, punch up the bits that work, and we could have the thriller Set to Kill was intended to be. If that happens, you and I can tell everyone we knew the film when. 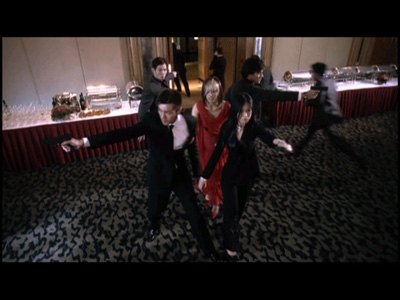