Ah! My Goddess - In Your Eyes 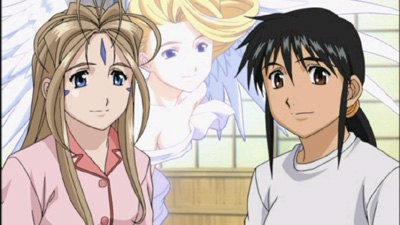 Continuing the Ah! My Goddess television series on DVD, volume 5 (In Your Eyes) ends up being a significant chunk of the overall story. Of the four episodes on the disc, three of them tie directly together, maintaining the sitcom-style episodic nature of the show while letting the events have real consequences that carry over from one episode to the next and onward into the future of the series.

When we left the characters in vol. 4, Keiichi had very nearly confessed his love to Belldandy during a moonlight rendezvous that would have tied their hearts together forever. This is, of course, something that can't really happen as long as the show is running, as the tension between the two is the crux of the serial. Belldandy, for those who don't know, is the Goddess of the title, and she is currently living on Earth with Keiichi. Joining her are her sisters, the sassy sexpot Urd and the mechanically inclined Skuld. The fundamental differences between the divine and the mortal provide the animators with an endless well of comedy, while also giving them their dramatic dilemma. Keiichi and Belldandy love each other, but can Heaven and Earth ever mix?

In Your Eyes is comprised of episodes 19 through 22 of the Ah! My Goddess series.

"#19: Ah! Please Don't Look at Me Like That!?": Carrying over from the previous DVD, everyone has returned home after the beach vacation. Urd is still upset with Keiichi for not carrying through with telling Belldandy how he feels, and so she attempts to give him a potion to make him more bold. A mix-up causes Belldandy to take the magic, and it ends up turning her a bit, shall we say, slutty. Urd wants them to couple, so she follows them around trying to create situations to bring them together, while Skuld doesn't want to share her older sister, so she tries to keep them apart; meanwhile, Keiichi, oblivious to why Belldandy is suddenly acting so randy, tries to do the right thing. The episode's climax provides one of the genuinely sweet moments that Ah! My Goddess is known for, while the Urd/Skuld duo deliver some good laughs.

"#20: Ah! If You're a Real Man, Save the Goddess?": Urd and Skuld have to return to Heaven to perform some community service or somesuch. Afraid that the dirty human will make a move on Belldandy while they are away, Skuld leaves Keiichi some spiked flan. He eats it, and it turns him into a girl. When he and Belldandy search for an antidote, it makes Belldandy sick. In trying to save her, Keiichi's faith is tested, and Belldandy's inner angel is revealed. The other sisters also come home early to help him.

"#21: Ah! What Wouldn't I Give for an Angel with White Wings?!": More is revealed about the angel concept introduced in the previous episode. All Goddesses have an angel living inside of them, a sort of helper and guardian that aids them in times of need. Skuld is too young to have hers, but she wants it badly, and she sets out on schemes to speed up the process. Urd, on the other hand, has suppressed her angel, because the creature manifests with the half of her that is also a demon. When Skuld's plans go wrong, Belldandy helps Urd reconnect with her spirit. She does it all to save her sister, revealing added depth to the Urd/Skuld relationship. The animation for this episode is some of the best of the series. The scenes with the angels, as well as the gray-toned flashbacks, are beautifully rendered. This episode also ends on an important cliffhanger regarding Urd's powers being suspended because she abandoned her post when Belldandy was sick.

"#22: Ah! The Devil's Whisper Coming from an Urn?": Marller, the demonic thorn in the girls' sides, has returned with a new scheme. He wants to awaken the Lord of Terror. He gets more than he bargained for, however, because it turns out that the Lord of Terror is Urd. Depressed over her suspension, this bit of news comes at just the right time for Urd. She embraces her evil side, and the first attack she launches on existence is focused on Keiichi's house. I don't want to give away anything more, but the disc ends on a cliffhanger with everyone's lives being significantly changed.

One thing that really struck me about In Your Eyes is how focused it was on the core characters. The supporting cast barely makes an appearance in most of the four episodes. At this point in a series' lifespan, it's easy to tread water, letting outrageous plots like Keiichi becoming a girl be the norm. It's refreshing to get a fifth volume where the characters and the story are all moving forward.

Additionally, Ah! My Goddess continues to be one of the better series as far as quality and consistency of animation. The episodes never take a dip, they always look good. There is a scene in episode 20 where Keiichi is on the rooftop of the tallest building in the city, and the skyline that surrounds him is exquisitely detailed. Occasionally, the animators use some digital effects, but it's usually for isolated moments of magic, and the contrast between those moments and the regular scenes makes them seem all the more special. 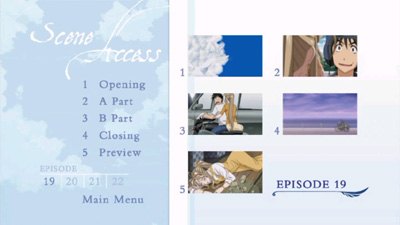 
Ah! My Goddess is always treated well by Anime Works. They've released this DVD with 1.85:1 anamorphic widescreen transfer that has gorgeous colors and no discernible flaws.

Sound:
There is a 2.0 mix for both the Japanese language track and the English dub. I prefer the original language, but I will give it up to Anime Works: my random sampling of the dub track gave me the impression that this is one of the finer dubs out there. The vocal talent seems a cut above what I've heard on most other anime, managing to maintain the feel of the original voices.

Naturally, there are also English subtitles, and they are nicely done, very easy to read.

Extras:
There are only a couple of extras here: a gallery of character model sheets and four trailers for other anime. Well, three trailers, actually. Both the Teknoman and King of Braves trailers go to the same Teknoman teaser. Neither of those properties seemed like an obvious match for the Ah! My Goddess audience anyhow. The other two, Sukisho and Midori Days, seemed more in line with the series, and of the two, I was actually pretty intrigued by Midori Days. It looked like it's about a kid whose hand turns into a green-haired girl. Truly bizarre.

FINAL THOUGHTS:
Highly Recommended. Ah! My Goddess is a rarity among anime series in that it actually appears to get better as it gets going. While this volume was a little lighter on the schmaltzy romance Goddess fans love, it makes up for it by keeping the overall story moving and deepening the principle characters. Ending on a cliffhanger like it did has made me anxious for volume 6. 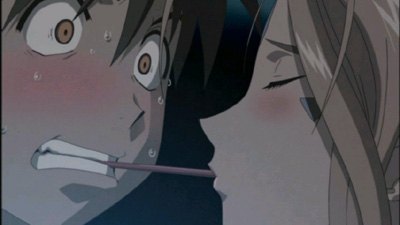