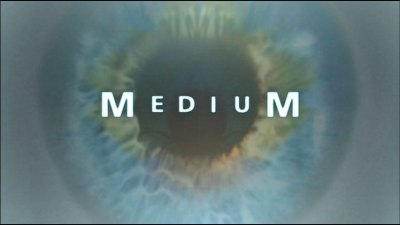 I've spent so many hours being bored by potentially "spooky" network dramas that I've ended up pretty skeptical of the whole undernourished sub-genre. (Anyone ever seen The Ghost Whisperer? Good, don't.) So when I heard that Patricia Arquette, Miguel Sandoval, and Jake Weber were set to star in a new series called Medium, my reaction was this: "Hmm, good cast, interesting enough concept, I suppose. If the network and the masses like the thing enough to grace it with a second season, then I'll be sure to catch Season 1 on DVD." 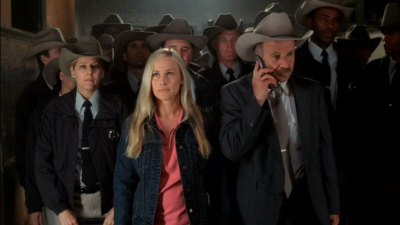 And now that I've fulfilled that promise ... I'm pretty darn psyched for Season 2 (which hits DVD this October). Glenn Gordon Caron, creator of Moonlighting takes a simple enough concept (an everyjane mom who has some pretty powerful extra-sensory powers does what she can to help the Phoenix D.A.'s office from keeping nasty scumbags off the street), and finds success by infusing the series with a lot of real and disconcertingly insightful "people moments," sequences that might not necessarily have a whole lot to do with the mystery of the week, but go a long way towards creating some interesting, well-rounded, and multi-dimensional characters.

Ms. Arquette, a recent Emmy winner for her work in Medium, is the absolute anchor of the show. Struggling to pay enough attention to her loving family while desperately trying to make a difference by assisting the good guys, Arquette's Allison Dubois is a hero really worth rooting for. And for a "based on a real person" series that deals with a woman who can see and communicate with the dead, who'd have guessed that the "stay at home mom" moments would be some of the series' most compelling? With a loyal-yet-frustrated husband and a trio of young daughters, the Dubois household is, basically, one of the most realistic TV families on the air right now. 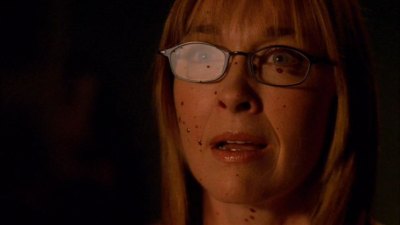 But when Medium focuses on Allison's precognitive dreams and her various run-ins with the nastiest killers in Phoenix, the show can be as dark, compelling, and intense as your favorite Hollywood thrillers. Medium simply strikes the perfect mix between character moments and the "plot of the week" adventures, and the combination makes for a seriously entertaining time. It's smartly written, with evocative production design and clever editing tricks, full of strong actors saying unexpected things. And yes, it's a little bit creepy, too...

Caron, a canny TV producer if ever there was one, is well aware that the more "normal" these characters are, the more the audience will be able to "buy" the extraordinary stuff. The A (crime-solving) & B (family life) stories complement one another quite effortlessly, and there doesn't seem to be one scene in one episode that you could call an empty time-filler. Plus, some of the crime-story stuff is seriously compelling and often gruesome, so when the warmer family moments arise, they're quite welcome indeed. 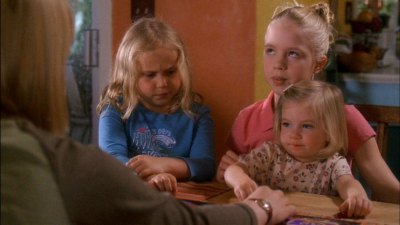 So the concept is cool, the teleplays are tight, and the show is about as well-directed a TV series you're ever likely to see ... but Medium's true power lies within its cast. Arquette, as I said earlier, is simply excellent, but she's flanked by three guys and a few little girls, all of whom get their fair chance to shine. As the admirably patient but understandably harried husband, Jake Weber delivers some of the best work he's ever done. As the hard-nosed but kind-hearted Phoenix D.A., Miguel Sandoval is as great as always, and a guy I don't know much about called David Cubitt does some terrific work as a detective with a few unpleasant skeletons in his closet. Toss in a few little kids who actually look (and talk!) like real-life little kids and a handful of groovy guest stars (most notably Arliss Howard, Ryan Hurst, and Kathy Baker), and you're talking about a 16-episode inaugural season that absolutely flies by. (And I hear Season 2 is even better.)

Disc inventories are as follows, with plot synopses snagged from the slim-pack DVD cases and *asterisks* next to my very favorite episodes:

#1 Pilot* -- Wife, mother, and psychic Allison DuBois can communicate with the dead and is convinced she can use her gift to help solve crimes. She's put to the test when she gets a call from the Texas Rangers.

#2 Suspicions and Certainties -- Now working for Phoenix District Attorney Manuel Devalos, Allison is brought in to help with jury selection in order to help convict a killer. But later, she worries the police may have the wrong man.

#3 A Couple of Choices -- As Joe wonders how to plan a surprise party for his psychic wife, Allison is partnered with Detective Lee Scanlon in order to hunt down a serial killer targeting young newlyweds.

#4 Night of the Wolf -- Her dream of being chased by a wolf starts to make sense when Allison hears the witness to a murder give an inaccurate description to a sketch artist. Daughter Bridget announces she has a new friend ... a boy who died five years ago.

#5 In Sickness and Adultery* -- Not only does Devalos want Allison to perjure herself on the witness stand, but a psychic warns her that there is trouble brewing in her marriage.

#6 Coming Soon -- Allison is positive that a solid citizen is actually a serial killer haunting her dreams. And she and husband Joe prepare for the fact that she might be pregnant.

#7 Jump Start* -- Allison is surprised when a girl who committed suicide by jumping off a cliff turns out to have been blackmailing an attorney ... the same lawyer who tried to expose Allison's gift in court.

#8 Lucky* -- Relieved that her brother Michael is safe and back from military service in Afghanistan, Allison wonders whether he can also communicate with the dead.

#9 Coded* -- Joe and Allison are concerned that eldest daughter Ariel may have inherited her mother's gift. Her recurring dream of a young girl being held captive in a castle turns out to have a basis in fact.

#10 The Other Side of the Tracks -- A professor specializing in paranormal phenomena tells Allison that her dream of two boys running toward railroad tracks happened to him and his late brother ... a boy believed murdered, but who Allison thinks is still alive.

#12 A Priest, a Doctor and a Medium Walk Into an Execution Chamber -- Although they witnessed the execution of a convicted drug lord, Allison and the police are shocked to discover his "ghost" may have murdered his girlfriend ... a murder caught on camera.

#13 Being Mrs. O'Leary's Cow -- If she implicates a cocky airline pilot in his wife's murder, Allison is terrified that the plane he is scheduled to fly may crash.

#14 In the Rough* -- When Joe's mother comes to visit, Allison is visited by the ghost of Joe's father. A murderer Scanlan and Devalos sent to prison years ago may go free if Allison reveals the truth about his case.

#15 Penny for Your Thoughts -- Allison does battle with an evil spirit from the past who takes over the minds of doctors. Meanwhile, Ariel's math teacher accuses her of cheating.

#16 When Push Comes to Shove, Part 1 -- Captain Push, who Allison met in Texas, comes to Phoenix in order to help the police find a serial killer. But Allison is concerned when he has a health crisis and surprisingly appears in her dreams.

Bottom Line: I was as skeptical about Medium as I am about mediums in general, but I guess that's your reward for having an open mind: Good, smart, very entertaining stuff.

Video: The episodes are presented in a seriously impressive anamorphic widescreen format, with picture quality that rivals a lot of big-budget movies. 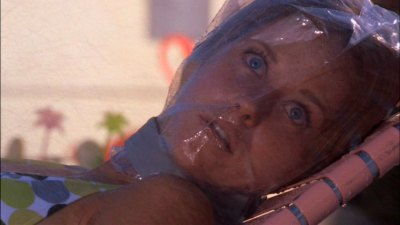 Disc 1 gives you the option to watch the original network pilot -or- an extended pilot that runs about five minutes longer. I watched the longer one, dug it a lot, and then moved on to episode 2, so I cannot comment on what was put back in to the extended cut.

Scattered throughout all five discs you'll find a healthy parcel of deleted scenes, just little moments that had to hit the cutting room floor, but are still worthy of a look once you finish the episodes.

The commentaries are gravy for the Medium fans, and kudos for spreading it out to include different crew members and all, but ... c'mon, nothing from Patricia Arquette? 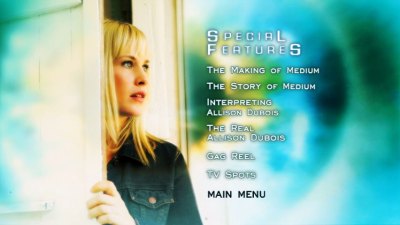 The Story of Medium runs just over 26 minutes and is another superlative piece of featuretting. Caron, Stark, Echevarria, Kelsch, Arquette, Weber, Sandoval, Cubitt, Vassilieva, Lark, writers Melinda Hsu, Chris Dingess and Moira Kirkland, and Mrs. Dubois sit down to explain how the adventures of a real-life medium were turned into one of the more realistic thriller-dramas on television. Focus here is on the concept, the writing, and the cast members.

Rounding out the supplemental section are a 7-minute gag reel and three TV spots, which represent a pretty impressive marketing push on NBC's part.

All that, plus Medium has a great credits sequence, some fantastic music, and a half-dozen twist endings that you probably won't see coming. Take it from a former skeptic turned ardent fan: The season set comes very Highly Recommended.