Philippe Gerbier (Lino Ventura), a man from the upper echelons of the French Resistance, is sent to a prisoners camp populated with political reactionaries, gypsies, and black-marketers. Someone has given his name to the secret police - but who? What do they know?

Philippe manages to escape and the man who has betrayed him is quickly located and taken to an abandoned house used by the members of the Resistance. A large rag is placed in his mouth. Soon the unknown man turns blue. He has suffocated in his own saliva. 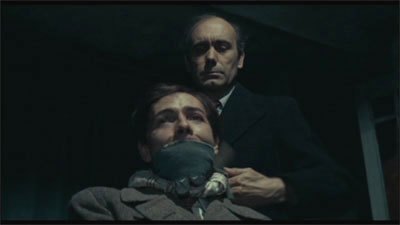 Based on Joseph Kessel's legendary novel L'armee des Ombres a.k.a The Shadow Army (1969) is arguably Jean-Pierre Melville's best film. Filled with unnamed characters, darkly-lit streets, men wrapped up in their trench coats, and plenty of suspense Melville's The Shadow Army is indeed one of the moodiest films you would ever see. Men exchange worn out suitcases, shake their hands, then disappear in the dark - no doubt The Shadow Army feels like an unusual gangster film pulled off the shelves of a forgotten library.

Much has been said about the favored by Melville moody, almost noir, camera work. Similar to Le Samourai (1967) and Le Cercle Rouge (1970) the storyline in The Shadow Army is saturated with so much mysticism (the heavy grey colors are indeed very appropriate) that there are moments when it becomes almost impossible to recognize all of the men on the screen. What Melville is concerned with is images.

Perhaps due to his personal experience with the Resistance Melville's The Shadow Army also remains a film of gripping realism. The intentionally slow pacing provides the story with an unusual feeling of uncertainty – the enemy is always invisible, quick, and deadly. Those who fall victims in this never-ending game of cat and mouse are quickly replaced with the next target, the next mission, the next destination. In The Shadow Army there is always something happening, way back there, in the shadows, where you can hardly even see.

Enjoying a legendary status amongst knowledgeable film aficionados Melville's The Shadow Army has been somewhat of a persona non-gratta in North America. Film distribs never truly embraced it mostly concerned with its difficult narrative and as a result to this day America is yet to see Melville's most talked-about film treated with the proper respect. Certainly the notorious dismissal by the French critics who tagged The Shadow Army as being a Gaulist-propaganda did not help either. Regardless, 37 years later after a meticulous restoration encouraged by the French Ministry of Culture Melville's masterpiece looks and sounds better than ever. Could a North American release be finally on the horizon?

There have been ongoing speculations that a Criterion release of Melville's masterpiece would be a great addition to the already published Le Samourai and Le Cercle Rouge. Yet, nothing has come out! In Europe however the film underwent a long restoration process and it seems like last month those who aren't fluent in French (unfortunately the previous two French releases were not English friendly) finally got their wish granted: The Shadow Army was released in Holland and Spain amongst other countries offering the newly restored French cut.

Presented in its original aspect ratio of 1.85:1 and enhanced for widescreen TV's the film looks stunning. I would never disregard a Criterion release without seeing it first (if such indeed materializes) but looking at what Studio Canal have provided for this Spanish disc I would be very surprised if a R1 release offers any substantial improvement in terms of video quality (let's not forget Criterion's annoying tendency to "adjust" the colors on Melville's films). What we have here is a magnificent progressive PAL print with beautiful colors, excellent degree of contrast, and some good film grain during the night scenes. The image is also crisp and cleaned up so well that as I mentioned above I do not see what else can be improved here. Perhaps a tiny tweaking here and there or some contrast manipulations but as far as I am concerned this disc looks simply way too good for any serious fan of Melville to pass it hoping for something better. Last but not least I am pleasantly surprised that edge enhancement is virtually nowhere to be found on this disc (in contrast with a few recent Studio Canal discs which I received last month). This is a great package folks! PAL-encoded, Region 2.

The film comes with an equally impressive audio presentation which I believe must have undergone the same detailed restoration. Sound quality is crisp and clear and there is hardly anything here that I can be dissatisfied with. Presented with its original 2.0 mono French track and an optional 2.0 Castellan dub this Studio Canal release also offers a number of additional subtitle-tracks: Castellan, English, German, Finnish, Swedish, Danish, Norwegian, Portuguese, Polish, Czech, Hungarian, and Dutch.

The only two extras found on this DVD are the original theatrical trailer for the film and a gallery of stills.

Melville's best is finally available in an English-friendly form!! Considering the spectacular image quality as well as the very decent and affordable price tag there is NO reason for you to wait: HIGHLY RECOMMENDED!