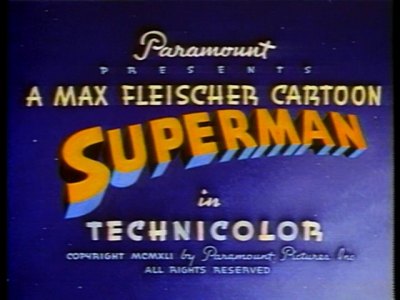 As many people know, Superman first appeared in Action Comics #1 dated June, 1938.  This character not only possessed super strength and speed, but he had the ability to sell a lot of comics.  (It's interesting to note that the publisher thought the character was too unbelievable and didn't like the cover of this first appearance that portrayed Superman lifting a car.  Because of this Superman appeared only on every third or fourth cover of Action until the publisher discovered that the covers with Superman on them were selling twice as many copies as those without.)  In February of 1940 the Man of Steel took to the airwaves with his own radio show which, like the comics, turned out to be incredibly popular and ended up lasting over a decade.

Wanting to cash in on the popularity of the man from Krypton, Paramount Pictures approached the Fleischer animation studio (run by brothers Max and Dave Fleischer) and asked them to make a series of Superman cartoons.  The Fleischer's had been making Popeye cartoons for years and following in the path of Walt Disney had recently released their first feature length animated film, Gulliver's Travels.  They were working on their second feature, Mister Bug Goes to Town (rereleased as Hoppity Goes to Town.)  They didn't really want to take on another short subject series, so the brothers told Paramount that they would need $50,000 per episode, or about three times the budget of the average animated short, in order to make the series.  To their surprise, Paramount agreed. (The cost of these cartoons varies widely depending on which source you use.  I've used the number included on the insert.) 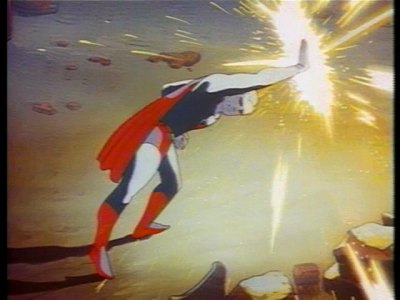 There were 17 Superman cartoons made, all in Technicolor, between 1941 and 1943.  The first nine had the direct involvement of Max and Dave Fleischer, and the last eight were made after their studio was taken over by Paramount and the brothers left the company.

These shorts, collectively known as the Fleischer Superman cartoons, are some of the best theatrical cartoons ever made.  Stylish and exciting, they were a welcome change from the anthropomorphic comedy shows that made up the vast majority of animated shorts at the time.  The Superman of these cartoons moved realistically and very fast.  From a standstill he would leap into the air and be flying at top speed before he even had time to leave the frame.  While fighting giant robots or monsters his moves were smooth and sure, and he radiated an aura of confidence and power. 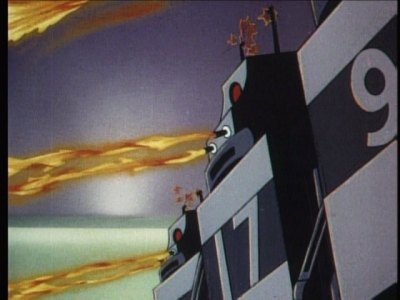 The first nine cartoons are the best in the lot, and show Superman at his best; fighting outlandish creatures and scientific menaces.  It's impressive to see this hero take on an earthquake machine and a building destroying bullet plane.

The last eight shows were made on a drastically reduced budget but are still a lot of fun, though not nearly as good as the first cartoons.  In these later episodes Superman's enemies are now saboteurs and spies rather than the stuff of science fiction. They lack some of the pizzaz of the earlier ones but they are still quality cartoons.

While these shorts don't produce much suspense for modern audiences, you know that Supies will capture the villain and save poor Lois in the nick of time, they're still a great ride.  Even 65 years after they were made the Fleischer Superman cartoons are as exciting and fun as they were when they were first released.  These shorts are able to capture the sense of adventure and awe that is missing from many other versions of Superman, most notably the 1950's TV show.   These are true animated classics.

All seventeen Fleischer Superman cartoons come on a single sided DVD in a standard keepcase.

These cartoons are in the public domain, and as such they've been released countless times on VHS, laser disc, and DVD.  Some of the versions have been horribly bad with faded and blurry pictures and muffled sound.  Being a huge fan of these cartoons I have two earlier releases; The Superman Cartoons of Max and Dave Fleischer that Image released and Bosko's Diamond Anniversary Edition entitled The Complete Superman Collection.  Of the three, the Bosko version is the best, with high quality transfers mastered from 35 mm prints.  Unfortunately this current VCI release is the worst of the three.

Still much better than the budget discs released by public domain companies, this disc leaves a bit to be desired when compared to the other two DVDs in my collection.  The image is very soft and almost blurry in parts.  The lines are not solid and tight.  The colors are bright but they are not solid, with several different shades appearing in what should be a single color.  There's also movement in backgrounds that contain a single color like sky scenes.  The image itself is a bit too bright also, with some fine details being lost.


On the positive side, the cartoons are clear and free from most print defects.  They are generally easy on the eyes and not nearly as bad as some versions I've seen.

One last thing that should be noted is that the beginning of Terror on the Midway has been altered.  The only surviving original 35mm print has a scratch down the middle of the image in the opening sequence; a slow pan across a circus scene.  Instead of showing the scratch, VCI decided to present a series of still images that don't have the flaw in them.  This changing of the creator's intent is a flaw that's more serious than the original marred frames.

The two channel mono soundtrack sounds fine.  There isn't a lot of range and the track does crack a bit in some of the louder scenes, but this is a minor flaw.  The dialog is easy to hear and, more importantly, they did not add any extra sound effects as some versions have.

This disc also has a war time parody of Superman done by Warner Brothers, Snafuperman.  The video quality of this is significantly worse that the main cartoons, but it is watchable.  In addition to that there's a trailer for the Superman Serial staring Kirk Alyn, which has seen better days, text bios of the stars and a series of "fun facts" about each cartoon.

The most interesting bonus item is a 20-minute telephone interview with Joan Alexander who voiced Lois Lane in the cartoons as well as the radio show.  Her reminiscing about the early days of radio are very interesting and well worth listening to.  The audio is a bit rough, it has a slight metallic sound to it, but her voice is clear enough.

There is also a nice fold out insert with an essay about the cartoons.

These are a great set of cartoons, real classics that all animation fans should make sure to see.  The video quality is very good, but not the best out there.  The image is pretty soft and a bit too bright.  While better than the cheapie discs, the Bosko Diamond Anniversary Collection (available for about the same price) looks significantly better.  The cartoons them selves are very highly recommended, while this particular disc is worth renting for the bonus items.
Note: Reader Arron S. e-miled to let me know that Warner Brothers is currently doing restoration work on all 17 Max and Dave Fleischer Superman cartoons for inclusion in a mega box set to be released later this year. That should be worth waiting for.