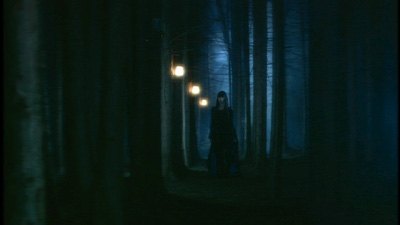 Ai Yazawa is one of the more distinctive voices to emerge from the rather large Japanese comics market. Readers of her manga series Paradise Kiss and the genre classic Nana (both currently available in the U.S.) have come to appreciate her unique obsessions: cute boys and struggling girls, fashion, British rock 'n' roll. Her stories are free-wheeling soap operas, full of humor and romance. All of these elements are on display in Ken Nikai's adaptation of her book Last Quarter, but with an added supernatural twist.

Last Quarter is the story of 19-year-old Mizuki (Chiaki Kuriyama, Kill Bill's schoolgirl assassin, Gogo). At her birthday party, her best friend Aya shows her some cell phone footage of her and Mizuki's boyfriend, Tomoki (Hiroki Narimiya, also in Nana), doing dirty things. This triggers something, allowing Mizuki to see a haunted mansion near her home for the first time. Inside, someone is playing a guitar, and the enchanting melody draws Mizuki in. She knows she has heard it before, but she doesn't know where. Once in the house, she meets the mysterious Adam (Japanese rock star Hyde), who tells her he wrote the song for her--which is strange, since they've never met before.

Mizuki's connection to Adam is the mystery that Last Quarter is built around. It's a ghostly curse that spans two decades, and it also draws in a young girl named Hotaru (Tomoka Kurokawa). She has an accident at the same exact time as Mizuki, and they cross paths on an otherworldly plane. Hotaru enlists her friend Miura (Motoki Ochiai), and along with Tomoki--who now regrets everything he has done--they begin to unravel the mystery of the mansion and the dark and brooding guitar man in order to free Mizuki from the hands of fate. What in Adam's past broke his heart so badly that not even death can hold him? What about Mizuki's troubled home life made her susceptible to his spooky charms? And what about that song?

I'm torn about my feelings about Last Quarter. It's not great cinema, by any means. In fact, its greatest failing is its production values, which at times could be compared unfavorably to a Lifetime cable movie. Some of the special effects are downright cheesy, being little more than blurry time-lapse photography; these scenes become all the more baffling when we see cool effects like Miura's explanation of the lunar cycle midway through the film. A little more consistency would have been nice. Also, Hyde is somewhat laughable as the Byronic hero, sitting alone in a darkened forest playing his guitar. His music video is cornball to the extreme: he stands on a cliff, staring at the sea and belting out a heartfelt tribute to lost love. Granted, he's meant to be a singer in the '80s, and so it's pretty right on, but even so.... 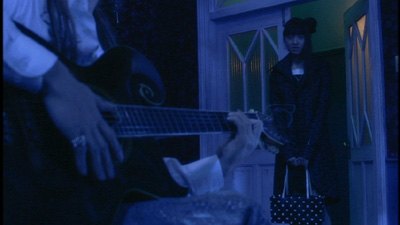 The thing is, I really enjoyed Last Quarter despite myself. Nikai has captured the nature of Ai Yazawa's stylized fairy tales, maintaining her loose cannon storytelling style, even down to the ominous prologue and epilogue that do more to enhance mood than they do the plot. (Go to the end of the credits for the last scene.) It's sappy and it's goofy and the mystery isn't all that deep, but it doesn't really matter because it's also romantic and endearing. When we're in the spiritual realm that surrounds the mansion, Last Quarter has the feel of a gothic romance. We're no longer in Japan, we're in Wuthering Heights, with Adam standing in as a pretentious rockstar version of Heathcliff. For as silly as the Adam character comes off, he's balanced by Narimiya, who is totally crushable as Tomoki, a mod who looks like he just stepped off of a Quadrophenia poster. Decked out in tailored suits and a patch-laden parka and riding around on a scooter that has more mirrors than there are roadside angles to view, he's just too cute to stay mad at for being a cheating cad. I was rooting for him to rip that awful fur coat right off of Adam's back and take back the woman he loves!

You see, Tomoki just makes a good match for Mizuki. The best parts of the movie are the flashback to their teenage romance. Chiaki Kuriyama may be known for playing badass girls in Kill Bill and Battle Royale, but she's just as good when it comes to being sweet and nice. When she builds her boyfriend a sandcastle on the beach and plays a girlish trick on him to show him his future (basically, getting him to peer through its door to see her on the other side), it's absolutely adorable, capturing that special blush that comes with first love.

So, standards be damned. Last Quarter may never get an issue of Film Comment devoted to it, but sometimes I just want to eat a pint of ice cream while a film tugs on my heartstrings. In that sense, Last Quarter finishes in first place. 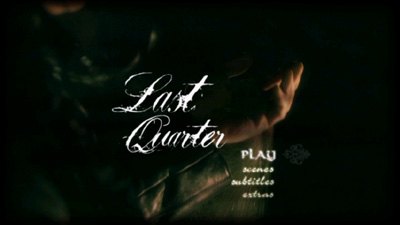 Video:
No aspect ratio is given, but Last Quarter is given a nice and wide letterbox transfer enhanced for 16X9 televisions. The colors are nicely contrasted. It's particularly noticeable in the effects scenes with special color palettes. All in all, a totally solid presentation.

Sound:
Not an overly fancy mix, but a nice use of digital surround. There were some good effects in my back speakers, including some off-screen shouting near the end that made me think someone was outside my window for a second. The subtitles are in yellow, and they flow nicely while also being easy to read.

Extras:
Only trailers--the Japanese trailer for Last Quarter and three other films available from its U.S. distributor, Geneon. It would have been nice to see a feature on Ai Yazawa, especially as I don't believe the manga the film is based on is available in English as of yet, but I guess we'll have to wait to see if some enterprising publisher picks the book up. (And if you need a scriptwriter for it, my e-mail is available on this site! ;) )

FINAL THOUGHTS:
Recommended. Yes, Last Quarter may be silly and its production values aren't always top-notch, but as far as supernatural romances go, this one has great fashion and a charming couple in the lead. While it may be the cinematic equivalent of a cheap Harlequin novel to some, it will definitely hold some appeal to fans of Ai Yazawa's comic books or people who find themselves enjoying films like The Notebook even when it's against their better judgment. (And as dorky as the Adam character can be, Hyde still isn't nearly as bad as Ryan Gosling!) 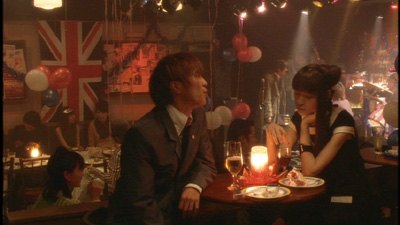