Anxious Animation is a collection of short animated films from the mid- to late-'90s by four different filmmakers (or six, if you count the trio of Henry Garon Ascher as individual members). There is no great thread connecting them; the title of the DVD is as close to a theme as you will get. All the shorts have some sense of anxiety or dread about them.

In any storytelling form, short subjects are a tricky business. It's not just a simple matter of adjusting your running time to fit the format, the creator has to adjust his or her approach, making choices for economy, searching for the smaller slice of life that will have immediate poignancy. There is no room for excess, and yet it's actually quite easy to have too little.

When it comes to animated films, the approach is often to go experimental, as all the animators do on Anxious Animation. Traditional narrative is either eschewed or subverted, and style becomes the defining factor for each director represented on this disc. The problem then becomes whether the style is interesting enough to sustain the run of the subject. I am not an attention-deficit viewer by any means, but given a mixed bag such as this, the losers tend to be the ones that end up as more of a repetitive exercise than a piece that feels clearly defined. 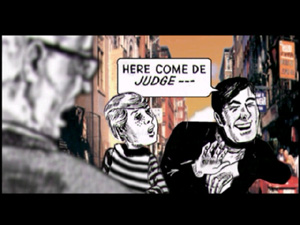 Henry Garon Ascher: The animation collective of Eric Henry, Syd Garon, and Rodney Ascher have three selections on Anxious Animation, and they are by far my favorite. Part of it might be that at least two of them were made as music videos, and so the marriage of image and sound seems more considered. It also probably helps that the song limits the space of time they have to work in, so their ideas have to be concise. For the hard metal of Buckethead's "The Wheel of Torment," they take the guitarist's nutjob image and recontextualize it by placing the musician in Hieronymus Bosch's nightmarish paintings, giving viewers a quick tour through hell. (From 2004, it's the most recent of the films here.) Working with DJ Q-Bert's hip-hop collage, "Sneak Attack" is more gonzo, incorporating B-grade sci-fi images, old school animation styles, and day-glo video games to create a fun, high-energy piece.

The trio's use of sound really comes to the fore in "Somebody Goofed," a quickie that brings a Jack Chick religious comic to cartoon life. Using snippets of songs by bands like the Beastie Boys and Moby, they undulate the tunes with the mood of the propaganda, thus waving away the whiff of irony that could have stunk up the piece. The art style also pulls in many disparate sources, putting Chick's scratchy drawings against photographed backdrops, as well as cutting and pasting photos for the film's "extras." It's nicely done, and if it's an accurate representation of the original booklet, it's hard not to think Chick and his cohorts (is there a real Jack Chick?) might be more than a little wrong in the head. 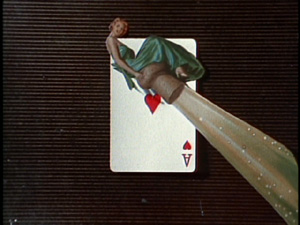 Lewis Klahr: Klahr has three films on Anxious Animation, all done in a cut-and-paste style, and each to varied results. "Lulu" is the middle, and is largely forgettable. "Altair" is probably the best feature on the DVD. Using images from old pulp magazines and a playing card motif, Klahr tells the story of an alcoholic love affair, setting its highs and ultimate low to a classical orchestration by Stravinsky. The playing cards are used to show mood: when it's the ace of hearts, everything is hunky dory, and as the numbers get higher and the symbols darker, our drinkers head toward rock bottom.

"Pony Glass" has the dubious honor of being the most tedious cartoon on Anxious Animation. Clocking in at 15 minutes, it stretches a pretty tired concept far past its breaking point. Cutting up old Jimmy Olsen comics, Klahr takes Superman's pal through a series of sexual escapades, from the rush of young love to the disappointment of betrayal to the freckled redhead's eventual capitulation to homosexuality. I just don't find the appropriation of other people's work (uncredited, no less) in order to warp the image for easy shocks to be progressive or dangerous, and if it doesn't work as subversion in these politically rigid times, I can't imagine how dull it must have seemed back in 1997, when it was made. 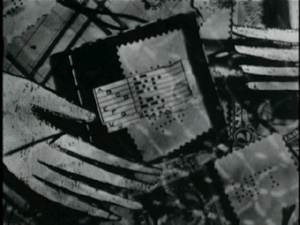 Janie Geiser: With two offerings on display, Geiser is the most guilty of working an interesting style choice into the ground. "Immer Zu" is a black-and-white espionage story about secret messages and clandestine rendezvous, and while some of its images are quite splendid, the overall piece could have used some tightening up. "Lost Motion" uses small metal figures and toy trains in a stop motion style, and the script appears to be about a man in search of someone. Really, though, I found "Lost Motion" to be rather uninteresting to look at and thus not very inviting to puzzle out. Again, maybe tighter editing would have helped. The whole film is dark and the rigidity of the figurines doesn't really lend itself to storytelling (though, I realize given the title that this is probably the point). I felt like I had gotten the sense of what Geiser was doing visually within the first sixty seconds, and the other 600 were like an awkward conversation where I couldn't figure out what to do with my hands. 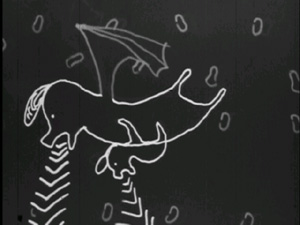 Jim Trainor: Trainor works closer to a traditional animation style than the others, hand drawing his pieces with ink pens on plain paper. His two selections also are the only ones with spoken dialogue. (Henry Garon Ascher use comic book word balloons in "Somebody Goofed," as does Klahr in "Pony Glass," though his are mainly filled with gibberish.) In both "The Bats" and "Moschops," Trainor creates cartoon nature documentaries, cracking open the concept by giving the animals the power of expression while boiling their actions down to their baser instincts. The result is crude, but the juxtaposition effective.

To sum up, Anxious Animation is an uneven artistic smorgasbord. Out of ten films, it hits the mark only about half the time. Animation fans may enjoy the overall package as a glimpse at the many styles available to individual creators, but if you're looking for more than just flashes of eye candy, you may want to keep searching.


The cartoons on Anxious Animation were either shot on video or 16mm, and they are given a clean full frame showcase here. The colors are nice, and the only glitches appear to be the intentional ones in Trainor's homemade pieces.

Sound:
Like the video transfer, there is nothing special about the sound mix. The soundtrack is almost exclusively music, and the disc has good volume without being either too muddy or tinny.

Extras:
Other Cinema provides viewers with a nice insert explaining who did what cartoon, including technical details and critical summaries. The DVD has a "play all" function so you can watch all the shorts straight through, but it doesn't bundle together the pieces by each filmmaker, it shuffles them up instead. If you wanted to watch each director one at a time, you can do that, as well, by selecting their name from the main menu.

There are also trailers for other releases from Other Cinema, and a short explanation about the companies goals and philosophy..

FINAL THOUGHTS:
Anxious Animation is not a total wash, but your results may vary; if you're curious about the experimental side of filmmaking, you may want to Rent It. There is likely little replay value, however, and some of the shorts are the reason the DVD gods gave us "skip" buttons on our remotes. Don't be afraid to use 'em. If you find your interest flagging, go with those instincts and move on to the next; let your trigger finger be particularly itchy if you're coming up on one of the films by Henry Garon Ascher, because if you're going to jump ahead to any, those will be the ones.