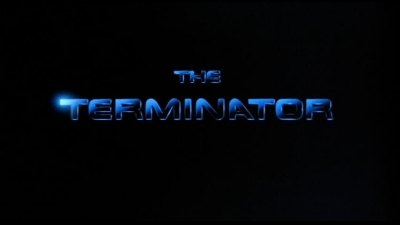 The Movie:
Like its namesake character, The Terminator is an indestructible dynamo that never quits. What by all rights should have been a cheesy B-movie starring an Austrian bodybuilder with a ridiculously thick accent and directed by one of Roger Corman's anonymous special effects technicians turned into a monster hit and a certifiable sci-fi classic that still entertains after innumerable repeat viewings. No one could have seen it coming in the fall of 1984, except of course for its cocky writer-director, but when the movie hit it left shockwaves that are still reverberating in the industry. This is due almost entirely to the perseverance, ingenuity, and yes brilliance of James Cameron. The film launched the director and his muscle-bound star onto the Hollywood A-list. After respective careers boasting even bigger hits, a handful of Oscars for notorious control-freak Cameron, and eventually the governorship of California for the big oaf with a funny name, both are now almost as unstoppable as their famous killer robot. 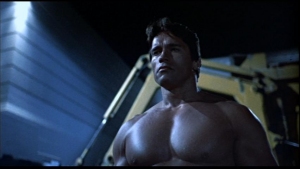 By this point, the film is so well-known and revered that it would be pointless to recap its plot. Suffice it to say that The Terminator is smartly scripted and tightly directed with an urgency that doesn't allow for a single wasted frame of film or unneeded line of dialogue. The movie was produced on a small budget but never lets that get in the way of delivering consistent thrills, and is extremely well-plotted without talking down to its audience or falling victim to holes in its own logic.

Famed science fiction author Harlan Ellison accused Cameron of stealing ideas from his writings in creating the basic concept of the movie, and after a lengthy lawsuit that finally settled out of court all subsequent prints and home video editions have included an acknowledgement to Ellison as the end credits come up. An indication of Cameron's feelings about this matter, the text rather snarkily reads, "Acknowledgement to the works of Harlan Ellison" and no more. While I would never deny an author the right to protect his works, the whole scandal rather strikes me as a case of sour grapes. I've seen the old Outer Limits episodes that Ellison claims were the basis of the film, and although there were some minor similarities in concept (hardly enough to qualify as plagiarism) it's clear that the achievement of The Terminator belongs entirely to James Cameron. The film was his baby from start to finish, and there's no point in begrudging him its well-deserved success.

Video:
The Terminator Blu-ray is encoded in High Definition 1080p format using MPEG2 compression on a single-layer 25 gb disc. The movie is presented in its theatrical aspect ratio of approximately 1.85:1 with tiny letterbox bars at the top and bottom of the 16:9 frame.

Of the initial wave of launch titles, this is one of the better-looking Blu-ray discs from Sony. Unfortunately that's not saying much, but I'll start with the positives first. MGM gave the movie a thorough digital scrubbing for its Special Edition DVD release in 2001, and that same master is the basis for this new Blu-ray. Keeping in mind that The Terminator will always be a low-budget film from 1984 shot on cheap film stock under makeshift lighting, the color transfer looks surprisingly clean and sharp. It's still a generally grainy, sometimes murky film, but the worst of the heavy graininess from previous video editions was cleaned up without the typical appearance of serious DNR artifacts or smearing. Black levels are solid with good shadow detail (Arnie's exposed penis is more clearly visible at the 5:25 mark than it's ever been). Colors look good and accurate to the production if not eye-popping. Some dirt is still problematic around the special effects sequences, but this is endemic to the optical compositing process used at the time and will always be part of the movie unless the studio ever goes to the expense of digitally erasing each speck. I don't count that as a video transfer flaw.

The problem is that the Blu-ray hardly looks like High Definition at all. In fact, in the majority of scenes it's barely distinguishable from the 2001 DVD edition of the movie. In direct comparison, there's a modest improvement in detail and clarity, especially in the brightest daylight scenes, but overall it still looks like a better-than-average DVD. Part of this may be due to the movie's photographic style, but the video also has a filtered appearance common to the other Sony Blu-ray launch titles. Using MPEG2 compression on a single-layer disc burdened by space-hogging PCM audio takes an obvious toll. Compression problems such as noise and frozen grain patterns are visible in some of the most difficult scenes like those hazy shots of the L.A. streets at night. For The Terminator this is certainly a nice transfer that looks as good as the movie ever has, but it's not much of an upgrade over the DVD at all.

The Terminator Blu-ray disc is not flagged with an Image Constraint Token and will play in full High Definition quality over a Blu-ray player's analog Component Video outputs.

Audio:
The movie's soundtrack is encoded in uncompressed PCM 5.1 format or in standard Dolby Digital 5.1. Unlike the DVD, MGM/Sony have not bothered to include the original mono soundtrack. All we get is the obnoxious 5.1 remix prepared in 2001. This is a huge oversight that's certain to upset film purists and many fans of the movie. 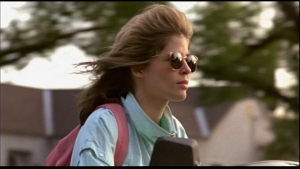 The problems with the 5.1 mix were well catalogued at the time the last DVD came out. Although the new mix opens up many scenes in a dramatic way, especially the future war sequences, the artificial shifting of sound effects and ambience around the soundstage is often gimmicky and distracting. The balance of the mix just feels off, drowning out certain cues that used to be integral to the fabric of the sound design (like Reese instinctively pumping his shotgun when awakening from a flashback nightmare). Audio producer Van Ling spent a lot of time and effort attempting to bring the movie up to current standards and make it more compatible with the sequels, but at the cost of sacrificing the original flavor of the sound. Worse, many of the original sound effects have been replaced by newly foleyed substitutes, and the decisions are often perplexing and ridiculous. The new gunshots don't sound anything like they used to, nor are they at all appropriate to the type of gun being used on screen. When Arnold kills the first Sarah Connor, the booming of his handgun used to be exaggerated for effect, but now comes out with an absurd pifft pifft pifft sound as if it had a silencer. What were they thinking?

For what it is, the PCM 5.1 encoding of the remix sounds pretty good, though not much different from the standard Dolby Digital. The fidelity of the original dialogue and sound effects (those not replaced, anyway) is pretty limited and doesn't gain much from the uncompressed format. The track is bassy as hell now, and that bass still comes out boomy. Directional effects are perhaps a slight bit cleaner, but the difference doesn't seem worth the expense of how much disc space the PCM track takes away from the video bit rate.

Extras:
All of the bonus features on this Blu-ray title are recycled from the DVD edition and are presented in Standard Definition video with MPEG2 compression. Only a few of the supplements from the DVD have carried over.

That's it for content related to the film, though we do get HD previews for three unrelated Sony movies. Missing from the DVD edition are the rest of the "Other Voices" documentary, Cameron's deleted scenes commentary, more trailers and TV spots, five still galleries (production artwork, on-set photos, and the original story treatment among other things), the DVD-Rom material including screenplay drafts and script-to-screen comparisons, and the hidden easter egg interviews.

No interactive features have been included, but it's worth noting that the Java-based disc menus can be accessed while the movie is still playing, much like the HDi menus on HD DVD discs. The booklet included in the disc case advertises a function called Blu-Wizard that allows you to "customize the way you watch special features to provide a unique viewing experience". The booklet instructs you to select "Blu-Wizard" on the disc's main menu, but in fact there is no such option anywhere on the disc that I could find. Whoops.

Easter Eggs:
Hidden on the disc is a selection of HD test patterns. You can access these by entering 7669 on your remote control from the disc's main menu. Use the Skip button to page through the patterns. Please note that due to an error in the Sony encoder used to author the disc, blacker-than-black and whiter-than-white portions of the video signal have been clipped, essentially rendering the Brightness and Contrast calibration patterns useless. 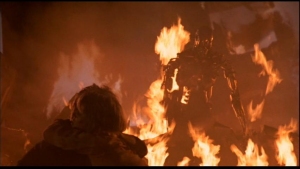 Final Thoughts:
The Terminator is of course a classic sci-fi action thriller with enormously high replay value. On that basis alone, this Blu-ray release is worth a recommendation, but be warned that the picture and sound are not much of an improvement over the DVD edition, nor have all of the bonus features been carried over.