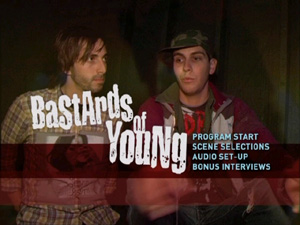 It's almost pointless to critique the music in Bastards of Young. I could easily invoke the spirit of the Talking Heads and declare it, "Same as it ever was," but I think that would be missing the point. Since rock 'n' roll began each passing generation has been able to look at the one coming up and declare them copyists while lamenting their own lost youth. It's a ridiculous cycle, and one that punk rock originally shot dead, only to turn around and zombify over and over again. The title of the film is taken from a Replacements song, after all.

Because, you see, this isn't about tags or critical acclaim or the past. Yes, the bands featured sound like a lot of older punk bands, and to untrained ears, a lot of them sound exactly the same as one another (though, if you think that, it just proves that, like me, you simply don't get it; set it aside, move on). Sure, they aren't going to get great reviews in the mainstream media, and major-label success may never be in their grasp. So what? Again, it's not about that.

What it is about is the groundswell, of the network that forms between kids looking for something to do on a Friday night and, in the larger scheme, a way to express themselves. The shapers of Bastards of Young know that if there is any connection to the first wave of punk, it's the DIY spirt, and it's the only connection worth exploring. Hartman follows the movement from basements in New Jersey to small clubs all over the country to the Warped Tour, corporate temptations, and back down to rediscovering what it was all about again. The story is told in equal amounts by interviews with the musicians and commentators, and by performances. Like the scene itself, the film keeps the barrier between fan and audience low. With a movement that relies so heavily on word of mouth (and in this era, the internet), there is no way you can distinguish between on stage and off. One kid sees a band and tells another kid about them, and after the second kid sees the band he forms his own, gets a support slot opening for the first band, becomes successful, and passes the love on down.

The people behind Bastards of Young deserve a lot of credit. I didn't really want to watch this documentary. Looking at the list of bands on the front cover, they fell into three categories for me: never heard of them, didn't care about them, and actively disliked them. Yet, almost from the starting credits, I was really digging this movie. The infectious feeling that keeps a subculture like this alive comes across, and when you see how much all the people involved are really enjoying themselves, you'll find it hard not to say, "Hey, rock on."

It's kind of funny, because punk has always been saddled with this aggressive image, like punk kids are angry and scary. You've never seen so many guys smiling while talking about music as the bands in Bastards of Young do. The lead singer of Thursday, Geoff Rickly, is such a genuine personality, it's easy to see why Hartman chose his band to open and close the picture. He begins it by explaining how it all started, and he ends it by showing the success you can have if you manage to keep your head. Midtown also impress, as they eloquently explain the pitfalls of being signed to a big label and the process of recapturing one's DIY spirit. 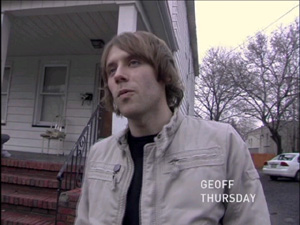 If there is any downside to Bastards of Young, it's that there is a distinct lack of an alternative point of view. I'm not talking about giving equal time to people who hate this music, but maybe opening it up to see if there is more of variety amongst the fans, and if not, why. Specifically, there is an obvious absence of a female point of view, even despite so many women working behind the scenes on the shoot. 90% of the population in Bastards of Young are sensitive white boys. Granted, it is called Bastards of Young, but there are a lot of girls in the audience, most notably in the line waiting outside the record store to see Taking Back Sunday. Because of the short shrift they receive, it's hard not to feel like they are little more than tools for writing more songs. Backstage at an Early November show, one of the band members sees a girl he knew from high school, and all he can do is bitterly joke about how she never made out with him back then, and frankly, he doesn't seem cool enough to make out with now, either. A caravan of Taking Back Sunday fans point at a girl hanging around them and note how evil her "species" is and claim their favorite bands exist because girls like her broke their hearts; her protests that she's been done as dirty by a guy as they have by a girl are steamrolled right over. It's a shame, too, because the other side has a lot to say if the female Thursday fan interviewed near the end of Bastards of Young is anything to go by. Of all the testimonials about what the music means to the individual, hers is the most emotional. A Thursday song about the death of Rickly's grandmother came at a time when her grandmother died, and it got her through the experience. So much so, she had the band's logo tattooed on her arm.

Still, even with that caveat, the joy of Bastards of Young wins out. The film can best be summed up by the segment where a young musician, Dave Melillo, travels from Florida to audition for California's Drive Thru Records. Melillo's wide-eyed and nervous, noting that his flight out was the first time he's ever seen mountains. When he's done playing, he is offered a deal with the label, the home of some of his favorite bands. Melillo is so overwhelmed, he has to sit down. His dream has become a reality, and the look on his face is the best reminder I can think of for what music means to so many people. It's why Bastards of Young exists, and why even if you aren't into the bands involved, you can still find plenty to like about this DVD. 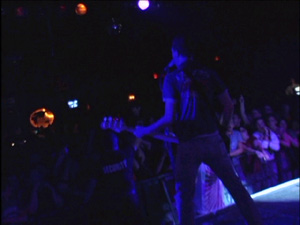 Video:
Presented in its 1.33:1 full screen aspect ration, Bastards of Young looks as pretty and new as it is.

Sound:
Two 5.0 sound mixes are offered. Occasionally, the sound in the live performances dropped back a little too much, but that could also have been my system. Overall, when the music plays, it's good and loud, which is the way you should like it.

Extras:
This area of the DVD should almost be labeled "fans only." Even though you might enjoy the main film without really liking the bands or the music, these bonus features might test your patience; however, if you're digging the scene, then there's a ton here for the likes of you.

Disc 1 has the unedited sit-downs with the various bands. Clocking in at 90+ minutes, it does make you appreciate what a good editor can do, especially when you realize some of the bands are a lot less charming without their banter cut down (From Autumn to Ashes, I'm looking at you; it's not cute, boys, take some Ritalin). There are some interesting anecdotes, however, and you will discover things you didn't get in the documentary (Underoath are a Christian band, for instance). You also get to see a little more of some artists who barely made it into the film, like Atmosphere, who is a rapper, not a rocker, and thus interesting for being slightly different from the rest.

Disc 2 has all the performances from the movie uncut, two or three songs from each band. None of them really converted me over to their side, but I was pleased to see the kid from Thursday is just as likeable onstage as off. Some of the bands show they are actually quite decent musicians (Midtown, Armor for Sleep) and others come off as less adept screamers (Emanuel, Autumn for Ashes again). Other bands featured are the Starting Line, Underoath, Matchbook Romance, and the Early November.

FINAL THOUGHTS:
I give Bastards of Young a Recommended stamp for anyone who likes good documentaries about music. Director Shannon Hartman approaches this burgeoning scene with a deft hand, crafting the film in such a way that you can enjoy it even without being a fan of the particular genre of bands. On the other side, if the groups mentioned above make you salivate, then you're in for a real treat. For you, I upgrade the DVD to Highly Recommended. Bastards of Young is as much about the fans as it is about the bands, and so the package given is one that keeps the audience's obsessive nature in mind. 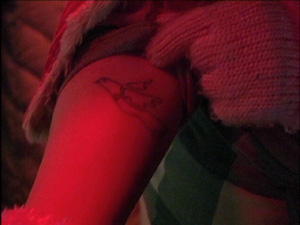