Other (International) // Unrated // April 10, 2006 // Region 2
List Price: $31.99 [Buy now and save at Xploitedcinema]
Review by Svet Atanasov | posted July 16, 2006 | E-mail the Author
The Film:
Every night, deep into the heart of Mole Antonelliana a.k.a the Museum of Cinema in Turin, Italy the lonely guard Martino (Giorgio Pasotti) would drag his skinny feet to the main screening room, place his heavy bag on the floor, and crash into one of the many velour-clad recliners. Then the man will reach into his pocket, his fingers searching for the mandatory yellow apple, while staring at the big white screen at the end of the hall. During the next couple of hours, until the sun warms the glass walls of Mole Antonelliana Buster Keaton will be Martino's best friend. 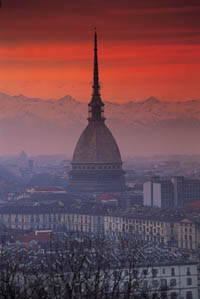 Described by many as Italy's answer to Amelie (2001), the romantic love story that left audiences around the world breathless, Dopo Mezzanotte a.k.a After Midnight (2004) is indeed a film of extraordinary beauty. Part nostalgia-piece part romantic-story with a twist this recent Italian film takes its viewers on a journey through the history of cinema (countless fragments of classic cinema are being used) while at the same time it focuses on the relationship between Martino and the lovely Amanda (Francesca Inaudi).

Not surprisingly the bigger part of the narrative in After Midnight impresses with its flexible construction. Even though the romance between Martino and Amanda is the focus of attention here there is a much stronger theme that binds the two characters: their love for cinema. Since After Midnight almost entirely takes place within the confines of Mole Antonelliana most of the feelings the couple reveals (affection, longing, etc) are also highlighted through images from notable classic films. As a result many have suggested that the true inspiration for After Midnight might have been Giuseppe Tornatore's Nuovo Cinema Paradiso (1989).

I could not resist the charm of Davide Ferrario's story either. The extraordinary architecture of the museum where the predominant amount of this film was shot coupled with the inclusion of classic film fragments is simply too much to resist. The allure of Chaplin, Keaton, and countless other characters oozing through the images Davide Ferrario has snuck in his film is so strong that more than once I caught myself losing track of the love happenings between Martino and Amanda. After Midnight is indeed too beautiful to watch! 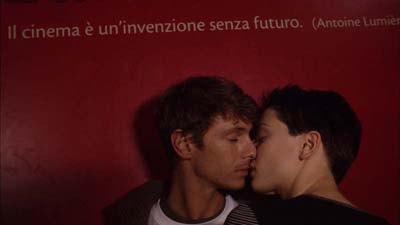 Yet, I sense that this film is somewhat ironic. The fate of the three characters (Amanda's ex-boyfriend also becomes a crucial part of the story) which I intentionally decided not to discuss in detail should provoke some interesting discussions. Not only do they undergo a very strange spiritual transformation but by all means by the time the end credits roll the viewer is left with the impression that what seems absurd in "real" life is rather logical in cinema. Love, the unifying theme in After Midnight, however, remains bitterly-sweet. Sound familiar?

Presented in its original aspect ratio of 1.78:1 and enhanced for widescreen TV's After Midnight looks stunning! This is the first disc that I've seen from UK-newcomers Yume Pictures and I am very, very impressed. Shot on DV the print herein reviewed offers an exceptional degree of detail, impeccable contrast, and virtually no-edge enhancement that I could spot. In addition when blown through a digital projector the image remains exceptionally strong (it does not break down). Superb presentation indeed!! PAL-encoded, Region 2.

Presented with an Italian 2.0 DD track After Midnight sounds quite well. As I understand the Italian disc offers a more elaborate 5.1 track but I could not find a reason why one should be overly concerned with the fact that this UK disc has only a 2.0 track. Dialog is crisp and clear, the little music available is nicely mixed with the rest of the dialog, and I could not detect any issues worth reporting here. With optional (excellent, great translation) English subtitles.

What we have here in terms of extras is: a commentary with the director Davide Ferrario in which he tends to focus on individual scenes as opposed to the bigger message the film offers. There is also some backstage footage totaling 28 minutes where the viewer is given the opportunity to follow up the cast, see how this low-budget film was shot, and spend a bit of extra time on specific scenes. Next, there is a short interview with director Davide Ferrario in which he talks how the film was made a reality as well as his contribution to the project (in text format there is also some additional information pertaining to the director's career). Last but not least we have both the Italian and British theatrical trailers for the film.

Those who enjoy intelligently-made romantic stories(believe it or not such animals do exist) are in for a great, great treat!! Somewhat reminiscent of Nuovo Cinema Paradiso (obviously with an updated scenario here) After Midnight is a delightful little film that gets just about everything right! On a side note this is my first encounter with Yume Pictures (I am eagerly anticipating their release of Yasuzo Masamura's Red Angel) and to say that I am impressed by this package would be an understatement. HIGHLY RECOMMENDED.